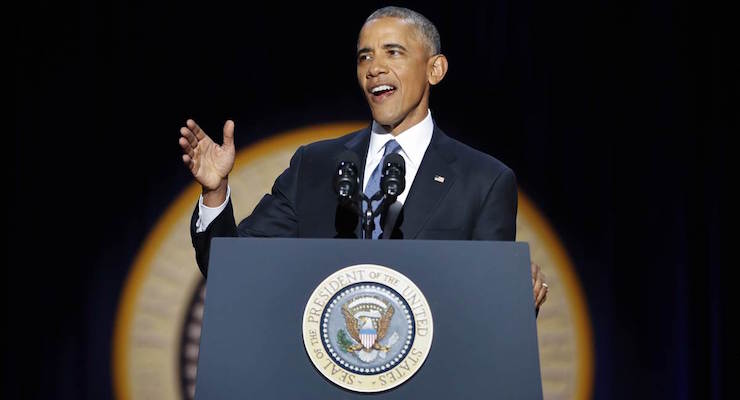 President Barack Obama gave his farewell speech Tuesday night, orating for more than 50 minutes. As noted by the Washington Examiner, his remarks were “longer than the good-bye speeches of Ronald Reagan, Bill Clinton and George W. Bush combined.”

But this wasn’t because he had a lengthy list of accomplishments.

Unless, of course, you count the bad things that happened. And there are three things on my list, if you want to know Obama’s legacy for domestic policy.

And those three things, combined with his other policies, produced dismal results.

In other words, Obama’s legacy will be failed statism.

Writing for the Orange County Register, Joel Kotkin is not impressed by Obama’s overall record.

Like a child star who reached his peak at age 15, Barack Obama could never fulfill the inflated expectations that accompanied his election. …The greatest accomplishment of the Obama presidency turned out to be his election as the first African American president. This should always be seen as a great step forward. Yet, the Obama presidency failed to accomplish the great things promised by his election: racial healing, a stronger economy, greater global influence and, perhaps most critically, the fundamental progressive “transformation” of American politics. …Eight years after his election, more Americans now consider race relations to be getting worse, and we are more ethnically divided than in any time in recent history. …if there was indeed a recovery, it was a modest one, marked by falling productivity and low levels of labor participation. We continue to see the decline of the middle class.

And Seth Lipsky writes in the New York Post that Obama’s economic legacy leaves a lot to be desired.

Obama’s is the only modern presidency that failed to show a single year of growth above 3 percent… Plus, the Obama economy failed to prosper even though the Federal Reserve had its pedal to the metal. Its quantitative easing, $2 trillion balance-sheet expansion and zero-interest-rate policy all produced zilch. …The recent declines in the unemployment rate are due less to the uptick in employed persons than to an increasing number of persons leaving the labor force.

All these accusation are very relevant, and I would add another charge to the indictment. Median household income has been stagnant during the Obama years. And the data for Obamanomics is especially grim when you compare recent years to what happened under Reagan.

By the way, the bad news isn’t limited to economic policy.

Here’s what Tim Carney of the Washington Examiner wrote about Obama’s cavalier treatment of the Bill of Rights.

The Bill of Rights is a barricade protecting Americans from their government. Part of President Obama’s legacy will be that he inflicted damage on that barricade, eroding freedom of speech, free exercise of religion, the right to bear arms and the right to due process. Through his political arguments, executive actions and political leadership, Obama has taken some of the holes punched by previous presidents and made them broader or more permanent. This means that after Obama leaves office, people will be more easily silenced, killed or disarmed by their own government.

Tim extensively documents all these transgressions in his article. The entire thing is worth reading.

To be sure, there are people who defend Obama’s legacy.

From the left, Dylan Matthews wants readers of Vox to believe that Obama has been a memorable President. And he means that in a positive sense.

Barack Obama is one of the most consequential presidents in American history — and that he will be a particularly towering figure in the history of American progressivism. He got surprisingly tough reforms to Wall Street passed as well, not to mention a stimulus package that both blunted the recession and transformed education and energy policy.

A “towering figure”? That might be an accurate description of Woodrow Wilson, the despicable person who gave us both the income tax and the federal reserve.

Or Franklin Roosevelt, who doubled the size of the federal government and wanted radical collectivism. Or Lyndon Johnson, the big spender who gave us Medicare and Medicaid.

All of those presidents changed America in very substantial (and very bad) ways.

Obama, by contrast, wanted to “fundamentally transform” America but instead turned out to be an incremental statist. Sort of like Bush.

And I can’t help but laugh at the assertion that Obama got “tough reforms to Wall Street” Dodd-Frank was supported by Goldman-Sachs and the other big players!

Let’s get back to the Matthews’ article. His strongest praise is reserved for ObamaCare.

He signed into law a comprehensive national health insurance bill, a goal that had eluded progressive presidents for a century. …it established, for the first time in history, that it was the responsibility of the United States government to provide health insurance to nearly all Americans, and it expanded Medicaid and offered hundreds of billions of dollars in insurance subsidies to fulfill that responsibility.

I’ll agree that this is Obama’s biggest left-wing accomplishment. I’ve even noted that it may be a long-term victory for the left even though Republicans now control the House and Senate in large part because of that law (and it may not even be that if GOPers get their act together and actually repeal the law).

But I hardly think it was a game-changing reform, even if it isn’t repealed. Government was already deeply enmeshed in the healthcare sector before Obama took office. ObamaCare simply moved the needle a bit further in the wrong direction. 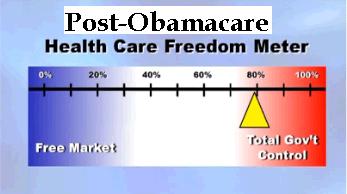 And here’s his conclusion.

You can generally divide American presidents into two camps: the mildly good or bad but ultimately forgettable (Clinton, Carter, Taft, Harrison), and the hugely consequential for good or ill (FDR, Lincoln, Nixon, Andrew Johnson). Whether you love or hate his record, there’s no question Obama’s domestic and foreign achievements place him firmly in the latter camp.

I strongly suspect that Obama will wind up in the former camp. He was bad, but largely forgettable. At least if the metric is policy.

Let’s close with a couple of observation on the political side.

I’m amused, for instance, that Obama’s bitter that he couldn’t rally the nation behind has anti-gun ideology.

President Obama said his biggest policy disappointment as president was not passing gun control laws, according to an interview CNN aired… Obama was unable to convince Congress to pass legislation that would change those policies, including enhancing background checks and not selling firearms at gun shows and other venues.

And I’m also amused that he believes the American people would have reelected him if he was on the ballot.

Arguing that Americans still subscribe to his vision of progressive change, President Barack Obama asserted in an interview recently he could have succeeded in this year’s election if he was eligible to run.

To be sure, he may be right. He definitely has better political skills than Hillary Clinton, and I’ll be the first to acknowledge that he was better at campaigning rather than governing. 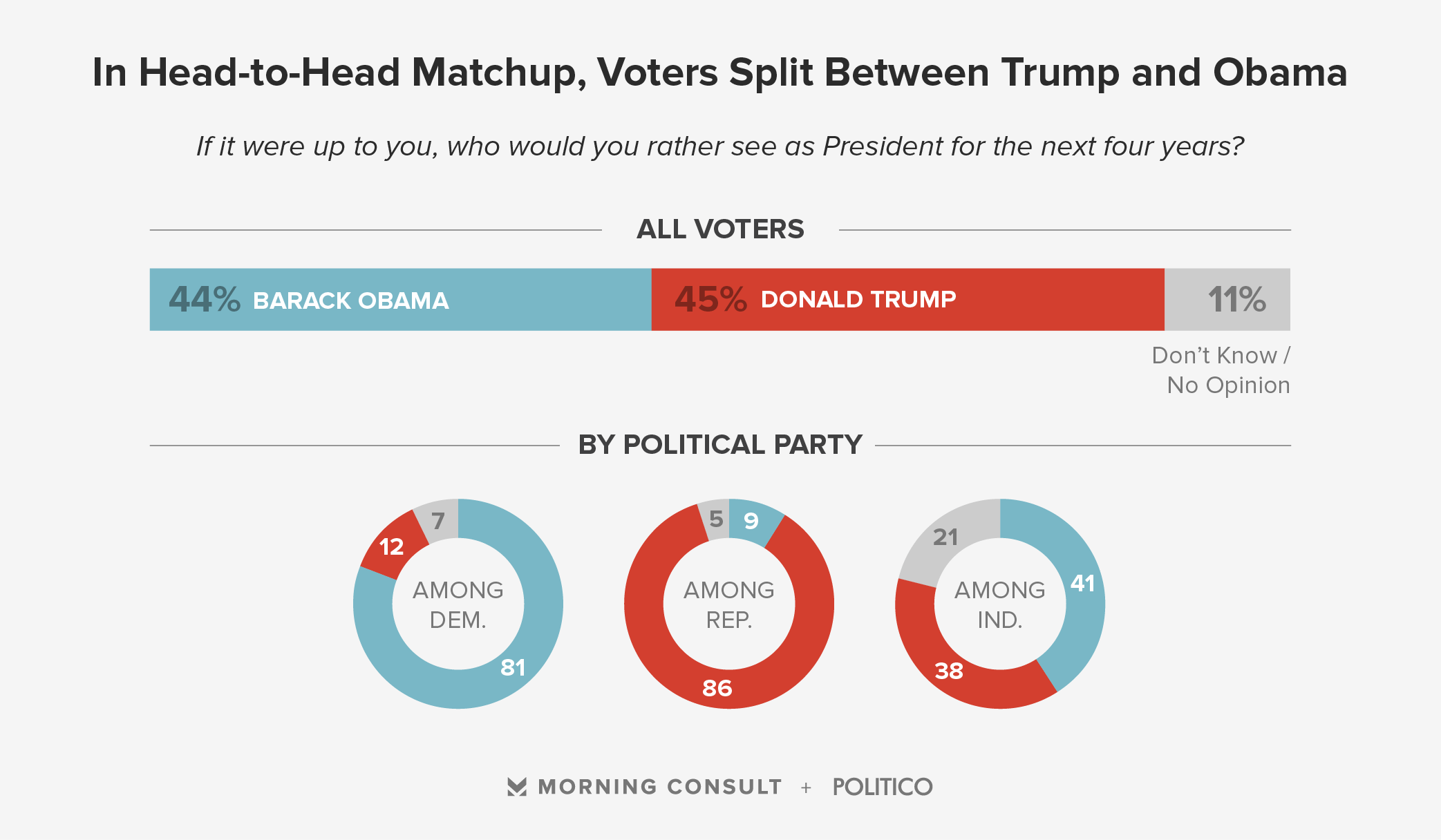 But his victories in 2008 and 2012 were against very weak Republican candidates. And it’s interesting that a hypothetical poll showed him and Trump in a statistical dead heat. Given Trump’s low approval rating, that doesn’t exactly translate into a vote of confidence for Obama.

More important, I shared some hypothetical polling data back in 2013 which showed that Reagan would have defeated Obama in a landslide.

Once again, that’s hardly a sign of Obama being a memorable or transformative President.

And I imagine Reagan would have an even bigger lead if there was a new version of the poll.

For what it’s worth, I think the most insightful analysis of Obama’s legacy comes from Philip Klein. He notes that Obama wanted Americans to believe in big government. But he failed. Miserably.

President Obama entered office in 2009 with the twin goals of expanding the role that government plays in the lives of individuals and businesses and proving to Americans that the government could be trusted to achieve big things. He was only half successful. …the gulf between his promises and the reality of what was implemented dramatically hardened public skepticism about government.

…As the Obama epoch wanes, trust in government has reached historic lows. A Pew poll last fall found that just 19 percent of Americans said they could trust the government to do the right thing most of the time — a lower percentage than during Watergate, Vietnam or the Iraq War. …Obama saw himself as the liberal answer to Reagan who could succeed where Clinton failed, putting an optimistic face on government expansion, passing historic legislation and getting Americans believing in government again. …Obama’s failure to repair the image of the federal government as a bungling institution — think of the DMV, just on a much bigger scale — will create enormous challenges for any Democratic successors trying to sell the public on the next wave of ambitious government programs.

This is spot on. I joked several years ago that the Libertarian Party should have named Obama “Man of the Year.” But given how his bad policies have made people even more hostile to big government, he might deserve “Man of the Century.”