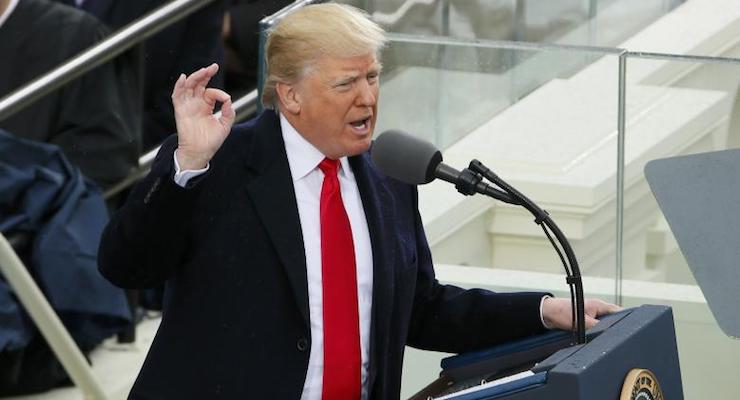 President Donald Trump delivers his speech at the inauguration ceremonies as the 45th president of the United States on the West front of the U.S. Capitol in Washington, U.S., January 20, 2017. (Photo: Reuters)

I was sitting directly under a television in a Caribbean airport yesterday when Trump got inaugurated, so I inadvertently heard his speech.

The bad news is that Trump didn’t say much about liberty or the Constitution. And, unlike Reagan, he certainly didn’t have much to say about shrinking the size and scope of Washington.

On the other hand, he excoriated Washington insiders for lining their pockets at the expense of the overall nation. And if he’s serious about curtailing sleaze in DC, the only solution is smaller government.

But is that what Trump really believes? Does he intend to move policy in the right direction?

Well, as I’ve already confessed, I don’t know what to expect. The biggest wild card, at least for fiscal policy, is whether he’ll be serious about the problem of government spending. Especially entitlements.

I’ve been advising the Trump people that he needs some genuine spending restraint (or even some semi-serious spending restraint) if he actually wants to enact his big tax cut and have it be durable. And I’ve also been reminding them that Reagan’s 1984 landslide was in part a reward for having implemented policies that triggered strong growth.

However, I gave that same advice to Bush’s people last decade and they didn’t listen, so I’m not overflowing with optimism that I’ll have more luck this time around.

But hope springs eternal, so I’m starting the Trump era with my fingers crossed that we’ll get some good reform and good results. I talk about these issues in this interview with Dana Loesch.

If I can elaborate on a couple of points from the interview, I am especially interested to see whether Republicans can actually deliver a big reduction in the corporate tax rate. Trump wants 15 percent, which would be great. House Republicans have proposed 20 percent, which also would be a big shift in the right direction.

But there are a lot of details to be addressed before a big fiscal package can be approved, including whether Trump will do something to control spending and also how he will deal with the controversial provision on border adjustability in the House plan.

Regarding employment, I mentioned that we have the good news of a lower unemployment rate combined with the bad news of too many people out of the labor force.

I shared my views on this issue for a story in USA Today.

The share of Americans working or looking for jobs is near historic lows. About 10 million prime-age men aren’t in the labor force — a lingering casualty of the Great Recession. Wage increases were stagnant at about 2% for most of the 7 ½-year-old recovery. “Several million people are not earning income, not producing,” says Dan Mitchell, senior fellow at the conservative Cato Institute. “I don’t think it’s good for the economy and it’s not good for those people.” Mitchell at least partly blames the substantial increase in the disability and food stamp rolls during and after the recession, which he says encouraged some Americans to remain idle. “We’ve expanded the welfare state,” he says.

At the risk of stating the obvious, fewer people work when you increase the benefits of not working.

Last but not least, I will confess a sin of omission. Dana mentioned the uptick in consumer spending over the holidays. That’s an important economic indicator, to be sure, but I should have taken the opportunity to explain that consumer spending and consumer sentiments are symptoms of an improving economy rather than causes of an improving economy. The focus of policy should be on how to produce higher incomes, not on how existing income is allocated.

P.S. Speaking of sins of omission, I missed an important point earlier this month in my column on Obama’s legacy. Fortunately, Ramesh Ponnuru of National Review picked up the ball with the very important point that Obama utterly failed in his desire to be a Reagan-type transformational President.

Obama…wanted to be the liberal Reagan, or rather the liberal anti-Reagan: the person who pulled American politics back to the left a generation after Reagan pulled it to the right. …the Obama project has failed. He did manage to pull his own party to the left. …On criminal justice, on entitlements, on immigration, on abortion, on religious liberty, Democrats staked out positions and adopted rhetoric that were much less moderate than they had previously been. …The Democratic strategy of the Obama years has left the party locked out of power in the White House, the Senate, and the House… At no point in Obama’s presidency did his political success make Republicans consider assimilating some of his views into their philosophy, as Bill Clinton had done with Reaganism. Republicans are even less likely to make such an adjustment now. …it is clear enough already that Obama is no Reagan.

Which gives me another opportunity to call attention to the best poll of the past eight years.

Concerns About the ‘Border Adjustable’ Tax Plan from the House GOP, Part III