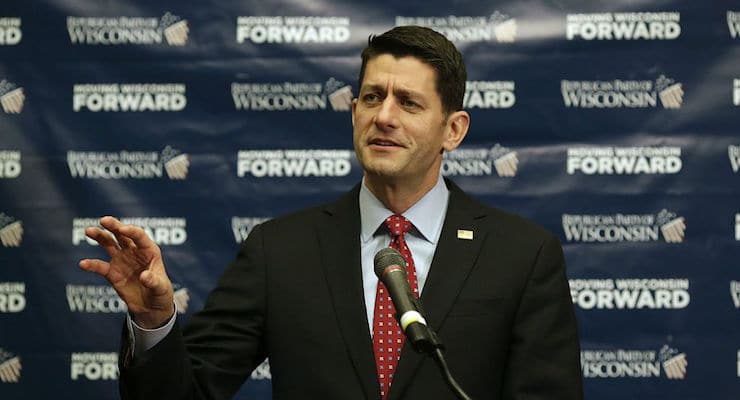 House Speaker Paul Ryan, R-Wisconsin, at a press conference during the Republican Party of Wisconsin 2016 State Convention at the KI Convention Center in Green Bay, Wisconsin, on Saturday, May 14, 2016. (Photo: AP)

I’ve been advocating for good tax reform for more than two decades, specifically agitating for a simple and fair flat tax. I get excited when politicians make bold proposals, such as many of the plans GOP presidential candidates proposed over the past year or so.

But sometimes I wind up feeling deflated when there’s a lot of discussion about tax reform and the final result is a milquetoast plan that simply rearranges the deck chairs on the Titanic. For instance, back in 2014, the then-Chairman of the House Ways and Means Committee unveiled a proposal that – at best – was underwhelming.

Shifts in the right direction in some parts of the plan were largely offset by shifts in the wrong direction in other parts of the plan. What really doomed the plan was a political decision that the tax code had to raise just as much money (on a static basis) as the current system and that there couldn’t be any reduction in the amount of class warfare embedded in the current system (i.e., the “distribution” of the tax burden couldn’t change).

Well, we have some good news. Led by the new Chairman of the Ways and Means Committee, Kevin Brady, House Republicans have unveiled a new plan that it far, far better. Instead of being hemmed in by self-imposed constraints of static revenue and distributional neutrality, their two guidelines were dynamic revenue neutrality and no tax increase for any income group.

With those far more sensible constraints, they were able to put together a plan that was almost entirely positive. Let’s look at the key features, keeping in mind these theoretical principles that should guide tax reform.

Here are the features that send a tingle up my leg (apologies to Chris Matthews).

No value-added tax – One worrisome development is that Senators Rand Paul and Ted Cruz included value-added taxes in their otherwise good tax plans. This was a horrible mistake. A value-added tax may be fine in theory, but giving politicians another source of revenue without permanently abolishing the income tax would be a tragic mistake. So when I heard that House Republicans were putting together a tax plan, I understandably was worried about the possibility of a similar mistake. I can now put my mind at rest. There’s no VAT in the plan.

Death tax repeal – Perhaps the most pure (and therefore destructive) form of double taxation is the death tax, which also is immoral since it imposes another layer of tax simply because someone dies. This egregious tax is fully repealed.

No state and local tax deduction – If it’s wrong to subsidize particular activities with special tax breaks, it’s criminally insane to use the tax code to encourage higher tax rates in states such as New York and California. So it’s excellent news that House GOPers are getting rid of the deduction for state and local taxes.

No tax bias against new investment – Another very foolish provision of the tax code is depreciation, which forces companies to pretend some of their current investment costs take place in the future. This misguided approach is replaced with expensing, which allows companies to deduct investments when they occur.

Here are the features that give me a warm and fuzzy feeling.

A 20 percent corporate tax rate – America’s corporate tax system arguably is the worst in the developed world, with a very high rate and onerous rules that make it difficult to compete in world markets. A 20 percent rate is a significant step in the right direction.

A 25 percent small business tax rate – Most businesses are not traditional corporations. Instead, they file using the individual portion of the tax code (using forms such as “Schedule C”). Lowering the tax rate on business income to 25 percent will help these Subchapter-S corporations, partnerships, and sole proprietorships.

Territorial taxation – For a wide range of reasons, including sovereignty, simplicity, and competitiveness, nations should only tax economic activity within their borders. The House GOP plan does that for business income, but apparently does not extend that proper treatment to individual capital income or individual labor income.

By shifting to this more sensibly designed system of business taxation, the Republican plan will eliminate any incentive for corporate inversions and make America a much more attractive place for multinational firms.

Here are the features that I like but don’t go far enough.

Less double taxation of savings – The plan provides a 50-percent exclusion for individual capital income, which basically means that there’s double taxation of interest, dividends, and capital gains, but at only half the normal rate of tax. There’s also some expansion of tax-neutral savings accounts, which would allow some saving and investment fully protected from double taxation.

Simplification – House GOPers assert that all their proposed reforms, if enacted, would create a much simpler tax system. It wouldn’t result in a pure Hall-Rabushka-style flat tax, with a 10-line postcard for a tax return, but it would be very close. Here’s their tax return with 14 lines.

In an ideal world, there should be no double taxation of income that is saved and invested, so line 2 could disappear (in Hall-Rabushka flat tax, investment income/capital income is taxed once and only once at the business level). All savings receives back-ended IRA (Roth IRA) treatment in a pure flat tax, so there’s no need for line 3. There is a family-based allowance in a flat tax, which is akin to lines 4 and 9, but there are no deductions, so line 5 and line 6 could disappear. Likewise, there would be no redistribution laundered through the tax code, so line 10 would vanish. As would line 11 since there are no special preferences for higher education.

But I don’t want to make the perfect the enemy of the good. The postcard shown above may have four more lines than I would like, but it’s obviously far better than the current system.

Increase in the double taxation of interest – Under current law, companies can deduct the interest they pay and recipients of interest income must pay tax on those funds. This actually is correct treatment, particularly when compared to dividends, which are not deductible to companies (meaning they pay tax on those funds) while also being taxable for recipients. The House GOP plan gets rid of the deduction for interest paid. Combined with the 50 percent exclusion for individual capital income, that basically means the income is getting taxed 1-1/2 times. But that rule would apply equally for shareholders and bondholders, so that pro-debt bias in the tax code would be eliminated. And the revenue generated by disallowing any deduction for interest would be used for pro-growth reforms such as a lower corporate tax rate.

No tax on income generated by exports and no deduction for cost of imported inputs for companies – The House GOP proposal is designed to be “border adjustable,” which basically means the goal is to have no tax on exports while levying taxes on imports. I’ve never understood why politicians think it’s a good idea to have higher taxes on what Americans consume and lower taxes on what foreigners consume. Moreover, border adjustability normally is a feature of a “destination-based” value-added tax (which, thankfully, is not part of the GOP plan), so it’s not completely clear how the tax-on-imports  portion would be achieved. If I understand correctly, there would be no deduction for the cost of foreign purchases by American firms. That’s borderline protectionist, if not over-the-line protectionist. And it’s unclear whether this approach would pass muster with the World Trade Organization.

To conclude, the GOP plan isn’t perfect, but it’s very good considering the self-imposed boundaries of dynamic revenue neutrality and favorable outcomes for all income groups.

And since those self-imposed constraints make the plan politically viable (unlike, say, the Trump plan, which is a huge tax cut but unrealistic in the absence of concomitant savings from the spending side of the budget), it’s actually possible to envision it becoming law.