The good news is that the House put together an Obamacare-repeal bill that reduced the fiscal burden of government. The bad news is that the legislation didn’t address the regulations and interventions that produce rising costs and sectoral inefficiency because of the third-party payer problem.

Whether the bill was a net plus is now moot since it didn’t have enough votes for approval. And the withdrawal of the legislation has generated a bunch of stories on whether Trump and congressional Republicans are incapable of governing.

In particular since it appears that GOPers also seem incapable of coming to agreement on how to reduce the tax burden. I commented on the dysfunctional state of affairs in this interview with Neil Cavuto.

The bottom line is that there are big divisions. There is (thankfully) a lot of opposition to the border-adjustable tax, and there’s also no agreement on whether the tax plan should be a pure tax cut or whether it should be a revenue-neutral package that finances lower tax rates by eliminating or curtailing undesirable preferences.

Jason Furman, who was the Chairman of Obama’s Council of Economic Advisers, suggest that Republican divisions won’t matter if tax reform becomes a bipartisan issue. But I’m not overly impressed by the five conditions he outlines in a column in today’s Wall Street Journal.

It’s unclear if Furman considers the five conditions a package deal. If so, there is zero chance of bipartisanship because Republicans presumably will not agree if they are bound by distributional neutrality.

But if a “business taxes only” agenda can get some Democrats on board, then there may be hope. Especially since that may make a virtue out of necessity, as I suggested in the interview.

And for those who question whether lowering the corporate tax rate is important, here’s an argument-ending chart from a recent Tax Foundation publication. Keep in mind that the U.S. corporate rate (including state levies) is 39 percent. 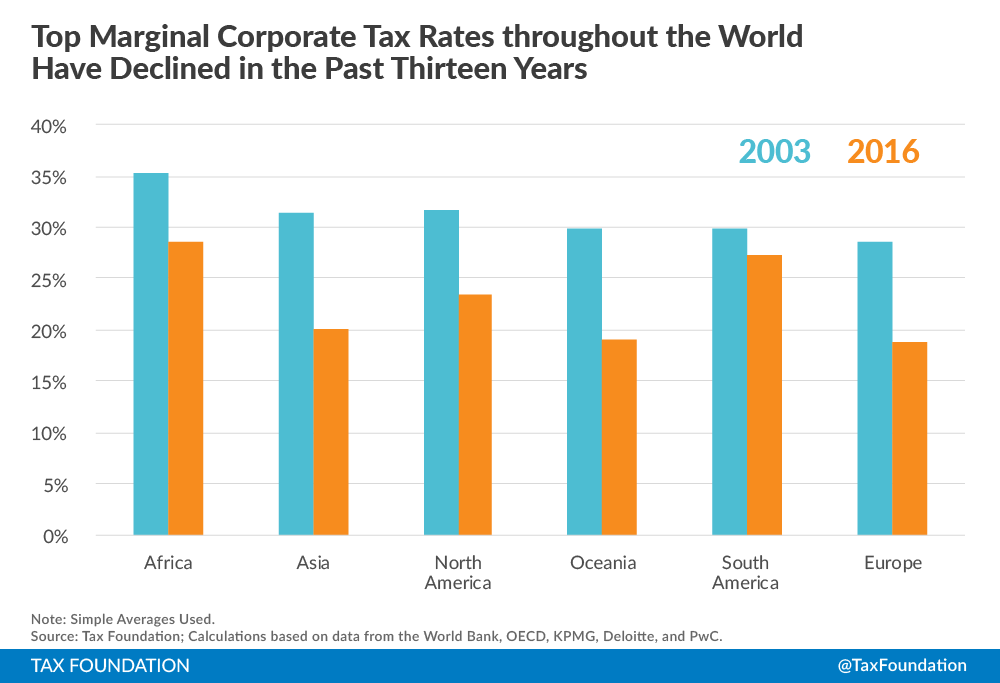 It’s particularly noteworthy that average corporate tax rates in Europe and Asia are about 20 percent, far lower than the tax burden imposed on companies in the United States.

No wonder many American companies have redomiciled to other nations.

The ultimate answer is to junk the entire tax code and adopt a simple and fair flat tax. The best-possible answer we may get out of dysfunctional Washington is probably a lower corporate rate.