HomePolicyLearning From the UK About the Laffer Curve, Dynamic Scoring and Class-Warfare Taxes

Learning From the UK About the Laffer Curve, Dynamic Scoring and Class-Warfare Taxes

As far as I’m concerned, no sentient human being could look at what happened in the United States in the 1980s and not agree that high tax rates on upper-income taxpayers are foolish and self-destructive.

Not only did the economy grow faster after Reagan lowered rates, but the IRS even collected more revenue (a lot more revenue) because rich people earned and reported so much additional income.

That should be a win-win for all sides, though there are some leftists who hate the rich more than they like additional revenue.

Anyhow, I raise this example because there are politicians today who think it’s a good idea to go back to the punitive tax policy that existed in the 1970s.

Hillary Clinton proposed big tax hikes in last year’s campaign. And now, as reported by the U.K.-based Times, the Labour Party across the ocean is openly embracing a soak-the-rich agenda.

Labour’s tax raid on the country’s 1.3 million highest earners could raise less than half the £4.5 billion claimed by the party, experts said last night. The policy was announced by Jeremy Corbyn as part of plans to raise £48 billion through tax increases. …At the manifesto’s heart are plans to lower the threshold for the 45p tax rate from £150,000 to £80,000 and introduce a 50p tax band for those earning more than £123,000 a year. …Labour said that the increases could raise as much as £6.4 billion to help to fund giveaways such as the scrapping of tuition fees and more cash for the NHS, schools and childcare.

Here’s a chart from the article, showing who gets directly hurt by Corbyn’s class-warfare scheme. 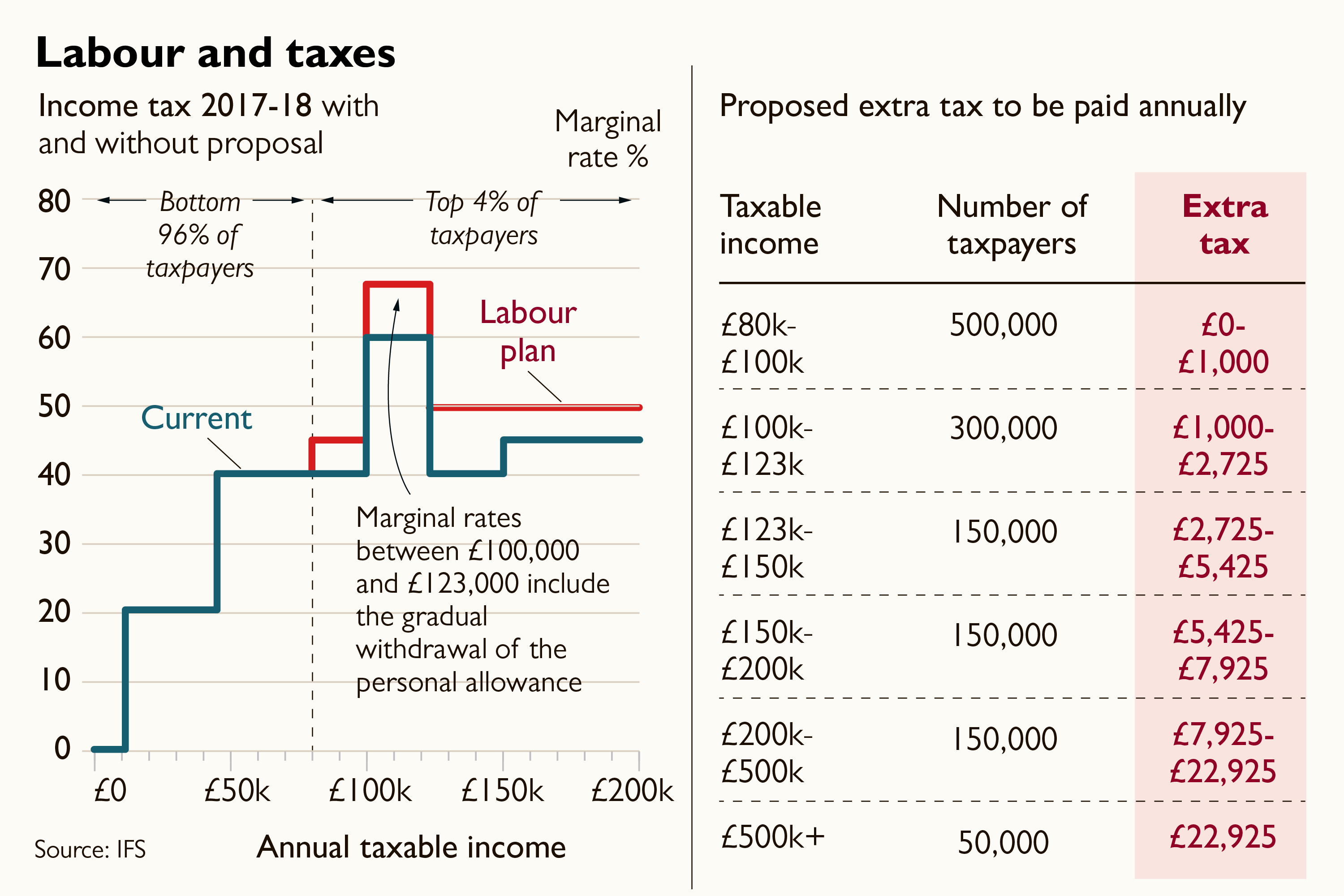 But here’s the amazing part of the article.

The Labour Party, which has become radically left wing under Corbyn, openly acknowledges that the Laffer Curve is real and that there will be negative revenue feedback.

Under Labour’s calculation, if no one changed their behaviour as a result of the tax changes, a future government would raise an extra £6.4 billion a year. In its spending commitments the party is assuming that the new measures would bring in about £4.5 billion.

This is remarkable. The hard-left Labour Party admits that about 30 percent of the tax increase will disappear because taxpayers will respond by earning and/or reporting less taxable income.

That’s a huge concession to the real world, which is more than Barack Obama or Hillary Clinton ever did. Welcome to the supply side, Jeremy Corbyn!

Moreover, establishment organizations such as the Institute for Fiscal Studies also incorporate the Laffer Curve in their analysis. But even more so.

They say Labour’s class-warfare tax hike would – at best – raise less than half as much as the static revenue estimate.

The IFS said that even this reduced figure looked optimistic and the changes were more likely to raise £2 billion to £3 billion — about half the amount claimed. “The amount of extra revenue these higher tax rates would raise is very uncertain,” Paul Johnson, director of the IFS, said. “What we do know is that raising tax levels on those people earning over £150,000 does not bring in additional revenues because the kind of people on these kinds of incomes are significantly more able to work around the tax system.

The official revenue-estimating body on Capitol Hill, the Joint Committee on Taxation, has only taken baby steps in the direction of dynamic scoring (which is an improvement over their old approach of static scoring, but they still have a long way to go).

Fortunately, there are some private groups who do revenue estimates, similar to the IFS in the UK.

The Committee for a Responsible Federal Budget put together this very useful table comparing how the Tax Foundation and the Tax Policy Center “scored” the Better Way Plan.

The key numbers are in the dark blue rows. As you can see, the Tax Foundation assumes about 90% revenue feedback, while the left-leaning Tax Policy Center only projects about 22 percent revenue feedback.

Indeed, the Labour Party’s tax hike is focused on upper-income taxpayers, who do have more ability to respond when there are changes in tax policy, so a high number is appropriate. However, there are some very pro-growth provisions in the Better Way Plan, such as a lower corporate tax rate, expensing, death tax repeal, etc, so I definitely think the Tax Foundation’s projections are closer to the truth.

For policy wonks, Alan Cole of the Tax Foundation explained why their numbers tend to differ.

The bottom line is that we are slowly but surely making progress on dynamic scoring. Even folks on the left openly acknowledge that higher tax rates impose at least some damage. You know what they say about a journey of a thousand miles.