Votes on the American Health Care Act (AHCA) in Congress.

Back in 2015, I basically applauded the Congressional Budget Office (CBO) for its analysis of what would happen if ObamaCare was repealed. The agency’s number crunchers didn’t get it exactly right, but they actually took important steps and produced numbers showing how the law was hurting taxpayers and the economy.

Now we have a new set of ObamaCare numbers from CBO based on the partial repeal bill approved by the House of Representatives. The good news is that the bureaucrats show substantial fiscal benefits. There would be a significant reduction in the burden of spending and taxation.

But the CBO did not show very favorable numbers in other areas, most notably when it said that 23 million additional people would be uninsured if the legislation was enacted.

Part of the problem is that Republicans aren’t actually repealing ObamaCare. Many of the regulations that drive up the cost of health insurance are left in place.

My colleague at Cato, Michael Cannon, explains why this is a big mistake.

Rather than do what their supporters sent them to Washington to do – repeal ObamaCare and replace it with free-market reforms – House Republicans are pushing a bill that will increase health-insurance premiums, make health insurance worse for the sick… ObamaCare’s core provisions are the “community rating” price controls and other regulations that (supposedly) end discrimination against patients with preexisting conditions. …Community rating is the reason former president Bill Clinton called ObamaCare “the craziest thing in the world” where Americans “wind up with their premiums doubled and their coverage cut in half.” Community rating is why women age 55 to 64 have seen the highest premium increases under ObamaCare. It is the principal reason ObamaCare has caused overall premiums to double in just four years. Community rating literally penalizes quality coverage for the sick… ObamaCare is community rating. The AHCA does not repeal community rating. Therefore, the AHCA does not repeal ObamaCare.

It would be ideal if Republicans fully repealed Obamacare.

Heck, they should also address the other programs and policies

that have messed up America’s healthcare system and caused a third-party payer crisis.

That means further reforms to Medicaid, as well as Medicare and the tax code’s exclusion of fringe benefits.

But maybe that’s hoping for too much since many Republicans are squeamish about supporting even a watered-down proposal to modify Obamacare.

That being said, there are some reasonable complaints that CBO overstated the impact of the GOP bill.

Doug Badger and Grace Marie Turner, for instance, were not impressed by CBO’s methodology.

The Congressional Budget Office (CBO) launched its latest mistaken Obamacare-related estimate this week, predicting that a House-passed bill to repeal and replace the embattled law would lead to 23 million more uninsured people by 2026. …the agency’s errors are not only massive – one of their predictions of 2016 exchange-based enrollment missed by 140%… Undaunted by failure and unschooled by experience, CBO soldiers on, fearlessly predicting that millions will flock to the exchanges any day now.  …CBO measures the House-passed bill against this imaginary baseline and finds it wanting. …One reason CBO gets it so wrong so consistently is its fervent belief that the individual mandate has motivated millions to enroll in coverage.  …CBO’s belief in the power of the individual mandate is misplaced. …The IRS reports that in the 2015 tax year, 6.5 million uninsured filers paid the tax penalty, 12.7 million got an exemption and additional 4.2 million people simply ignored the penalty.  They left line 61 on their form 1040 blank, refusing to tell the government whether or not they had insurance.  …In all, that is a total of 23.4 million uninsured people – out of an estimated 28.8 million uninsured – who either paid, avoided or ignored the penalty.  That hardly suggests that the mandate has worked.

The Wall Street Journal also was quite critical of the CBO analysis.

…the budget scorekeepers claim the House bill could degrade the quality of insurance. This editorializing could use some scrutiny. Without government supervision of insurance minutiae and a mandate to buy coverage or pay a penalty, CBO asserts, “a few million” people will turn to insurance that falls short of the “widely accepted definition” of “a comprehensive major medical policy.” They might select certain forms of coverage that Obama Care banned, like “mini-med” plans with low costs and low benefits.

Or they might select indemnity plans that pay a fixed-dollar amount per day for illness or hospitalization, or dental-only or vision-only single-service plans. CBO decided to classify these people as “uninsured,” though without identifying who accepts ObamaCare’s definition of standardized health benefits and why they deserve to substitute their judgment for the choices of individual consumers. …But the strangest part of CBO’s preoccupation with “high-cost medical events” is that the analysts never once mention catastrophic coverage—not once. These types of plans didn’t cover routine medical expenses but they did protect consumers against, well, a high-cost medical event like an accident or the diagnosis of a serious illness. Those plans answered what most people want most out of insurance—financial security and a guarantee that they won’t be bankrupted by cancer or a distracted bus driver. …under the House reform Americans won’t have any problem insuring against a bad health event, even if CBO won’t admit it. …CBO has become a fear factory because it prefers having government decide for everybody.

Drawing on his first-hand knowledge, Dr. Marc Siegel wrote on the issue for Fox News.

…23 million…will lose their health insurance by 2026 if the American Health Care Act, the bill the House passed to replace ObamaCare, is passed in the Senate and signed by President Trump. This number is concerning — until you look at it and the CBO’s handling of the health care bills more closely. …First, the CBO was wildly inaccurate when it came to ObamaCare, predicting that 23 million people would be getting policies via the exchanges by 2016. The actual number ended up being only 10.4 million… Second, many who chose to buy insurance on the exchanges did so only because they wanted to avoid paying the penalty, not because they needed or wanted the insurance. Many didn’t buy insurance until they got sick.

The Oklahoman panned the CBO’s calculations.

IN the real world, people who don’t have insurance coverage cannot lose it. Yet…the CBO estimates 14 million fewer people will have coverage in 2018 if the House bill is enacted than would be the case if the ACA is left intact, and 23 million fewer by 2026. …In 2016, there were roughly 10 million people obtaining insurance through an Obamacare exchange. The CBO estimated that number would suddenly surge to 18 million by 2018 if the law was left intact, but that far fewer people would be covered if the House reforms became law. Put simply, the CBO estimated that millions of people who don’t have insurance through an exchange today would “lose” coverage they would otherwise obtain next year. That’s doubtful. …At one point, the office estimated 22 million people would receive insurance through an Obamacare exchange by 2016. As already noted, the actual figure was less than half that. One major reason for the CBO being so far off the mark is that federal forecasters believed Obamacare’s individual mandate would cause people to buy insurance, regardless of cost. That hasn’t proven true. …In a nutshell, the CBO predicts reform would cause millions to lose coverage they don’t now have, and that millions more would eagerly reject the coverage they do have because it’s such a bad deal. Those aren’t conclusions that bolster the case for Obamacare.

And here are passages from another WSJ editorial.

CBO says 14 million fewer people on net would be insured in 2018 relative to the ObamaCare status quo, rising to 23 million in 2026. The political left has defined this as “losing coverage.” 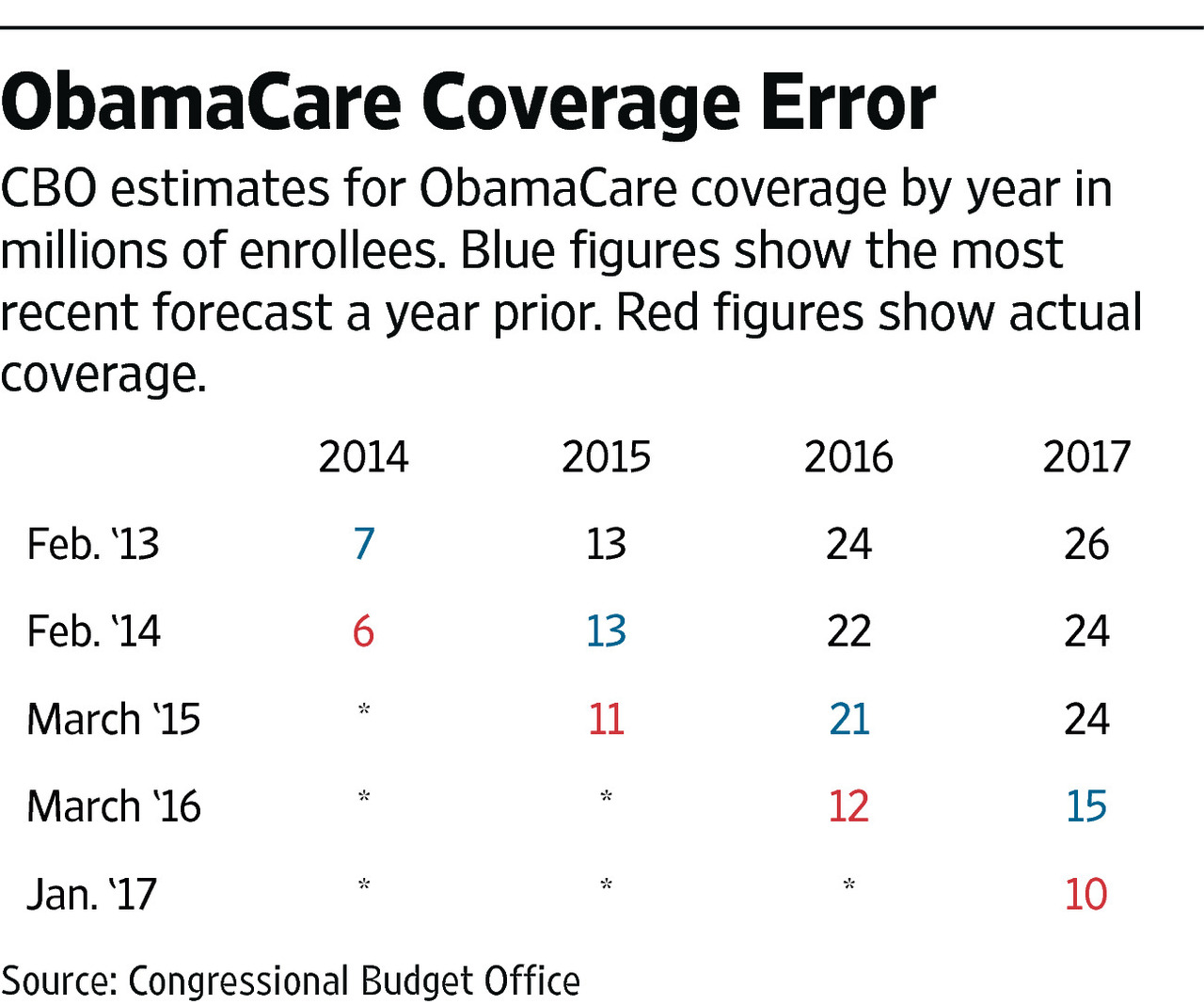 But 14 million would roll off Medicaid as the program shifted to block grants, which is a mere 17% drop in enrollment after the ObamaCare expansion. The safety net would work better if it prioritized the poor and disabled with a somewhat lower number of able-bodied, working-age adults. The balance of beneficiaries “losing coverage” would not enroll in insurance, CBO says, “because the penalty for not having insurance would be eliminated.” In other words, without the threat of government to buy insurance or else pay a penalty, some people will conclude that ObamaCare coverage isn’t worth the price even with subsidies. …CBO’s projections about ObamaCare enrollment…were consistently too high and discredited by reality year after year. CBO is also generally wrong in the opposite direction about market-based reforms, such as the 2003 Medicare drug benefit whose costs the CBO badly overestimated.

My complaints about the CBO largely revolve around its dogged refusal to adjust its computations to the ever-more-apparent failings of the Affordable Care Act. When the CBO says that 23 million fewer people will have insurance coverage under the AHCA than under the ACA — a statistic that politics have converted into a mantra —  that figure is predicated on an ACA that no longer exists. It is based on the continuing assumption that the ACA will have 18 million people enrolled on its exchanges in 2018 and that this situation will persist until 2026. I know no one on any side of the political spectrum who believes this to be true. The ACA has about 11 million people currently enrolled on its exchanges in 2017 and, with premiums going up, some insurers withdrawing from various markets, and the executive branch fuzzing up whether the individual mandate will actually be enforced. The consensus is that ACA enrollment will stay the same or go down, not increase 60%.

And here’s some of what Drew Gonshorowski wrote for the Daily Signal.

…reducing premium levels by rolling back regulations could actually have the effect of making plans more desirable for individuals looking to pay less. The CBO lacks any real discussion of these positive effects. …The CBO’s score on Medicaid…reflects that it assumes more states would likely have expanded in the future under the Affordable Care Act. Thus, its projection that 14 million fewer people would be insured due to not having Medicaid under the American Health Care Act might be overstated… CBO…assumes the Affordable Care Act will enroll 7 to 8 million more people in the individual market, when in reality it does not appear this will be the case

Last but not least, my former colleague Robert Moffit expressed concerns in a column for USA Today. The part that caught my eye was that CBO has a less-than-stellar track record on Obamacare projections.

The GOP should be skeptical of CBO’s coverage estimates. It has been an abysmal performance. For example, CBO projected initially that 21 million persons would enroll in exchange plans in 2016. The actual enrollment: 11.5 million.

The bottom line is that CBO overstated the benefits of Obamacare, at least as measured by the number of people who would sign up for the program.

The bureaucrats were way off.

Yet CBO continues to use those inaccurate numbers, creating a make-believe baseline that is then used to estimate a large number of uninsured people if the Republican bill is enacted.

This is sort of like the “baseline math” that is used to measure supposed spending cuts when the budget actually is getting bigger.

Illinois on the Brink of Fiscal Meltdown