HomePolicyThe IMF’s Recipe for Equal Levels of Decline and Stagnation

The IMF’s Recipe for Equal Levels of Decline and Stagnation

Inequality is now a major dividing line in the world of public policy. Supporters of limited government think it’s not a big issue and instead focus on the policies that are most likely to generate growth. Simply stated, they tend not to care if some people get richer faster than other people get richer, assuming, of course, that income is honestly earned and not the result of cronyism.

Folks on the left, by contrast, think inequality is inherently bad. It’s almost as if they think that the economy is a fixed pie and that a big slice for the “rich” necessarily means smaller slices for the rest of us. They favor lots of redistribution via punitive taxes and an expansive welfare state.

When talking to such people, my first priority is getting them to understand that it’s possible for an economy to grow and for all income groups to benefit. I explain how even small differences in long-run growth make a big difference over just a few decades and that it is very misguided to impose policies that will discourage growth by penalizing the rich and discouraging the poor.

I sometimes wonder how vigorously to present my argument. Is it actually true, as Margaret hatcher and Churchill argued, that leftists are willing to hurt poor people if that’s what is necessary to hurt rich people by a greater amount?

Seems implausible, so when I recently noticed this amusing humor on Reddit‘s libertarian page, I was not going to share it. After all, it presumes that our friends on the left genuinely would prefer equal levels of poverty rather than unequal levels of prosperity. 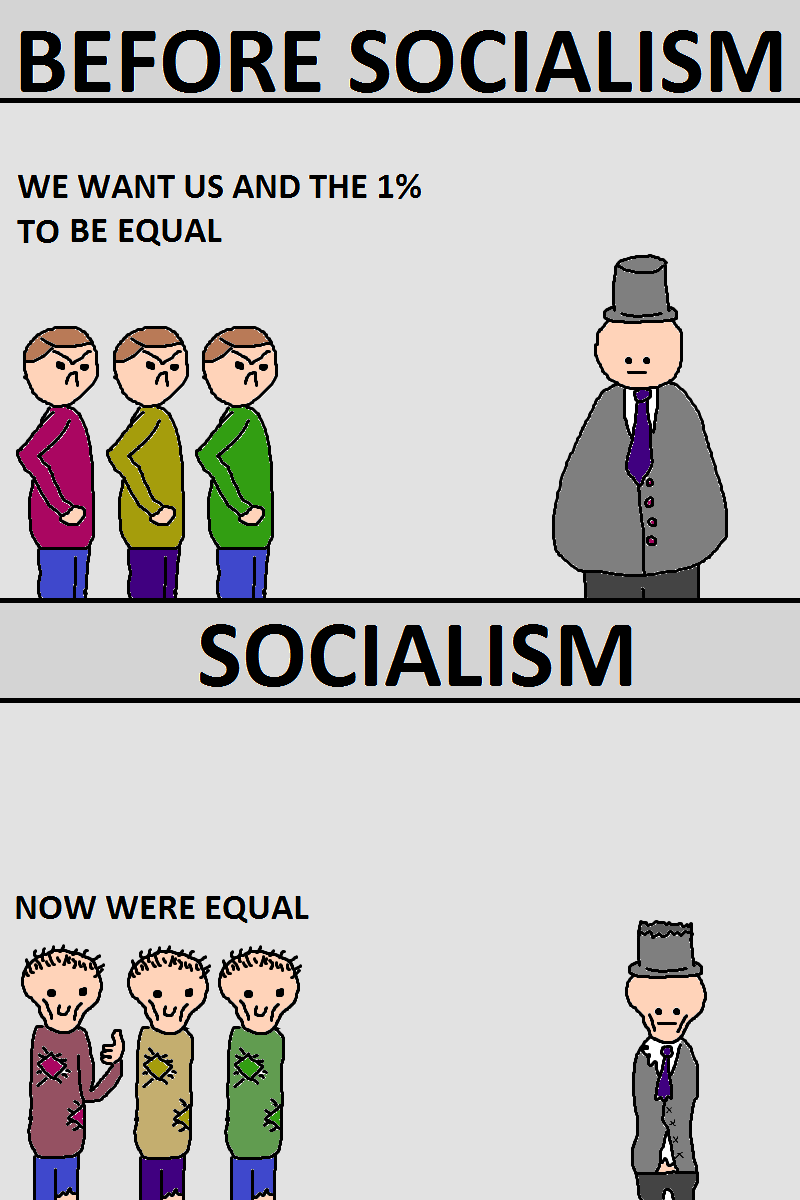 But, after reading a new study from the International Monetary Fund (IMF), I’m wondering if I’m underestimating the left’s fixation with inequality and the amount of economic damage they’re willing to inflict to achiever greater equality of outcomes.

Here are some introductory passages to explain the goal of the research.

…it is worth reemphasizing some lessons from the “old masters” in economics who addressed this topic a few decades ago—including Arthur M. Okun and Anthony B. Atkinson in the 1970s. Their lessons—on how to elicit people’s views on inequality and how to summarize societal welfare using a monetary indicator encompassing both average incomes and their distribution—remain relevant for fiscal policymakers today. …a satisfactory theory of welfare must recognize that welfare depends on both the size and the distribution of national income. …This primer seeks to encourage more widespread use by policymakers of the tools developed by welfare theory. …the primer provides an in-depth, step-by-step refresher on two specific tools chosen because of their simplicity and intuitive appeal: Okun’s “leaky bucket” and Atkinson’s “equally-distributed-equivalent income.”

Please note that the IMF explicitly is saying that it wants policymakers to change laws based on what’s in the study.

And, as you continue reading, it should become obvious that the bureaucrats are pushing a very radical agenda, not that we should be surprised given the IMF’s track record.

Here’s the bureaucracy’s take on Okun and his pro-redistribution agenda.

Okun (1975) proposed a thought experiment capable of eliciting people’s attitudes toward the trade -off between equality and efficiency: Okun asked the reader to consider five families: a richer one making $45,000 (in 1975) and four poorer ones making $5,000. Would the reader favor a scheme that taxed the rich family $4,000 and transferred the proceeds to the poorer families? In principle, each poorer family would receive $1,000. But what if 10 percent leaked out, with only $900 reaching the recipients? What would the maximum acceptable leak be? The leak represented not only the administrative costs of tax-and-transfer programs (and, one might add, potential losses due to corruption), but also the fact that such programs reduce the economic incentives to work. …Okun reported his own answers to the specific exercise he proposed (his personal preference was for a leakage of no more than 60 percent). ….Okun was willing to accept that a $4,000 tax on the rich household [would] translate, with a 60 percent leakage, into a $400 transfer to each of the four poor households.

The only good part about Okun’s equity-efficiency tradeoff is that he acknowledges that redistribution harms the economy. The disturbing part is that he was willing to accept 60 percent leakage in order to take money from some and give it to others.

It gets worse. When the IMF mixes Okun with Atkinson, that’s when things head in the wrong direction even faster. As I noted last month, Atkinson has a theory designed to justify big declines in national income if what’s left is distributed more equally. I’m not joking.

And that IMF wants to impose this crazy theory on the world.

Atkinson (1970) showed that under the assumptions above and having identified a coefficient of aversion to inequality, it becomes easy to summarize the well-being of all households in an economy with a single, intuitive measure: the equally-distributed-equivalent income (EDEI), i.e., the income that an external observer would consider just as desirable as the existing income distribution. …The percentage loss in mean income—compared with the initial situation—that an observer would find acceptable to have a perfectly equal distribution of incomes was introduced by Atkinson (1970) as a measure of inequality.

The study then purports to measure “aversion to inequality” in order to calculate equally-distributed-equivalent income (EDEI).

The greater the observers’ aversion to inequality, the lower the EDEI. Table (2) reports for a few alternative ε coefficients, for the example above.

Here’s a table from the study, which is based on a theoretical rich person with $45,000 and a theoretical poor person with $5,000 of income. A society that isn’t very worried about inequality (ε = 0.2) is willing to sacrifice about $4,000 on overall income to achieve the desired EDEI. But a nation fixated on equality of outcomes might be willing to sacrifice $32,000 (more than 60 percent of overall income!).

I’ve augmented the table with a few of the aggregate income losses in red.

In other words, nations that have a higher aversion to inequality are the ones that prefer lots of misery and deprivation so long as everyone suffers equally.

Another use of this data is that it allows the IMF to create dodgy data on income, sort of like what the Organization for Economic Cooperation and Development (OECD) does with poverty numbers.

It appears the bureaucrats want to use EDEI to claim that poorer nations have more income than richer nations.

Here’s a table from the study and you can see how the United States becomes a comparatively poor nation (highlighted in red) when there’s an “aversion” to inequality.

In other word, even though the United States has much higher living standards than European nations, the IMF is peddling dodgy numbers implying just the opposite.

But the real tragedy is that low-income people will be much more likely to remain poor with the policies that the IMF advocates.

The Most Depressing Chart about Japan