Heather Mac Donald Sells The Diversity Delusion Like an Academic, Not a TV Personality

A few week ago, I saw Heather Mac Donald at The Metropolitan Republican Club in New York City, or as members and frequent attendees prefer, simply The MetClub. She was invited to discuss her new book, The Diversity Delusion: How Race and Gender Pandering Corrupt the University and Undermine Our Culture.

Ms. Mac Donald is a dynamo of slight build and silver tongue that charges unapologetically head-on into subject matter most would prefer to avoid.

While others have made a career of chastising the PC Culture with well-versed examples of hypocrisy and self-serving intent, Mac Donald takes it to such a higher level of academic prosecution, minus the verbal and visual theatrics.

Equipped with a litany of academic studies at her fingertips, her delivery confidently exposes the dysfunction of diversity, as having become the end game, initially at “The University” and ultimately within large swathes of the corporate world.

This was not Mac Donald’s first appearance at the MetClub, and the venue was a setting where she was certainly at ease. 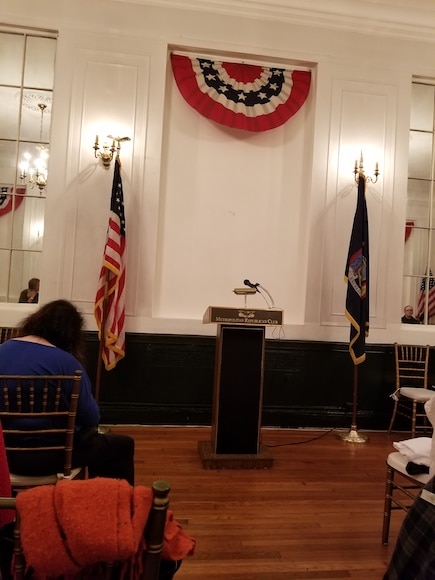 The club itself is a throwback, steeped in history, sporting an esteemed membership roster of political luminaries, dating back to the very early 1900s. Presidents Teddy Roosevelt and Richard Nixon were members, as was New York Governor Tom Dewey, Senator Jacob Javitz, and numerous NY City mayors, including Fiorello LaGuardia, John Lindsay (yes, he was originally a Republican), Rudy Giuliani, and Michael Bloomberg (yes, he was once a Republican also).

Set in a no-frills, federal-style townhouse in Manhattan’s upper east side, the club is a setting from vintage Americana. Traditional red, white and blue bunting adorns the ballroom perimeter, a perfect touch for what could easily be the backdrop of a Norman Rockwell painting, or a movie set for a mid 20th century patriotic revival.

Deborah Coughlin has served as president since 2015, and is the stalwart voice and promoter of the Metropolitan Republican Club. She has presided over a vibrant speaker series during her tenure that has included Ann Coulter, James O’Keefe, Ted Cruz, Newt Gingrich, Tucker Carlson, and Brandon Straka.

This brings us back to Heather Mac Donald. Her full frontal indictment of what she coined “narcissistic victimology” addresses the failure of race- and gender-based diversity, no-holds barred. She even has the audacity to go right after what she terms the “campus rape myth”.

As if that wasn’t enough, it’s followed up by an indictment of the #MeToo movement’s “impossible premise”.

She makes this all work with hard facts produced by countless studies, real cases that have been unequivocally proven not just to have been erroneous but also to have produced sweeping false narratives of “delusional victimology”.

And if this isn’t enough, the majority of university faculty and administrators are not only complicit, but encourage and enable this victimhood ideology. This of course facilitates the hiring of more deans of diversity, thus expanding the size and scope of the University Administration.

There is no timidity in a Heather Mac Donald lecture.

She has total confidence in her convictions that all the craziness on college campuses — from anti-free speech crusaders to safe-space sympathizers to micro aggression madness, which all lead to the virus of victimhood — has to stop before it does any more longterm damage to society.

Just ask the students at Columbia University, who heard her speak the day prior. I’m sure she didn’t sugarcoat it one bit.

The Diversity Delusion: How Race and Gender Pandering Corrupt the University and Undermine Our Culture

Tim is a native of Grand Rapids, Michigan, who nows works in the New York City area. His areas of expertise include business, economics and politics.