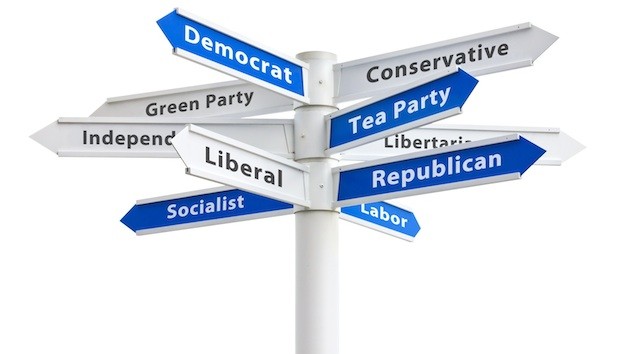 Political parties on a crossroads sign featuring Republicans and Democrats. PPD regularly tracks party ID, as well as other public polling conducted by Gallup, Rasmussen Reports, Reuters, and many more.

A new survey from Gallup found the number of Americans identifying as independents is at a record high, and Democrats have a slight party ID edge. Since the results, my Twitter feed and email box have lit up like a Christmas tree with comments and questions, most of which claiming an opportunity for the emergence of a third party.

The Christian Science Monitor even published an article entitled, Party’s over? Record voters say they’re Independents, reject ‘D’ and ‘R’, in which they cited low turnout as further evidence a “record number of American voters” who “are rejecting both major political parties.”

Regarding turnout, our previous post-2014 election analysis called the low-turnout argument the “top midterm myth” because, while it is true that turnout was abysmally low nationwide, states with competitive Senate races actually saw record-high turnouts for midterm cycles. I won’t re-litigate that in this article — though readers should check it out — but I will say the bottom line is that turnout numbers by region in 2014 spoke more to the influence of super PAC spending than voters’ sentiments toward political parties.

Nevertheless, I thought it appropriate to dig into Gallup’s latest numbers a bit to help explain their implications.

“The most important fact we see is that the number of Americans who identify as independents is at a record high,” Gallup editor-in-chief Frank Newport said. “43 percent identified as independents when we asked them if you are Republican, independent, or Democrat.”

The truth is, with the exception of post-election surveys, which unsurprisingly show more Americans identifying with the winning party, this overall trend has been ongoing for at least two decades. From 1980, Democrats have held a consistent advantage — 10 points on average — yet they will have only occupied the White House for 16 out of the 36 years since, by the end of Obama’s term.

For starters, party ID is fluid, which is why “unskewing” polls based on pollsters’ R/D/I split is preposterous.

In the Gallup tracking poll conducted immediately after the 2014 midterm elections — a wave election that gave the GOP their largest majority in the House since the 1920s, a new majority in the Senate, and a record number of statehouses across the country — Republicans retook the party ID advantage.

Americans’ political allegiances shifted toward Republicans (w/ leaners) from the 43 – 39 percent deficit they faced prior to the elections, to a slight 42 – 41 percent edge over Democrats. While the poll represented a net shift of 5 percentage points in party allegiance in favor of the GOP, the post-Republican Revolution shift in 1994 was a far greater 16 points.

However, in the latest survey, Democrats have once again retaken a slight 4-point edge. Unfortunately, for them, the number of Americans identifying as Democrats is at a record-low — 30 percent — the lowest on record since Gallup began tracking the question in the 1980s. Solid Republicans are actually up 1-point — 26 percent — but near their own historic low in 1983, when President Ronald Reagan spanked Walter Mondale in a 49-state landslide election.

So, if the number of independents is at a new high and the number of Democrats at new low, then is this a watershed moment, one that presents disaffected Republican voters a historic chance to form a new party?

First, Republican voters in general are more likely to identify as straight up independents than Democrats, a trend we began to observe in the 1994 election. The trend is clearly still present now, which helps to explain why the Republican Party’s favorability ratings are higher than those of the Democratic Party, 42 percent and 36 percent, respectively.

They are “America-firsters,” meaning they are strongly pro-American business, despise NAFTA and other H.W. Bush-Clinton Era trade policies, and favor reducing imports to protect American jobs. They also oppose widespread intervention overseas, such as “nation-building” or being the “world’s police,” and support cutting back on America’s commitment overseas.

However, they also do not like weakness when America’s vital interests — and, sometimes pride — are challenged. Because they are “America-firsters,” they are strongly opposed to illegal immigration (more on this in a moment).

These voters are staunchly opposed to waste, fraud and corruption, leading them to favor term limits. They are extremely concerned with the size of the national debt and out-of-control spending, which is why they support a balanced-budget amendment to the U.S. Constitution. But they also hate corporate welfare and not only favor cuts to federal spending but also raising taxes on higher income Americans to achieve fiscal sustainability.

Widespread, but concentrated in regions from the Mid-West and Northern, predominantly white states, to central and Northern Appalachia.

These voters have always represented a large number of so-called independents, though they largely vote Republican. However, judging by demographics in the new Gallup poll, we can now add older-aged Democrats to their ranks, likely candidates for those who voted in 2014 for Thom Tillis in North Carolina, Joni Ernst in Iowa, Cory Garnder in Colorado, Scott Walker in Wisconsin, Rick Snyder in Michigan, and Rick Scott in Florida.

In 1994, on average, they broke in large numbers for Republican candidates — thanks to the courting efforts of Newt Gingrich — and told Gallup they identified with the GOP in their post-election survey. In 1996, they voted in smaller numbers for Bob Dole, but by a similar margin. In 2000, they broke heavily for George W. Bush by more than 2 to 1 over Al Gore, and so on.

In 2012, they stayed home and Mitt Romney lost. In 2014, they voted in decent numbers and Republicans won them back.

The record high number of independents reflects the result of a long-term trend with Republican-leaning voters, the addition of older Democratic voters who feel abandoned by the party, and disenfranchised conservatives. However, unlike the grim outlook for Democrats, the data point to a clear path forward for Republican voters seeking to reshape the Republican Party.

While a new party would do nothing but result in a three-way split of Reagan’s three-legged stool, a reshaping of the Republican Party akin to the far left-wing hijacking of the Democratic Party after 2004 would better serve their agenda. Building a larger tent is always better than destroying the small one that shelters you, but it will take anti-establishment forces.

Nearly two-thirds of Republican likely voters in a recent PPD Poll said they wanted a new speaker of the House, which is quite unsurprising. Due to differences on economic fairness, including corporate welfare tax breaks and immigration, the Republican establishment has struggled to keep these Republican-leaning, independent voters into the fold. If Republican leadership intends to quit fighting amnesty while handing out tax breaks to the big business members of the Chamber of Commerce, I’d expect to see a growing number of self-identifying independents in the future.

That being said, if you cannot affect change from the inside, you are unlikely to do so from the outside, particularly with inadequate numbers.