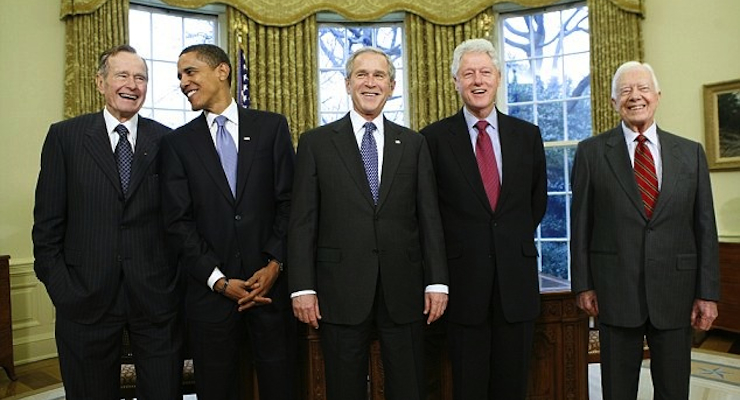 Democrats are flipping out over a new CNN/Opinion Research poll that found a majority of Americans now view George W. Bush favorably. By a 52 to 43 percent margin, Americans for the first time since the 43rd President left office (in the CNN Poll) have a favorable impression of him.

In fact, Americans now like W. more than the current — President Barack Obama — who is less like than, well, any of the living presidents.

There is little doubt that this represents a marked shift and is bitterly ironic considering much of Obama’s political success can be attributed to his successful scapegoating (fairly or not) of President Bush. But, from an analyst’s point of view, there is both reason for the Democrats to flip out and for Republicans to proceed with extreme caution.

First, historically speaking, Americans’ views have always grown more favorably toward U.S. president’s as their time from the Oval Office grows distant, including former President Richard Nixon. There are a few reasons for this, the first of which simply being that they are no longer in the day-to-day dirty game of politics.

In that respect, Democrats can take a bit of solace.

That being said, there is another component to this that they cannot take solace in, and actually became pretty clear long before the release of the CNN/Opinion Research poll. In 2013, Gallup tracking found Bush’s favorability ratings hovering just under a 50-percent majority during the April opening of his presidential library at Southern Methodist University in Dallas. However, not only was he above water (49 – 46 percent), but he was bouncing back faster than unpopular presidents historically have done in modern American politics.

Worth noting, the voters of Ohio began to wish they had Bush back as early as 2010, according to a survey conducted in the weeks leading up to the 2010 Tea Party landslide.

I wouldn’t attribute the marked shift to one factor per se, but rather it is more accurate to view Bush’s image among Americans through a “then and now” perspective. Because he left office with such abysmal approval and favorability ratings — only 50 percent of self-described conservatives holding a favorability opinion of him — we more often than not forget that he was once held in the highest regard, more so than any other president.

Before the house of cards fell down, Americans viewed Bush more favorably than unfavorably, including an astonishing and record 87 percent who held a favorable view of the commander-in-chief in a November 2001 survey. It the days and months after the 9/11 terrorist attacks, the nation rallied behind him. His favorability rating was just one percentage point below the all-time high Gallup has ever measured for any public figure, and shared by only Colin Powell in 2002 and the golf star Tiger Woods in 2000, before he was scrutinized in the public for indiscretions.

And then there is the now.

The polls unequivocally demonstrate that Americans do not feel safe under President Obama, have the highest level of anxiety regarding radical Islam than ever before, and simply do not trust the 44th President to calm their fears. This is an across-the-board problem for Obama, and it’s one that has benefited Bush among nearly every segment of the American people.

In the CNN Poll, which is less favorable to Bush than other surveys, the former president has gained 21 points among non-whites since leaving office; 22 percent among liberals; 15 percent among Democrats and 10 points among voters under 35 years old.

Lastly, the blame Bush mantra is no longer working for President Obama, who Americans overwhelmingly disapprove of on general matters of foreign policy. For the first time, when asked whose policies were more at fault for the current problems the U.S. faces in Iraq, slightly more blamed Obama than Bush.

Poll: Importance of Memorial Day Trends Higher, But Here's a Reminder for Minority

Poll: Bush Name Continues to Be a 'Net Negative' for Jeb, Despite G.W.'s Numbers