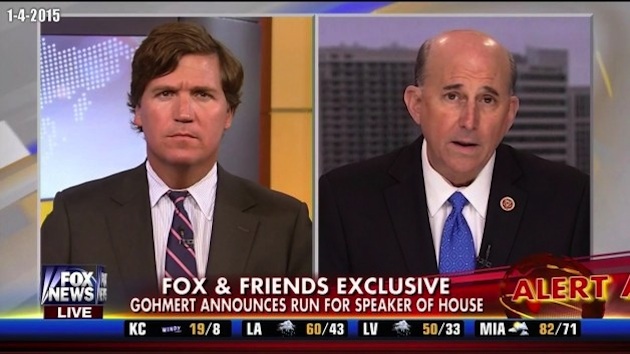 Rep. Louie Gohmert (R-TX) said Sunday that he will challenge House Speaker John Boehner for his post when Congress returns this week to Washington.

Gohmert, who was furious over a perceived betrayal by Boehner regarding the $1.1 trillion CRomnibus bill, made the announcement Sunday morning on “Fox and Friends,” saying he decided to run after Rep. Ted Yoho (R-FL), said Saturday that he would challenge Boehner, as well.

“We have heard from a lot of Republicans that said, ‘I would vote for somebody besides speaker Boehner.’ But nobody will put their name out there,” Gohmert said. “That changed yesterday with Ted Yoho.”

Gohmert also indicated that another House member will announce a challenge to Boehner on Sunday, but did not offer any specifics.

Boehner once again returns to Capitol Hill to find challenges to keep his gavel. Conservative members suggested they are open to another speaker after Boehner caved on a $1.1 trillion temporary federal spending bill, which averted another partial government shutdown but refused to challenge President Obama’s executive order on immigration.

“After the November elections gave Republicans control of the Senate, voters made clear they wanted change,” Gohmert also said Sunday. “There have been numerous examples of problematic Republican leadership, but we were hopeful our leaders got the voters’ message. However, after our speaker forced through the CR omnibus by passing it with Democratic votes and without time to read it, it seemed clear that we needed new leadership. There had been much discussion. But, until yesterday, no one had stepped up.”

Gohmert, during an appearance on Fox News’ “Hannity” on Friday, said his party must use its power in the House to defund President Obama’s immigration plan as well as ObamaCare. Hannity, as well, first called for Beohner’s replacement after the CRominbus bill was shoved through Congress without allowing votes on the conservative amendments to immigration.