On “Meet the Press,” Fiorina Flips the Script on Chuck Todd Over Planned Parenthood Videos 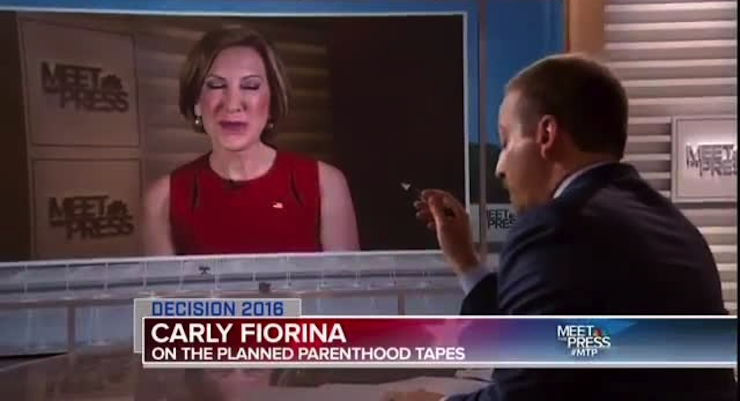 “Chuck, Do You Really Think This is Not Happening?”

On “Meet the Press” on Sunday, Carly Fiorina took on moderator Chuck Todd over her past statements regarding Planned Parenthood, but the former Hewlitt-Packard CEO and Republican presidential candidate repeatedly stood her ground.

Todd challenged Fiorina on her position and statements on abortion referencing the Washington Post editorial Sunday titled “Fiorina’s Falsehoods” calling her position an “exaggeration”. The article also referenced how Fiorina in the second debate described how PPFA doctors keep a living fetus alive in order to “harvest its brain,” which they claimed did not happen.

While PPD has extensively covered the undercover videos exposing Planned Parenthood’s illegal trafficking of baby body parts, including the latest and tenth video featuring a top executive expressing concern their activities would “destroy” PPFA, even PPD somewhat agreed with PoliFact on the issue.

However, from the past statements by PPFA heads across the country, which are in the undercover videos, there is no doubt the scene Fiorina described is occurring in PPFA clinics across America everyday. On this, Fiorina flipped the script on Todd and stood her ground, even pointing out that Todd “missed the opportunity” to ask Hillary Clinton (who is now for unfettered abortion on demand) about that reality.

“Chuck, Chuck, Chuck. Do you really think this is not happening?” Fiorina asked in return. “So sad you missed the opportunity to ask Mrs. Clinton why she said late-term abortions are only performed for medical purposes. That is patently false. This is happening.”

When asked if she would like to take her statements back, considering the video only superimposes stock images over other damning footage, the former HP CEO again stood her ground.

“Not at all. That scene absolutely does exist, and that voice saying what I said they were saying — “We’re gonna keep it alive to harvest its brain — exists as well,” Fiorina said.

Fiorina went on to rip the Washington Post, who did call into question her claims

“I don’t think the Washington Post has a lot of credibility here,” she said.

“Planned Parenthood cannot and will not deny this, because it is happening — and taxpayers are paying for it,” she said. Planned Parenthood is a “political slush fund, on top of being butchery that Americans cannot support.”