HomeVideoPaul vs. Rubio on Immigration: “Marco Has Opposed at Every Point Increased Border Security”

Paul vs. Rubio on Immigration: “Marco Has Opposed at Every Point Increased Border Security” 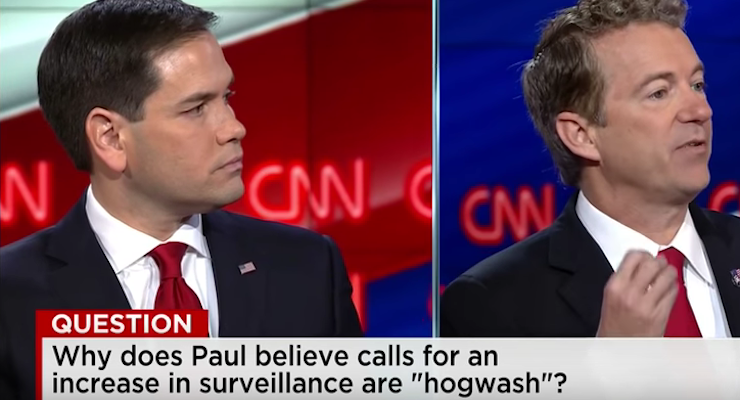 Sen. Rand Paul railed against Sen. Marco Rubio on immigration, border security and the bulk collection of metadata in the fifth debate in Las Vegas, Nevada.

“I think Marco gets it completely wrong,” Paul said regrading bulk metadata collection and government surveillance. “We are not any safer through the bulk collection of all Americans’ records. In fact, I think we’re less safe. We get so distracted by all the information, we’re not spending enough time getting specific information on terrorists.”

“The other thing is, the one thing that might have stopped San Bernardino that might have stopped 9/11, was stricter controls on those who came here,” Paul claimed. “And Marco has opposed at every point increased border security for those who come to our country. On his Gang of Eight bill, he would have liberalized immigration, but he did not and he steadfastly opposed any new border security requirements for refugees or students.”

“Last week, I introduced another bill saying we need more security. We need more scrutiny. Once again, Marco opposed this,” Paul said. “So, Marco can’t have it both ways. He thinks he wants to be this, ‘Oh, I’m great and strong on national defense.’ But he’s the weakest of all the candidates on immigration.”

“He is the one for an open border that is leaving us defenseless,” Paul added. “If we want to defend the country, we have to defend against those coming in and Marco has more of an allegiance to Chuck Schumer, to the liberals than he does to conservative policy.”

Krauthammer: Time for Bush to Criticize Trump at Debate Has Passed