HomeNewsElectionsHoward Dean: “I Am in for Chairman Again” at Democratic National Committee (DNC)

Howard Dean: “I Am in for Chairman Again” at Democratic National Committee (DNC) 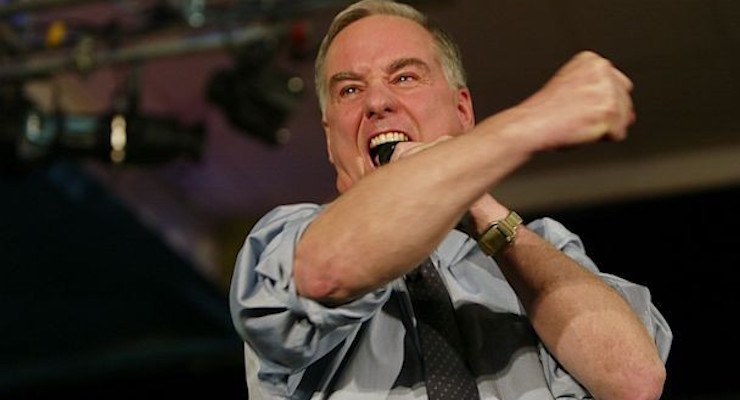 Former Vermont Gov. Howard Dean said he is running for his former job as head of the Democratic National Committee (DNC), much to the surprise of them. The announcement comes as Donald J. Trump defeated Hillary R. Clinton in an astonishing electoral vote landslide on Tuesday.

“The dems need organization and focus on the young,” Dean tweeted Thursday. “Need a fifty State strategy and tech rehab. I am in for chairman again.”

The dems need organization and focus on the young. Need a fifty State strategy and tech rehab. I am in for chairman again.

Dean, who previously served as DNC chair from 2005 to 2009, has been a liberal commentator and surrogate on MSNBC. He was recently forced to apologize after insinuating President-Elect Trump was snorting cocaine before the third presidential debate, which didn’t go very well for Mrs. Clinton.

Donna Brazile, the current interim chair, took over after Debbie Wasserman Schultz was ousted just before the Democratic National Convention in Philadelphia.

The anti-secrecy group WikiLeaks released nearly 20,000 hacked emails exposing a corrupt establishment in the party. They showed how the party, including Wasserman Schultz, worked for Mrs. Clinton and actively against Vermont Senator Bernie Sanders during the 2016 Democratic nomination contest.

But Brazile, who was also Bernie-bashing, came under fire after another earlier email indicated she gave the Clinton campaign a death penalty question before a CNN-hosted town hall event later that same month. That exchange began with Brazile sending Palmieri the text of the question with the subject line: “From time to time I get the questions in advance.”

With her on defense and national television refusing to admit she did what the emails clearly showed, another email was released from Brazile to Clinton Communications Director Jennifer Palmieri stating, “One of the questions directed to HRC tomorrow is from a woman with a rash.” It came the night before the March 6 primary debate in Flint, Michigan.

While Dean was the man behind a somewhat successful 50-state strategy, he throws his name into what is likely to become a crowded field. It’s unclear how much support an establishment figure like Dean even has with the base of the party. POLITICO reported earlier Thursday that Sen. Sanders is backing Rep. Keith Ellison, D-Minn., for the next chair. Rep. Ellison, the first Muslim to be elected to the U.S. Congress, was a top surrogate for Sen. Sanders during the primary. The liberal wing of the party is furious and distraught following Mrs. Clinton’s defeat.

The far left group MoveOn.org released a statement Thursday calling on the DNC needed to “clean house,” suggesting Rep. Ellison would be their preferred chairman.

Retiring Rep. Steve Israel, D-N.Y., and Rep. Xavier Becerra, D-Calif., have also been named as contenders. However, activists and members simply do not want to have another House member run the committee.