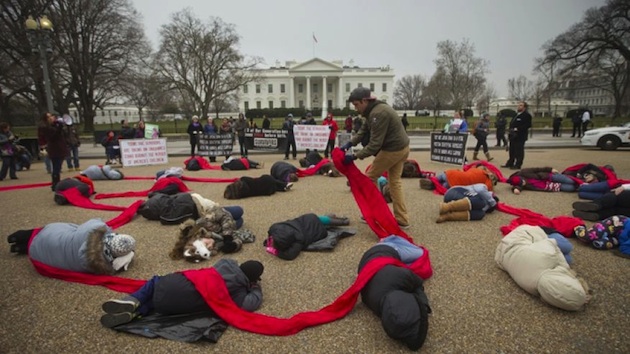 Jan. 21, 2015: Anti-abortion rights activists are connected with a red piece of cloth as they stage a ‘die-in’ in front of the White House in Washington. (Photo: AP)

House Republicans Wednesday folded on a bill that would have banned late-term abortions after 20 weeks amid party disagreements over alienating women voters. The failure of a bill once thought to be sure to pass comes just one day after Sen. Joni Ernst claimed the new Congress would “defend life, because protecting our most vulnerable is an important measure of any society.”

Rather than vote on this bill, the House will vote Thursday — which is the 42nd anniversary of the Roe v. Wade decision — on a bill that would ban the use of tax dollars for abortions. It is the same law that was passed by the House nearly one year ago but died in the Senate, which was then controlled by Harry Reid (D-NV) and the Democrats. It will make permanent the so-called Hyde amendment, which bans all federal money for abortion services.

As of now, Congress simply renews the amendment each year, which it has done since the mid-1970s. However, through ObamaCare funding Planned Parenthood and other abortion providers, the administration has been circumventing the law for years already.

The move is a clear act of symbolism over substance, as the vote Thursday will come on the same day that the anti-abortion March for Life is scheduled to begin in Washington.

The failed bill was a reflection of the scientific evidence presented in recent years that suggests that a fetus can feel pain at 20 weeks and offered certain exceptions, including for victims of rape that reported the crime to authorities.

Yet, some Republicans, including female members of Congress, said many women do not report rapes and, thus, should not be subject to such a law, citing a 2013 Justice Department report that claimed only 35 percent of rapes and sexual assaults were reported to police.

“The issue becomes, we’re questioning the woman’s word,” Rep. Renee Ellmers, R-N.C., said earlier Wednesday. “We have to be compassionate to women when they’re in a crisis situation.”

And that wasn’t the only sticking point.

“So the exception would apply to a 16-year-old but not a 19-year-old?” said Rep. Charles Dent, R-Pa, who objected to the bill’s exemption for minors who are victims of incest and have reported the incident. “I mean, incest is incest.”

While party leadership was concerned that the bill would have negative political consequences for a Republican Party that seeks to attract female voters in the 2016 elections, public opinion among women and all voters is overwhelmingly against late-term abortion.

“PPD has spent a great deal of time analyzing the support for abortion, and Americans have favored a late-term abortion ban for years,” said PPD’s senior political analyst Richard D. Baris. “And that includes a majority of young and women voters.”

A recent WaPo/ABC news poll found that by a 56 percent  – 27 percent margin, more Americans say they’d prefer to impose limits on abortions after the first 20 weeks of pregnancy rather than the 24-week mark established under current law in some states. Gallup, who has been tracking the issue since the 1970s, has found even greater support for late-term abortion.

“Since 1995, when Gallup measured a 23 percent advantage for the pro-choice designation, support for abortion has steadily ceded ground to the pro-life designation,” Baris said. “And the reason is simple. Most Americans, particularly younger Americans, find it harder to see a 20-week-old baby as a fetus.”

Even a July 2013 Huffington Post poll found that by a two-to-one margin, respondents said they would favor a federal law banning abortion after 20 weeks of pregnancy.

Nevertheless, party leadership contends they wants to show they can focus on issues that matter to voters without any gridlock. However, members who backed the 20-week bill say 1) leadership is scared of media treatment on the issue, not the voters and, 2) they didn’t raise their objections until the last-minute, claiming they used the issue to win their election and are now breaking their promises.

“This isn’t something new,” a congressional aide said. “We’ve been working on this for two years, since July 2013. Where were they?”

Another source told FOX News that it was known the abortion bill would be one of the new Congress’s first votes of the session, and that any members suggesting otherwise were “being dishonest.”

In a statement, Family Research Council President Tony Perkins said he was disappointed by the failure of the 20-week measure, but said he was encouraged that Congress would vote on banning taxpayer funding of abortions.

“Americans have been forced to violate their conscience and religious convictions long enough by being made to fund President Obama’s massive abortion scheme,” Perkins said.

Rep. Trent Franks, R-Ariz., a chief sponsor of the 20-week bill, called it “a sincere effort” to protect women and “their unborn, pain-capable child from the atrocity of late-term abortion.” Franks added that leadership members “want to try to create as much unity as we can.”

The White House had threatened to veto the legislation, calling it “an assault on a woman’s right to choose.”

In the 42 years since the Supreme Court’s ruling in Roe v. Wade, there have been 57 million unborn babies aborted in the United States.