HomeNewsPoliticsWhich Likely 2016 Republican Presidential Candidate Made Their Case In Iowa?

Which Likely 2016 Republican Presidential Candidate Made Their Case In Iowa? 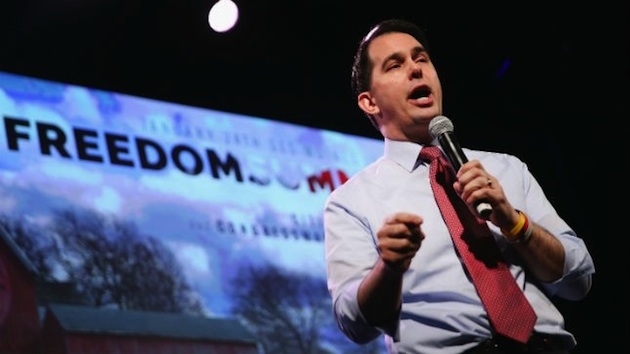 More than 1,000 religious conservatives met at the Iowa Freedom Forum Saturday to hear 10 hours of speeches from likely 2016 Republican candidates for president. So, which one made their case to the first in the nation primary caucus state voters, and the nation?

First, rather than get into highlights from the candidates’ speeches, PPD projects the clear winner to be Wisconsin Governor Scott Walker. For a variety of reasons, including delivering what a majority of activists we spoke with felt was a flawless speech, Walker’s performance excelled even our expectations.

That’s worth noting, because he was the potential 2016 president candidate PPD previously named the upcoming cycle’s dark house, for crying out loud.

“It was a clear Walker victory. He had expectations coming in here, he was on everyone’s shortlist and he had to meet those expectations and I thought he far exceeded them,” said former Iowa Republican Party political director Craig Robinson. “I thought his speech was just perfect, and I thought his delivery was perfect. The delivery really surprised me.”

Fair or not, because of his former role, Mr. Robinson is seen by some as a more establishment voice in the party, but Walker impressed even the most conservative advocates.

“That’s the first time I’ve ever heard him live and he was tremendous. It was a great speech,” said well-known Iowan conservative Sam Clovis, the party’s 2014 nominee for state treasurer. “That was something special.”

Clovis’ statement is one we frequently hear from Walker’s first-time observers. While mainstream media outlets, including FOX News, have a tendency to portray Walker as vanilla, you will hear a very different take from others who either have had the chance to speak with the governor in person, at a campaign event or have heard one of his speeches.

On the issue of specific policy prescriptions, not everyone was completely thrilled.

“He was very personable,” Iowa conservative radio host Steve Deace told The Hill. “When the questions were about his resume he was really good because he has a pretty good resume. When the questions got into a broader context about policies beyond his resume his answers were pretty canned, pretty typical formula talking points.”

Deace interviewed Walker on Saturday, and did say “he’ll have to provide a lot more substance on issues than when I got a chance to talk to him.”

But that’s not entirely what this forum was meant to do, but rather candidates are expected to sketch their vision for their own campaign and ultimately the country in the minds of caucus-goers, who can draw a reasonable conclusion on candidates like Gov. Walker, because both his electoral and governing track records in Wisconsin are both conservative and strong.

“You see, I think that sends a powerful message to Republicans in Washington and around the country that if you’re not afraid to go big and go bold you can actually get results,” Walker said during his speech, which included touting his social (late-term abortion restrictions) and fiscal (tax cuts from budget surplus) accomplishments, naming the threat from “radical Islamic terrorists” and his pro-Second Amendment record.

“He was quite impressive in terms of him talking about specifics about what he’s done in Wisconsin and the kind of leader he was,” said Scheffler. “People want somebody like him who has a track record and isn’t afraid to take on the powers that be, whether that be Scott Walker or whoever.”

Former Florida Gov. Jeb Bush and 2012 Republican nominee Mitt Romney were the two biggest losers coming out of the event Saturday. First of all, neither of the two, arguably most-recognizable potential candidates even bothered to show up. Second, they were absolutely skewered by billionaire TV personality and potential candidate Donald Trump, whose argument that the party needs to move forward, not look back to the past, was well-received by the crowd.

While a recent Gravis Marketing Poll found Romney (21 percent) and Bush (14 percent) ahead of Walker, who came in third at 10 percent, Trump spoke to the dominant sentiment in the activist base of today’s Republican Party, nationwide.

A recent PPD Poll found that a Bush candidacy would depress Republican voter turnout. A slim majority of Republican and Republican-leaning independents — 51 percent — said they are less likely to vote in 2016 if Jeb Bush is the nominee, and 48 percent of registered voters say they definitely will not vote for another Bush.

Similarly, a recent Rasmussen survey of a 1,000 likely Republican voters found just 33 percent believe Bush should run for president in 2016, while just as many (34 percent) disagree, and another 33 percent are not sure.

Ultimately, both Romney and Bush will have a difficult time connecting with Main Street American voters, a gift even Mr. Trump possesses more so than either of them. But, Gov. Walker and Gov. Walker alone Saturday showed that he can be the candidate with unquestionable conservative credentials, as well as the ability to broadly convey an appealing conservative message.

The GOP’s 2016 candidate must make the case they can appeal to not only traditional Republican voters, but that bloc of voters PPD has dubbed Obama-Walker voters (voters who backed Walker in 2010, the recall and 2014, but not Romney in 2012), a group whose demographic composition is not only found in Wisconsin, but throughout the battleground states.

“Walker found a way to talk about himself, talk about the country and talk about Iowa in perfect proportionality, and he did so with a style that was very easy and engaging,” said Republican pollster Frank Luntz. “He connected to these people — you could see it.”