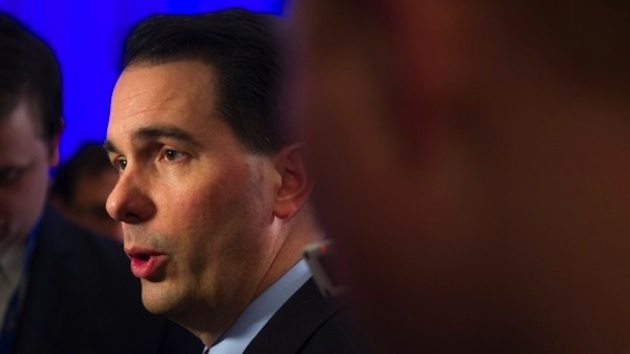 Left-wing media attention has turned to Wisconsin Gov. Scott Walker, a potential Republican candidate for president whose stock has risen in recent weeks. Following a headline-grabbing performance that prompted PPD to name the two-term governor the event’s biggest winner, the DMR Poll found Walker surged to the top in the first-in-the-nation caucus.

While PPD has named Walker the most likely 2016 dark horse, his rise to the stature of a serious top-tier candidate has been an alarming surprise to the liberal “mainstream” media. Now, they are predictably commencing with their systematic attack on the man who took on the progressive establishment in an otherwise progressive state — though shifting rightward — and won.

And they are doing so because they are terrified of Gov. Scott Walker.

First, they attempted to tie Walker to the Obama-Giuliani controversy over whether or not the president loves America.

In an interview with the Milwaukee Journal Sentinel Friday, Walker was asked if “America’s Mayor” Rudy Giuliani was out of line saying he doesn’t believe President Obama loves America the way other past Republican and Democratic presidents did, statements he has since reinforced with substantive argument.

“I’ve said repeatedly that (Giuliani) can speak for himself,” Walker said of the former NYC mayor’s comments at a fundraiser for the governor earlier this week. “The president can defend that.”

“Do you think the president loves America?” the paper pressed, to which the governor responded:

I assume most people in this country love America. And to me I don’t think it’s worth getting into the battle over whether he does or he doesn’t. He can handle that himself. I know I do. And I know there are great people in this country who love this country and who … feel this country’s exceptional and it doesn’t necessarily align by party. I think there are Republicans and Democrats and plenty of people in between. I’ve never asked the president so I don’t really know what his opinions are on that one way or another.

Walker — who is currently in Washington for a weekend meeting of governors — further gave a response to The Associated Press, who apparently has nothing better to report on.

“You should ask the president what he thinks about America,” Walker fired back at the AP reporter.

Now, in an even more ridiculous exchange during an interview with the Washington Post, Dan Balz and Robert Costa asked Gov. Walker whether he believes Obama is a Christian. Balz cleverly noted in his follow-up hit piece Sunday that Obama “recently talked about his Christian faith at the National Prayer Breakfast.”

So what? He also attended a church that regularly preaches “God-damn America.”

What is behind the left-wing media rush to tarnish Gov. Scott Walker? Fear. Though the GOP bench in 2016 will be the deepest in at least two cycles, many of the other Republican hopefuls are not battle-tested. Further, his surge in recent polling is both nationwide and in key traditionally blue states liberals are quietly worried they can no longer hold onto in the post-Obama era. Demographically speaking, the very voters that are endangering Democrats’ grips on these states are the very ones who handed Walker three electoral victories for governor in four years in a state that hasn’t voted Republican on the presidential level since 1984.

And, unlike Jeb Bush, Gov. Walker has a good deal of room left to rise.

“Quinnipiac University polls in Colorado, Iowa and Virginia found that Walker had ‘the lowest name recognition’ of any candidates tested,” Balz noted. That’s certainly less true Iowa now, but as a whole the governor must see his favorability ratings rise disproportionate to his unfavorable ratings. It is a crucial time for him and other little-known GOP hopefuls. As voters get to know him, it is more likely than not a majority will come to like him. Walker is a scary talented retail politician, and Democrats know that if they want to destroy him now, just as they successfully tarnished the last grave threat — New Jersey Gov. Chris Christie — they must do it now.

Thus, with the media doing their part and carrying the Democratic Party’s water, the race to define Gov. Scott Walker is underway.