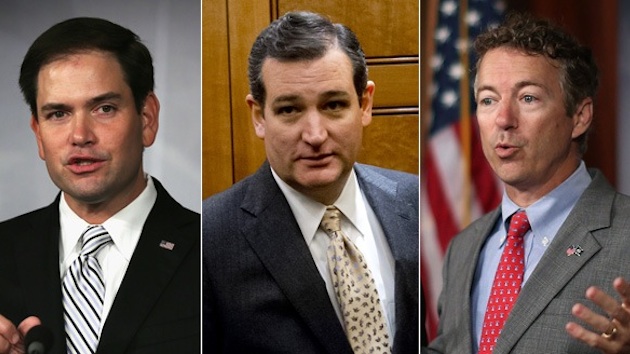 “These numbers are a boost for U.S. Sen. Rand Paul of Kentucky as he formally launches his campaign,” said Peter A. Brown, assistant director of the Quinnipiac University Poll. “Ominous for Hillary Clinton is the broad scope of the movement today compared to her showing in Quinnipiac University’s mid-February survey. It isn’t just one or two Republicans who are stepping up; it’s virtually the entire GOP field that is running better against her.”

Paul, who announced he is running for president earlier this week, leads Clinton in the key battleground states of Colorado and Iowa, 44 – 41 percent and 43 – 42 percent, respectively. As PPD previously examined, no other GOP candidate has consistently polled as well against Clinton since 2013, and the trend appears to be solid moving forward. Only Florida Sen. Marco Rubio and Wisconsin Gov. Scott Walker boast a small 1-point lead over Clinton in Colorado or any other purple state.

Rubio is expected to announce his candidacy Monday, and has already begun to compete with his fellow-Floridian, Gov. Jeb Bush for big city donor money. Rubio was the featured guest at Republican donor Paul Singer’s place in New York last Monday, which was attended by influential Republican foreign policy hawks. According to sources who attended the dinner, “people who walked out of the room were totally in love” with the Cuban-American senator, a sign the New York Jewish Republican donor class may serve as his personal trough.

Meanwhile, Sen Ted Cruz, the first to announced he was running for president in late March, has absolutely caught fire.

Cruz recently told Bloomberg that a group of affiliated super-political action committees, which were formed only this week, are expected to have $31 million in the bank by Friday. According to documents filed with the Federal Election Commission, the treasurer for the cluster of new super-PACS is Dathan Voelter, an attorney from Austin, Texas and longtime friend and financial backer of Cruz.

The three PACS, all with a variant of the name “Keep the Promise,” do not plan to reveal the names or number of donors until they are legally required at the end of the FEC reporting period on July 15.

Nevertheless, Clinton’s newfound drop in support coincides with several negative headlines as of late, including her foundation taking millions of dollars from foreign government and deleting emails kept on a private server sought by investigators on the House Select Committee on Benghazi. According to Brown, the fact she is polling significantly worse against all but New Jersey Gov. Chris Christie is telling.

“That’s why it is difficult to see Secretary Clinton’s slippage as anything other than a further toll on her image from the furor over her e-mail,” Brown said. “In all three of these states, more, and in Colorado many more, registered voters say she is not honest and trustworthy.”

Indeed, even in Virginia, the purple state in which Clinton currently performs the best, voters don’t trust here.

“Of the three states tested, Virginia seems to be the friendliest toward Hillary Clinton, perhaps a continuing reflection of the Old Dominion’s leftward drift over the past decade. Only yesterday, it seemed, it was deeply red,” Brown said.

Still, question 21 in the poll tells the story.

Even though Hillary Clinton is still leading, tied, or slightly trailing her potential GOP opponents, they are far less known than her and have far more room to grow. That is especially true of Sen. Paul, who currently enjoys the best favorable/unfavorable spread. Consequently, the other likely candidate with high name recognition, Gov. Jeb Bush, has the worst spread. Bush is underwater in every state polled by Quinnipiac.

The question of honest and trustworthiness of a candidate is a deal-breaker and, in the end, will mean far more than questions 28 to 31. However, they underscore the ramifications of voters simply not believing what a politician is telling them.

Gov. Scott Walker: Obama 'Shouldn't Have Audacity To Be Schooling Anyone On Foreign Policy'