HomeNewsPoliticsDr. Ben Carson Sets Presidential Announcement For May 4 In Detroit

Dr. Ben Carson Sets Presidential Announcement For May 4 In Detroit 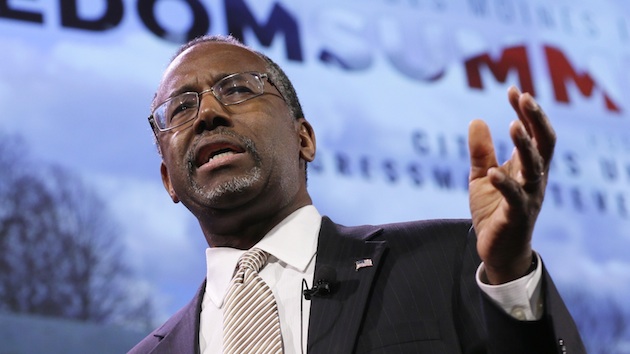 Dr. Ben Carson will make a presidential announcement on May 4 in Detroit, Michigan according campaign officials who allegedly spoke to CNN Monday. The announcement is set to take place at the Detroit Music Hall Center for the Performing Arts, but the campaign says they are hardly finished hammering out some pretty important details.

Aside from the decision that the event will be ticketed, the rest of the details, including how many tickets will be distributed to supporters or the substance of the actual announcement itself, spokeswoman Deana Bass says are all still up in the air.

“He will make an announcement,” she said. “But he’s still very much in the exploratory phase, so he hasn’t made a decision yet.”

Carson, a political newcomer who rose to prominence after giving a speech criticizing the ObamaCare in front of the president at the National Prayer Breakfast in 2013, would be the first African-American candidate to jump into the growing Republican field.

The 2016 presidential race on the Republican side kicked off with Texas Sen. Ted Cruz of Texas in late March, followed by Kentucky Sen. Rand Paul a few weeks later. Florida Sen. Marco Rubio announced his presidential candidacy at the Miami Freedom Tower Monday.

Meanwhile, Hillary Clinton became the first Democrat to announce her presidential campaign on Sunday via social media, and is now in Iowa attempting to convince voters she “wants to be that champion” this time around. The earlier-than-anticipated announcement comes after several polls show the email controversy hurt the former secretary of state, and now voters in key battleground states no longer view her as honest and trustworthy.

The retired neurosurgeon has been traveling the nation over the past six months, giving paid speeches and meeting with supporters to gauge interest in a bid. He recently traveled to Iowa and New Hampshire, and spoke last weekend at the National Rifle Association’s meeting in Tennessee, where he attempted to clear up past comments suggesting the Second Amendment does not apply to Americans who live in cities.

Carson’s nonexistent political inexperience has led to several gaffes already, however, he’ll look to turn it into an asset. He has repeatedly argued political newcomers such as himself are a common-sense solution to the problems created by life-long Washington politicians.

According to the PPD average of polls, Carson polls at a surprisingly strong 8.2 percent in nationwide Republican primary surveys. That’s just behind Paul (8.6 percent), Cruz (8.6 percent) and Rubio (6.2 percent). But PPD’s senior political analyst says the polls mean nothing at this point in the cycle.

“It’s way too early to draw any conclusions about firm support,” PPD’s Richard D. Baris says. “These numbers will go up and down. Some are even likely to stay sideways and go nowhere. Name recognition and news cycle headlines won’t win the nomination in the end.”