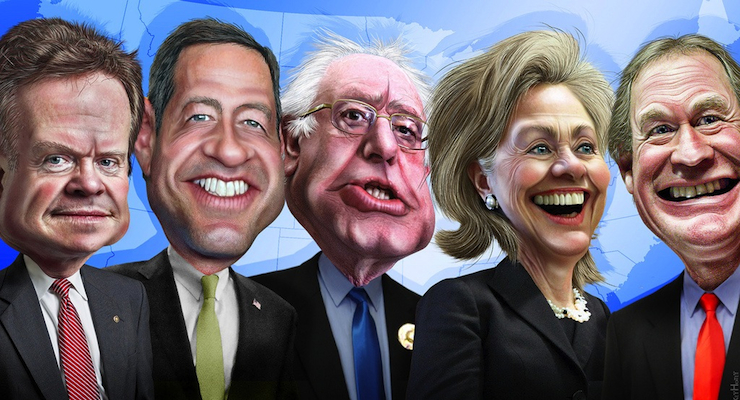 Despite having less than half the candidates as their rivals and far less media scrutiny, there’s no shortage of drama ahead of the first Democratic debate in Las Vegas, Nev., on Tuesday.

Hillary Clinton, former secretary of state and frontrunner, is under heavy pressure from donors and party superdelegates to outperform her primary opponents, particularly Vermont socialist Sen. Bernie Sanders, who has been cutting into her lead in the early voting state of Iowa and now leads in New Hampshire. While Sanders has said he will not bring up Benghazi, the email scandal or her recent flip-flops, former Maryland Gov. Martin O’Malley has made no such commitment and is starting the attacks early.

O’Malley hit Clinton over her latest flip flop on the Trans-Pacific Partnership (TPP), a 12-nation trade deal that she touted as secretary of state. O’Malley said he opposed the deal eight months ago and didn’t just come out against it “on the eve of a debate because polling told me to do it.”

Hillary released a statement last Wednesday stating she could no longer can support the deal she called the “gold standard in trade agreements” just as recent a 2012 speech in Australia. She even listed it in her book as one of her key accomplishments. However, under assault on her left flank, has backed away from supporting a number of her past positions, including the Keystone XL pipeline.

Clinton used the historic trip to America by Pope Francis to quietly announce her new-found opposition to the pipeline while speaking to a small group of supporters in Iowa. It marked a complete 180 on the former secretary of state’s position while she was serving out her tenure.

Vice President Joe Biden, who is likely to enter the race after the debate, has a podium on stage in Las Vegas just in case. Clinton’s camp over the weekend suggested he should just serve out his term while he is on top, and even indicated that he would have a cushy diplomatic position if he just so happened to decide against a run.

Worth noting, Mrs. Clinton is still the odds-on favorite on PPD’s Election Projection Model and will remain so unless another candidate can gain traction with minority voters. However, it is also worth noting that her fundraising advantage has narrowed significantly. Clinton has raised roughly $75 million this year, juxtaposed to Sanders’ $15 million. However, Sanders hauled in a whopping $26 million in the third-quarter alone, nearly matching Clinton’s $28 million.

Meanwhile, Rep.Tulsi Gabbard, D-Hawaii, a critic of Obama’s foreign policy and vice chairwoman of the Democratic National Committee, saying she was disinvited to Tuesday’s Democratic debate after calling for more of them. Tulsi told The New York Times on Sunday that DNC chairwoman Debbie Wasserman Schultz’s chief of staff rescinded the invitation just a day after Gabbard appeared on MSNBC calling for more than the currently scheduled six debates. A DNC spokesperson, of course, pushed back on that claim with their own version of events.

“The focus of the debate in Nevada as well as the other debates and forums in the coming weeks should be on the candidates who will take the stage, and their vision to move America forward,” said Holly Shulman, a spokeswoman for the DNC. “All that was asked of Ms. Gabbard’s staff was to prioritize our candidates and this important opportunity they have to introduce themselves to the American people.”

While Tulsi, a twice-deployed 33-year-old Army combat veteran and member of the House Armed Services Committee, was unavailable for comment Monday because she was participating in a ceremony promoting her to military police major with the Army National Guard, PPD has been told by two separate sources that her claim is absolutely true. O’Malley, too, has criticized the party for protecting Clinton with a light debate schedule.

Is "the Fix" in on Bowe Bergdahl Court Martial, Despite Dead Soldiers?

Trump on Adelson Backing Rubio: "Feels He Can Mold Him Into His Perfect Little Puppet"