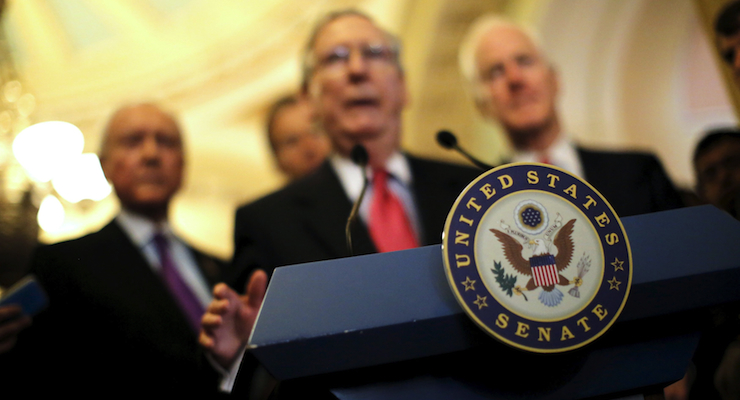 The sad, very sad, sudden death of the Supreme Court’s leading defender of the Constitution, Justice Antonin Scalia, has left a gaping hole that President Obama’s quickly vowed to fill – and that Senate Majority Leader Mitch McConnell has just as quickly vowed to protect.

Obama said, within hours of learning of Scalia’s death: “I plan to fulfill my constitutional responsibilities to nominate a successor in due time. There will be plenty of time for me to do so and for the Senate to fulfill its responsibility to give that person a fair hearing and a timely vote.”

McConnell responded: “The American people should have a voice in the selection of their next Supreme Court justice. Therefore, this vacancy should not be filled until we have a new president.”

And the smart, savvy political conservative ought to conclude: Obama’s going to nominate a far-lefty, McConnell’s going to put on a heck of a show of a fight – key word, show – and in the end, the White House will prevail. How do we know these truths to be self-evident?

Look at McConnell’s past.

In August 2013, then-Senate Minority Leader McConnell backed off a challenge to implement Obamacare, despite the fact a defunding effort from the likes of Sens. Ted Cruz and Mike Lee was gathering steam on Capitol Hill. The Senate Conservative Fund released a statement that read, in part: “Mitch McConnell is telling people he opposes Obamacare while he refuses to oppose its funding.”

In September 2013, Breitbart News, citing a source, reported McConnell and fellow senator, John Cornyn, were “whipping senators to shut down debate” on a House measure to defund Obamacare, “unbelievably … leading the fight to fully fund” the health reform.

In February 2015, McConnell announced support for a so-called “clean” Department of Homeland Security bill that capitulated to Democratic demands while stripping Republicans of their means of fighting Obama’s amnesty plans, leading one unhappy Republican senator to wryly comment: What “a total victory for the Obama position.”

In July 2015, McConnell sparked Senate and American outrage by allowing a vote on a highway bill that fully funded the highly contested Export-Import Bank, while blocking amendments to defund Planned Parenthood, at a time when the health clinic was under fire for videos that appeared to tie it to a gruesome baby body parts-selling scheme.

Another amendment he blocked at the same time? One called “Kate’s Law,” in memory of Kate Steinle, the woman who was fatally shot by an illegal immigrant with a prior felony record while she walked in broad daylight in San Francisco. The law would have imposed a five-year prison sentence on any illegal who was convicted of a violent crime after already being deported and was widely seen as a common sense measure.

Not to McConnell, apparently, who used a technique called “filling the tree” perfected by former Majority Leader Harry Reid to block the amendments from reaching the floor for vote.

“This strategy involves filling time allotted to amendments with insignificant procedural measures,” RestoreAmericanGlory.com reported. “It may not be particularly democratic, but it works.”

And who can forget McConnell’s absolute and ongoing contempt for the tea party?

In March 2014, was quoted as bragging how Republicans were “going to crush them everywhere” in upcoming elections. In December 2015, he cautioned voters against voting for primary candidates who couldn’t win in the general election, naming several tea party politicos who failed in their own recent bids.

Room doesn’t permit to run down all the budget deals and pacts McConnell’s made through the years that bend to Democratic will but toss Republicans beneath the bus.

Establishment at all costs – concession by any means. That’s McConnell’s driving political mantra. And he’s the one in charge of the Senate, which will soon be tasked to provide, in line with Article 2, Section 2 of the Constitution, “advice and consent” to Obama on Scalia’s replacement?

God help us. Without, Attorney General Loretta Lynch, or someone else talked about as Scalia’s replacement of similar leftist slant, will be confirmed to the court within the next couple months.