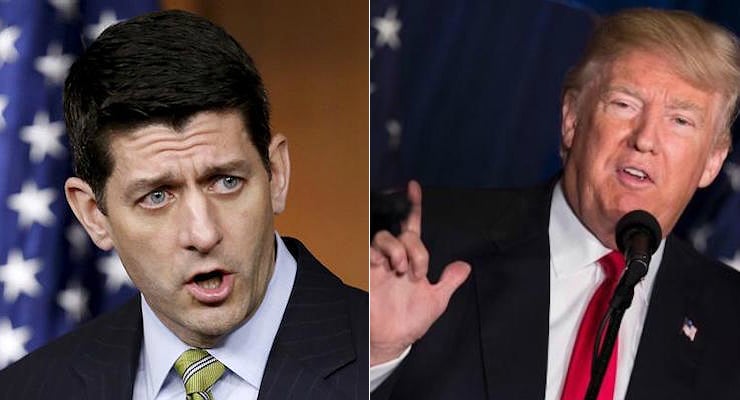 House Speaker Paul Ryan, R-Wis., said Thursday he’s “not ready” to support the presumptive Republican nominee Donald Trump, despite Hillary Clinton being his only alternative in November. While the media and Mr. Ryan’s allies have tried to portray this as an ideological conflict, research conducted by PPD may shed some light on why the Republican Speaker of the House isn’t yet on board the Trump Train.

Like a real locomotive, the Trump Train steamed over the 17-strong bench of 2016 presidential contenders, and he did so with on an “America First” platform that promised to renegotiate imbalanced trade deals. He vowed to work to reverse the harmful impact of the North American Free Trade Agreement (NAFTA), which has syphoned off U.S. manufacturing jobs, and finally get illegal immigration under control.

Of course, those promises would become broken promises if the U.S. adopted the massive 12-nation Trans-Pacific Partnership (TPP) trade deal, which was completed in early October.

“When it comes to trade, Paul is an ideological free trader,” said Rep. Duncan Hunter, R-Calif., an early and staunch supporter of Mr. Trump. “He’s up for any and all trade with any and all nations. These two men are diametrically opposed on trade.”

“The American people are behind Mr. Trump.”

Well, then it begs the question. Who’s behind Speaker Ryan?

Much of Main Street America is unaware of them, but former House Speaker John Boehner, R-Ohio, affectionately referred to his army of K Street lobbyists as citizens of “Boehner Land.” They secured hundreds of thousands of dollars for his campaigns, played at luxury golf resorts, and threw waterfront and warehouse parties. While it’s true that former Speaker Boehner was known even among his fellow Republicans for having particularly deep ties to corporate lobbyists, Mr. Ryan now enjoys support from many of the same interests.

Mr. Ryan’s benefactors are also members of the U.S. Coalition for TPP. According to the group’s website, the “U.S. Coalition for TPP is a broad-based and cross-sectoral group of U.S. companies and associations representing the principal sectors of the U.S. economy including agriculture, manufacturing, merchandising, processing, publishing, retailing, transportation and services.”

To be sure, not every member has given their full-throated support for TPP, but they are all part of the 487 groups that paid lobbyists some $2.6 billion while TPP was on their agenda, according to a report by OpenSecrets.org. Worth noting, that figure only includes the period from 2008 up until the third quarter 2015.

But notable Coalition members include groups that have supported harmful trade deals and unabated flows of low-wage workers in the past, such as the U.S. Chamber of Commerce, the National Association of Manufacturers and Boeing. These same entities were behind the fight to reauthorize the Export-Import Bank, which even the anti-Trump Club for Growth calls a “slush fund for corporate welfare.” That fight was lost until Republican leaders snuck it back in a late-night vote on a last minute spending bill.

Together with their allies, they form a long list that includes other Republican leaders, a coalition of Big Business Democrats (i.e. Trump’s fellow-New Yorker Sen. Charles “Chuck” Schumer) and a diverse range of business groups. All of these forces worked hard to pass trade promotion authority (TPA) this summer and need Speaker Ryan to help push it through the next Congress.

Akin Gump et al, a K Street firm representing corporate members of the U.S. Coalition for TPP–to include Pfizer (NYSE:PFE)–is number 8 on the list of the 25 top contributors to Speaker Ryan. Akin Gump, with other lobbyist firms such as BGR Group, weren’t even on the list prior to Mr. Ryan becoming speaker.

Former Mississippi Gov. Haley Barbour, another vocal critic of Mr. Trump (who won his state in a landslide during the primary), is now head lobbyist at BGR Group. He represents several U.S. Coalition for TPP members such as Chevron Corp. (NYSE:CVX), Caterpillar Inc. (NYSE:CAT), Toyota Motor Company ((NYSE:TM), as well as the the Building and Construction Trades Department at the AFL-CIO.

They shelled out $32,425 to his campaign committee and Leadership PAC in just the latest filing period. Pfizer, which is leaving the U.S., directly contributed a combined $57,150 during only the same period. In total, from 2015-2016, Pfizer contributed the second most on the top 25 list.

And that list, specifically narrowing those who have tirelessly lobbied for TPP, goes on and on. Candidate Donald Trump threatens to waste the more than $2.6 billion spent on TPP, but a “President Donald Trump” would mean a total waste of that money.