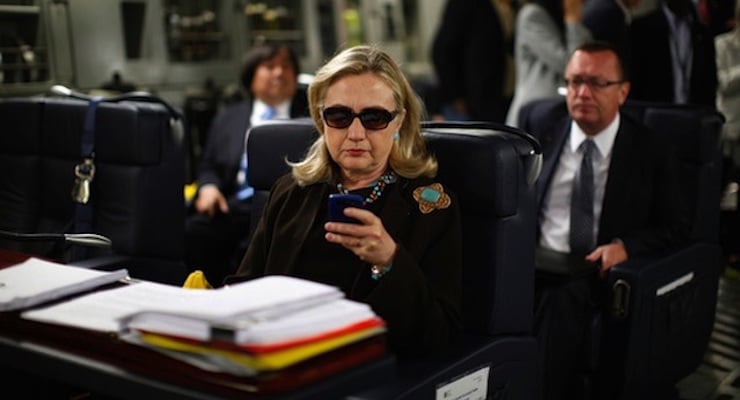 Then-Secretary of State Hillary Clinton works from a desk inside a C-17 military plane following her departure from Malta, in the Mediterranean Sea, bound for Tripoli, Libya, Oct.18, 2011. (Photo: Kevin Lamarque – Associated Press)

Newly obtained emails between former Secretary of State Hillary Clinton and IT specialist Bryan Pagliano contradict her sworn statement under oath. The emails, which were among those work-related and not handed in to the State Department by Mrs. Clinton, were recovered by the Federal Bureau of Investigation (FBI) and obtained as a result of a September 3, 2015 Freedom of Information Act (FOIA) lawsuit.

“These new emails leave little doubt that Hillary Clinton was less than forthright and misled the public when she wrote, under oath, that she ‘couldn’t recall’ communicating with Bryan Pagliano about her email scheme,” said Judicial Watch President Tom Fitton. “No wonder Clinton and her agents deleted these emails time and time again. And these smoking gun emails would never have seen the light of day but for Judicial Watch’s federal lawsuits.”

The lawsuit was filed by the government watchdog group Judicial Watch after the State Department failed to comply with an August 5, 2015 FOIA request seeking information about Mr. Pagliano’s involvement with Mrs. Clinton’s private email server. Mr. Pagliano pleaded the Fifth to Congress before the FBI gave him immunity for his cooperation. Last week, Secretary Clinton, now the Democratic nominee for president, claimed under oath to Judicial Watch that she “does not recall having communications” with Mr. Pagliano relating to the email system.

“Secretary Clinton states that she does not recall having communications with Bryan Pagliano concerning or relating to the management, preservation, deletion, or destruction of any e-mails in her clintonemail.com email account,” the former secretary’s sworn testimony reads.

Judicial Watch has also deposed Bryan Pagliano, and in June he again invoked his Fifth Amendment right not to incriminate himself. In fact, he did so more than 125 times, including:

Q. During your tenure at the State Department, did you communicate with Secretary Clinton by e-mail?

A. On the advice of counsel, I will decline to answer your question in reliance on my rights under the Fifth Amendment to the United States Constitution.

However, the emails to Mr. Pagliano, who installed and maintained the private “home brew” server in Mrs. Clinton’s New York home, were sent from Mrs. Clinton, herself. They relate to email management problems with Clinton’s BlackBerry, one of many that were smashed with hammers by aides ahead of the FBI investigation. The Bureau recovered these along with roughly 15,000 other emails that she failed to turn over to the State Department, despite her claims to the contrary.

These new emails are government documents and not personal emails as Mrs. Clinton had previously claimed.

To: Justin Cooper, Bryan Pagliano [Cooper was a senior advisor to Bill Clinton]

Once again, I’m having BB trouble. I am not receiving emails although people are getting ones I send but I get their replies on my IP. I’ve taken out the battery and done what I know to do but with no luck yet any ideas?

Thanks, Justin. How does that happen.  do I need to do anything?

Let me take a look at the server to see if it offers any insight. iPhone is not much different from iPad, however in both cases the security landscape is different from the blackberry.

Thanks again. I’m back in business.

While the content of the 2012 email is not consequential, it contradicts sworn testimony and serves as the latest instance of her tendency to be less-than truthful and respectful of the law. House Oversight and Government Reform Committee Chairman Jason Chaffetz, R-Utah, recently requested his office draft up a referral to the FBI to investigate Mrs. Clinton for perjury after she made several statements under oath to Congress that have been widely debunked as untrue.

Mrs. Clinton’s presidential campaign has yet to respond to a request for comment about this new email.