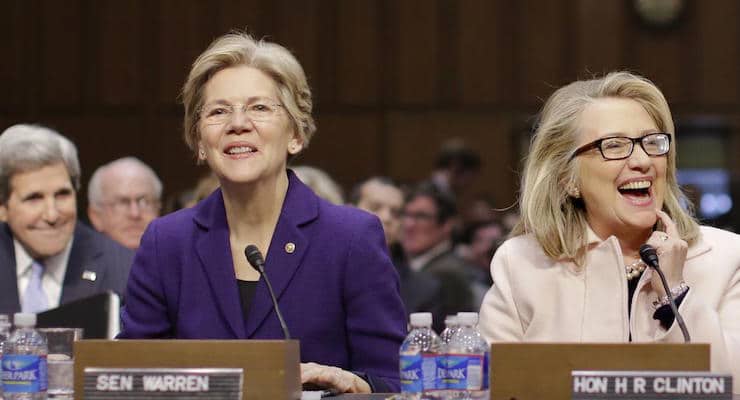 The Consumer Financial Protection Bureau (CFPB), the brainchild of Sen. Elizabeth Warren, D-Mass., could end up on the chopping block in the new Trump administration. Multiple sources have confirmed that the transition’s economic “Landing Team” discussed how the agency is oversized and how it will be unnecessary after President-elect Donald J. Trump repeals onerous, burdensome regulations imposed by Dodd-Frank.

The Consumer Financial Protection Bureau was first proposed by Sen. Elizabeth Warren in 2007, then a Harvard Law School professor. It was established by the Dodd–Frank Wall Street Reform and Consumer Protection Act in 2010 in response to the Great Recession.

However, most analysts agree nothing in Dodd-Frank would’ve prevented the 2007-2008 financial crisis and CFPB Director Richard Cordray said the Bureau’s priorities are mortgages, credit cards and student loans, the latter being dangerously close to becoming the forefront of the next potential financial crisis.

Further, while big banks are burdened by additional regulations, the community banks lacking the same resources have suffered greatly trying to achieve compliance.

Sen. Warren, who was initially the favorite to be the first director to head up the CFPB, was removed from consideration for nomination after the Obama administration came to the realization she “could not overcome strong Republican opposition.” She was a vocal critic of the New York businessman during the primary and general election, and she would frequently take to social media to go on Twitter tirades.

In response, he mocked her with the nickname “Pocahontas” before apologizing for insulting the great historical figure by comparing her to the leftwing senator. It was a dig at Sen. Warren’s now-debunked claim to be of Native American heritage, a status that earned her a place in Ivy League hallways.

The controversy over Sen. Warren’s heritage began when the Boston Herald challenged the claim during the 2012 campaign. The Herald’s report cited the Harvard Crimson in 1998, which lamented how she was the university’s only tenured minority as a “Native American.” In response to the report, Sen. Warren claimed she didn’t know why she would be listed as Native American.

She would later admit that it was “folklore” passed down in her family, specifically how “Aunt Bea” talked about her “pappaw”‘s “high cheekbones.” Hence, Mr. Trump, known for assigning political rivals insulting nicknames, came up with Pocahontas.

Nevertheless, liberals will undoubtedly argue the Bureau serves a purpose and, such is the nature of Big Government, would be just too difficult to rollback.

Would they have a point?

While the intention was for the CFPB to run as an independent agency–meaning unelected and unaccountable to duly-elected representatives in Congress or the White House–it became subject to the jurisdiction of the chief executive after the U.S. Court of Appeals for the District of Columbia found that the president’s power to remove the CFPB Director had been unconstitutionally limited.

The court ruling said the president’s ability to remove the director moves beyond cases of simple “inefficiency, neglect of duty or malfeasance.” The case is still technically pending, but the implication is that it is now no different than any other agency in the executive branch. If the president finds no reason for it to exist, it doesn’t.

“This authority follows logically from the principle that the executive branch may assess the constitutionality of a statute, and then act on its assessment without preexisting judicial imprimatur,” wrote Aditya Bamzai, an associate law professor at the University of Virginia Law School.

Bamzai, who argued in the past for the Obama administration, wrote about the topic in a posting on the Notice and Comment blog managed by the Yale Journal on Regulation and the American Bar Association’s section of administrative law and regulatory practice.

Others disagree, and it would appear we will soon find out who is right.

Trump to Nominate General James Mattis for Secretary of Defense