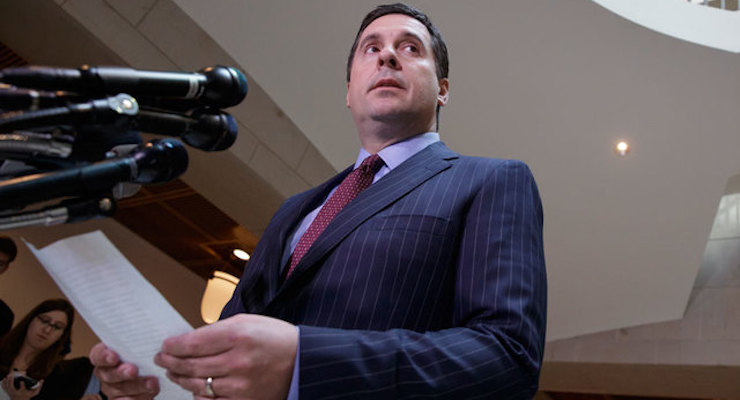 House Intelligence Committee Devin Nunes, R-Calif., has temporarily stepping aside from the Russia investigation. The announcement comes as reports reveal former National Security Advisor Susan Rice was behind the “unmasking” of U.S. persons in intelligence reports unrelated to Russian, indicating a political motive.

“Several leftwing activist groups have filed accusations against me with the Office of Congressional Ethics,” Chairman Nunes said in a statement. “The charges are entirely false and politically motivated, and are being leveled just as the American people are beginning to learn the truth about the improper unmasking of the identities of U.S. citizens and other abuses of power.”

Chairman Nunes dropped a bombshell when he announced sources had stepped forward with information confirming the Obama Administration spied on the Trump transition team. He said at a press conference he was “alarmed” by the “incidental collection” of intelligence unrelated to Russia and didn’t understand “why people would need to know that about President-elect Trump and his transition team.”

The announcement set off a political firestorm, to which Democrats responded by calling for Chairman Nunes to step down or recuse himself. The New York Times and Washington Post reported, falsely, his sources were members of the White House and a chorus of recusal voices grew.

However, it has since been revealed his sources are intelligence officials and the meeting took place in the White House because it is one of only a few facilities where raw classified data can be reviewed. The meeting could obviously have not been held in the agency of origin without the sources being identified.

“Despite the baselessness of the charges, I believe it is in the best interests of the House Intelligence Committee and the Congress for me to have Representative Mike Conaway, with assistance from Representatives Trey Gowdy and Tom Rooney, temporarily take charge of the Committee’s Russia investigation while the House Ethics Committee looks into this matter,” he said. “I will continue to fulfill all my other responsibilities as Committee Chairman, and I am requesting to speak to the Ethics Committee at the earliest possible opportunity in order to expedite the dismissal of these false claims.”

To be clear, anyone can file this type of complaint, which can be completed rather quickly and entails the mishandling of classified information. House Speaker Paul Ryan, R-Wis., supported the chairman and said he had “full confidence” in him. The decision was the chairman’s idea, according to statements.

“Devin Nunes has earned my trust over many years for his integrity and dedication to the critical work that the intelligence community does to keep America safe,” Speaker Ryan said in a statement. “He continues to have that trust, and I know he is eager to demonstrate to the Ethics Committee that he has followed all proper guidelines and laws.”

Rep. Mike Conaway, R-Texas, a senior member of the Committee, will now lead the investigation in the House. He will be assisted by Rep. Trey Gowdy, R-S.C., who led the Select Committee on Benghazi.

“I am confident that he will oversee a professional investigation into Russia’s actions and follow the facts wherever they lead,” Speaker Ryan added.