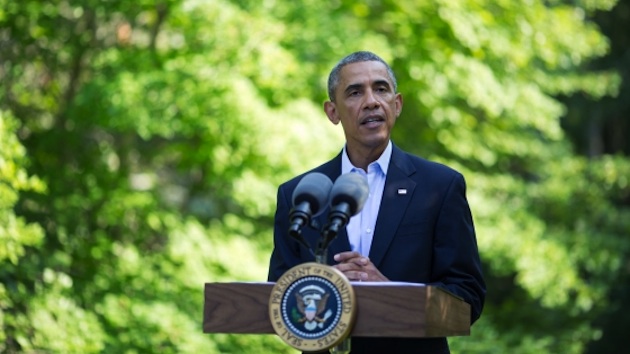 The Obama administration has decided to encourage Iraqi politicians to get behind Haider al-Abadi in an effort designed to form a multi-sectarian government and push out Prime Minister Nuri Kamal al-Maliki. Secretary of State John Kerry and Defense Secretary Chuck Hagel said on Tuesday said the U.S. would be open to expanding military and political support for Iraq if Haider al-Abadi becomes prime minister and leads the new government.

“We are prepared to consider additional political, military and security options as Iraq starts to build a new government,” Mr. Kerry said. Hagel also said the Obama administration “is prepared to intensify its security cooperation as Iraq undertakes and makes progress toward political reform.”

However, al-Maliki isn’t going easy, and has thus far resisted any effort to coalesce Iraq behind Mr. Abadi. On Monday, Kerry said that the U.S. would cut off its support for Iraq if al-Maliki turned to Iraqi security forces to help stay in power by force or threat of force. Still, it may be those closest to al-Maliki that pose him the greatest threat, as his pretorian guard is somewhat populated with soldiers loyal to his political enemies.

Since the withdrawal of U.S. military forces from Iraq, Prime Minister al-Maliki has refused to give the Sunni population more of a voice in the Iraqi government. His decision to isolate large blocs of the Iraqi population made some Sunnis sympathetic to the ISIS militants, though sentiment even among sympathizers is weakening due to the horrific tactics from ISIS. Nouri al-Maliki assumed power with the help of the Bush administration, who insisted on demanding inclusion from al-Maliki, but the Obama administration was already taking a hands-off approach to Iraq by the time al-Maliki sought his second term.

During this period, the Shiite prime minister sought to treat the Sunni politicians and population — among other religious minorities — with a contempt not tolerated under the Bush administration. Now, done is done, and the Obama administration has decided that a new prime minister is needed to establish a new, inclusive Iraqi government.

Though the president spoke Monday at the White House, which aides characterized as an update on the latest developments regarding military operations, U.S. strategy in Iraq is still very much unclear. Obama has committed the U.S. to a containment strategy. Yet, Pentagon officials worry that the U.S. cannot contain a force that has no state to retreat to, acknowledge no resolution can be favorable if the U.S. allows ISIS to remain operable in Iraq.

The White House says U.S. operations aim to prevent ISIS fighters from advancing on the Kurdish capitol of Erbil located in northern Iraq, as well as any advances toward Baghdad. Secondary humanitarian operations consist of providing minor protection to Yazidi religious minorities and Christians who are trapped on Mount Sinjar without food and shelter.

The Kurds, a pro-West religious minority who always been a friend to U.S. interests, have repeatedly requested the Obama administration send sufficient enough arms to halt the ISIS advance, including antitank weapons, armored vehicles and ammunition. Kurdish pesh merga fighters, by far, are the most well-trained fighters in the region and have the capability to stop the ISIS militants. However, seizing vast amounts of territory from the Iraq security forces, ISIS made off with scores of American weapons that put the Kurds at a disadvantage.

While we have confirmed that the Central Intelligence Agency is already supplying some arms to the Kurds, it unclear what kind of arms, how many, or who is actually providing them. On Monday, Lt. Gen. William C. Mayville, the director of operations for the Joint Chiefs of Staff, said that the Kurds needed these weapons if we want them to destroy some of our own vehicles that ISIS now has control over, as well as “longer-range weapons” to counter the U.S. weaponry also now in the hands of Islamic militants.

While appearing to offer the Iraqi people a carrot, neither Kerry nor Hagel gave any details or indication of what a greater role for the U.S. would look like in Iraq.