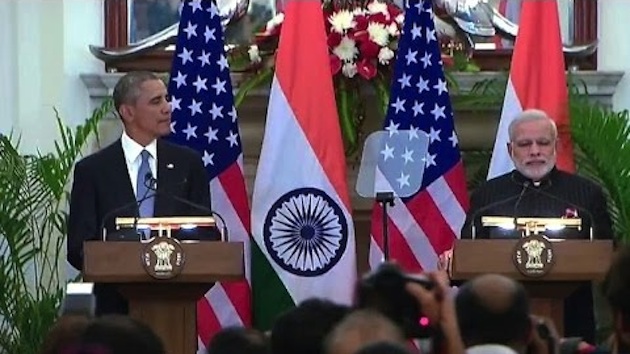 President Obama tries to explain during a press conference with India’s Prime Minister Narendra Modi, just how Yemen, the nation cited as the Obama doctrine’s model for fighting terrorism, collapsed.

The State Department announced late Tuesday that the U.S. Embassy in Yemen was closed and evacuated after the country was taken over by Shiite rebels last month. The U.S. embassy had already been operating with severely reduced staff for several weeks.

Only hours later, the United Kingdom followed suit and France took the same steps toward the same end. In a statement on its website, the French Embassy said it would close as of Friday. Further, both ordered their citizens to leave Yemen as soon as possible.

“The security situation in Yemen has continued to deteriorate over recent days,” U.K. Minister for the Middle East Tobias Ellwood said in a statement. “Regrettably we now judge that our embassy staff and premises are at increased risk.” Ellwood also urged all British citizens still in Yemen to “leave immediately.”

Earlier Tuesday, U.S. officials said the embassy closure would not affect ongoing operations against the terror group Al Qaeda in the Arabian Peninsula (AQAP). The group’s leader, Nasser bin Ali al-Ansi claimed, claimed responsibility for the Paris attack on Charlie Hebdo last month. In a video released shortly after, he said the organization chose the target, financed and planned the operation.

State Department spokesman Jen Psaki said remaining diplomatic personnel had been relocated “due to the ongoing political instability and the uncertain security situation.”

“The United States remains firmly committed to supporting all Yemenis who continue to work toward a peaceful, prosperous and unified Yemen,” Psaki said. “We will explore options for a return to Sanaa when the situation on the ground improves.”

Iran-backed, Shiite Houthi rebels, whose official slogan is “Death to Israel. Death to America,” seized control of the capital and forced the resignation of U.S. and Saudi-backed former President Abed Rabbo Mansour Hadi, and members of his government. Parliament was dismantled shortly after.

According to Long War Journal, there were 23 U.S. drone strikes reported in Yemen last year, 26 in 2013 and 41 in 2012. Still, Yemeni military officials said Tuesday the Houthis, with the help of troops allied with Hadi’s predecessor, former President Ali Abdullah Saleh, took full control of the key central province of Bayda province.

Their advance has seen popular opposition in the form of demonstrations in the streets. But, according to witnesses, Houthis attacked one demonstration, stabbing and beating protesters trying to reach the local United Nations office. They also arrested a number of demonstrators, taking them to undisclosed locations.

President Obama and administration officials have tried to explain how Yemen, the nation cited as the Obama doctrine’s model for fighting terrorism, collapsed. The answers have not satisfied critics, national security experts or even members of the intelligence community.

“Yemen has never been a perfect democracy or an island of stability,” President Obama said late last month during the fall of the capital of Sanaa. “What I’ve said is, is that our efforts to go after terrorist networks inside of Yemen without an occupying U.S. army, but rather by partnering and intelligence-sharing with that local government, is the approach that we’re going to need to take.”

While Marines providing the security at the embassy are also leaving, the administration contends American forces conducting counterterrorism missions against al Qaeda in the Arabian Peninsula will not be affected. But U.S. intelligence officials admit the developments have made conditions extremely difficult for them to continue anti-terror operations. An official speaking on the condition of anonymity cited Syria as an example of the U.S. losing intelligence as a result of losing their diplomatic foothold following the 2012 evacuation.