HomeOpinionHillary Clinton, Obama, Benghazi, Jihad and the Cover Up

Hillary Clinton, Obama, Benghazi, Jihad and the Cover Up 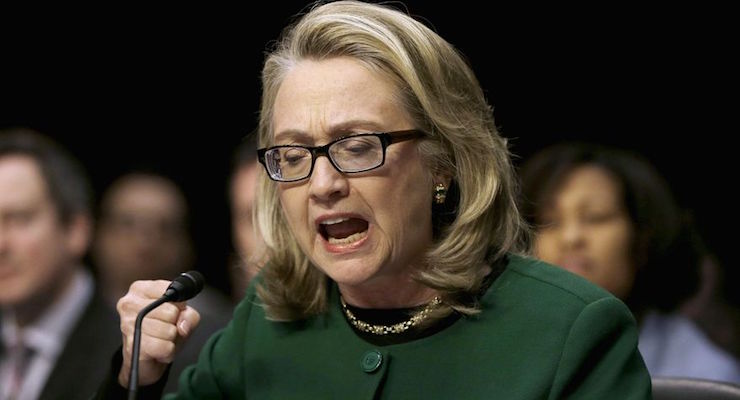 Secretary of State Hillary Rodham Clinton pounds her fist as she testifies on Capitol Hill in Washington, Wednesday, Jan. 23, 2013, before the Senate Foreign Relations Committee hearing on the deadly September attack on the U.S. diplomatic mission in Benghazi, Libya, that killed Ambassador J. Christopher Stevens and three other Americans. (Photo: AP/Associated Press)

It’s all becoming clear now. If you look back at the actions of the Obama administration, especially Hillary Clinton, and connect the dots, it starts to make sense. The question is, will it be too late to save the Republic?

In a very insightful article by General Mike Flynn titled “Why Hillary’s record on Libya is even worse than you think,” he lays out the case that Hillary, as Secretary of State, knowingly funded jihadis in Libya after meeting with Gulf kingdoms and tens of millions of dollars flowed into the Clinton Foundation. That is what the Benghazi cover-up was all about, to prevent this information from becoming known.

Hillary Clinton sold out the United States and armed those who wanted to kill us to do the bidding of Saudi kings. In the process, she allowed four great Americans to die rather than the truth be known. In her own words, “What difference does it make?” She is out for power and money, not the best interests of this country. She has proven that over and over. But it’s worse than that.

She engineered the overthrow of secular rulers in the Middle East in favor of religious fanatics like the Muslim Brotherhood; it was another phase of this agenda, all guided by her seditious advisor Huma Abedin. Now the administration is filling America with Muslim refugees. Hillary wants to ramp up those efforts exponentially.

What is happening is nothing short of an invasion of our country allowed by those who were supposed to be protecting us. The constant discoveries of illegal immigrants committing voter fraud is another facet of this agenda, promoted, aided, and abetted by the Obama administration. It is an infiltration of Wahhabism into the United States, again, funded by the Saudis.

There are many questions that go unanswered. Why hasn’t Obama seriously gone after the Islamic State? Why does he downplay Islamic terrorism at every turn? Why are the refugees admitted from the Middle East 99.5 % Muslim, when Christians have literally been subjected to genocide in Syria and surrounding areas? Why did Obama appease and give Iran everything it wanted? Why did Obama pull all our troops out of the Middle East and allow ISIS to form in the first place?

There is evil among us. It has shown itself.

A vote for Hillary Clinton is a vote to destroy the United States as we know it. It will be over. She will put the final nails in the coffin and jet off to her globalist masters in the end. A radical, socialist form of Islam will overrun the United States. Dinesh D’Souza didn’t know how prescient he was when he proclaimed a United States of Islam in the Middle East as Obama’s goal. What he didn’t realize is that it would be extended to the West as well.

It’s that simple. All I can say is if you value your children’s future, register and get out to vote, or just submit to your new masters.

Hillary No 'Enabler,' Nor Were Eleanor and Jackie

ISIS, Not Russia, is the Enemy in Syria