HomePolicyIn One Image, the Case for Ripping Up the Internal Revenue Code

I’m happy that many of the presidential candidates are proposing big tax cuts. Bobby Jindal and Donald Trump have large tax cuts, and Jeb Bush, Rand Paul, and Marco Rubio are proposing smaller – but still significant – reductions in the federal tax burden.

All of these plans, to be credible, should be accompanied by proposals for a sustained reduction in the burden of government spending (with real enforcement mechanisms). But there’s something else that needs to be part of the discussion. Yes, we need tax cuts and smaller government, but we also need radical tax simplification.

Consider this depressing chart showing the number of pages in the instruction manual for the IRS’s 1040 tax form. Or the number of sections in the tax law, which has skyrocketed in the past four decades. 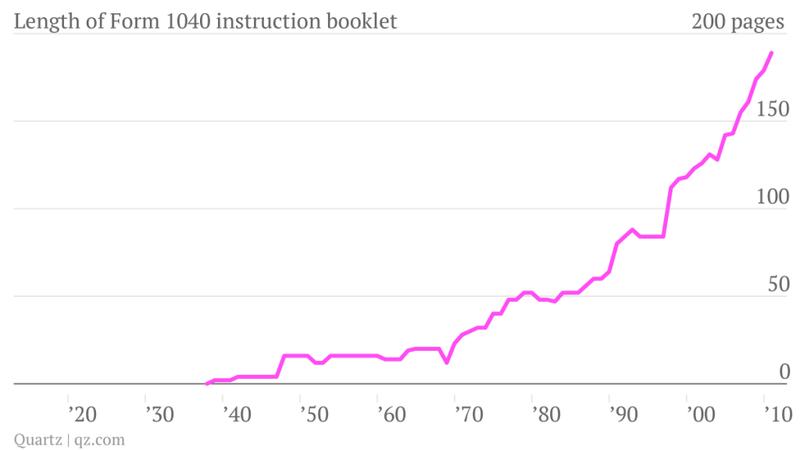 I think it’s fair to say that complexity is a proxy for corruption (and even the World Bank agrees with me). Our tax code is a Byzantine mess because interest groups and lobbyists conspire with politicians to swap loopholes for campaign cash.

Some say that this problem could be solved by restricting the First Amendmentand limiting people’s ability to participate in the political process. But that’s naive. So long as we have a convoluted tax code, insiders will figure out how to curry favor with the political elite and manipulate the system to their advantage.

Rather than trashing the Constitution, we should be trashing the internal revenue code. I have lots of economic arguments for fundamental tax reform and I can wax poetic about the harm of high tax rates and double taxation of saving and investment.

But this new chart from the Tax Foundation, showing the ever-growing number of words in the tax code, is probably the single most compelling argument for a simple and fair flat tax.

And I think all of us know that this relentless growth in complexity is not good for ordinary taxpayers.

The only winners are the cronyists, politicians, and other insiders who get rich by using the coercive power of government.

And don’t forget that a complicated tax code means a very powerful IRS, and we’ve seen how that leads to venal corruption.

Now let’s circle back to where we started. I mentioned that many presidential candidates have proposed big tax plans that reduce the amount of money flowing to Washington. Many of those plans also include partial reforms of the tax code.

All of these components are desirable in that they both reduce the tax burden and simplify the tax system. And I could list other attractive partial reforms that are in the various tax plans. But I can’t help but wonder why no candidate has explicitly embraced the gold standard of tax reform.

By the way, I’m ecumenical on a replacement system. There are other plans that satisfy the goals of real reform.

My only caveat, for those who advocate a national sales tax or value-added tax, is that we first need to repeal the 16th Amendment and replace it with something so ironclad that politicians could never do a bait and switch and saddle the American people with both an income tax and a consumption tax.