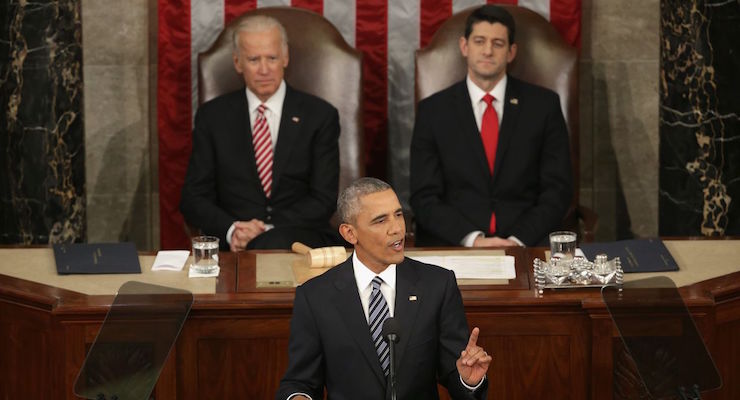 Let’s dig into the issue of whether the United States should become more like France. In a 2014 study for the National Bureau of Economic Research, Stanford University’s Robert Hall wrote about America’s sub-par economic performance. His opening line was basically a preemptive refutation of Obama’s claim–made during the State-of-the-Union Address–that the economy is strong.

The years since 2007 have been a macroeconomic disaster for the United States of a magnitude unprecedented since the Great Depression.

I don’t know that I would use “disaster” to describe the economy. That word would be much more appropriate for failed welfare states such as Italy andGreece.

But Professor Hall was definitely correct that the U.S. economy has been sputtering, as illustrated by comparative business-cycle data from the Minneapolis Federal Reserve.

So what accounts for America’s anemic economy? Hall has about 50 pages of analysis, but since brevity is a virtue, let’s look at some of what he wrote in his final paragraph.

Labor-force participation fell substantially after the crisis, contributing 2.5 percentage points to the shortfall in output. The decline showed no sign of reverting as of 2013. …an important part may be related to the large growth in beneficiaries of disability and food-stamp programs. Bulges in their enrollments appear to be highly persistent. Both programs place high taxes on earnings and so discourage labor-force participation among beneficiaries. The bulge in program dependence…may impede output and employment growth for some years into the future.

In other words, he pointed out that a large number of people have left the labor force, which obviously isn’t good since our economy’s ability to generate output (and boost living standards)

is a function of the degree to which labor and capital are being productively utilized.

And his work suggests that redistribution programs are a big reason for this drop in labor-force participation.

Now let’s look at another study from NBER, this one from 2015 that was authored by economists from the University of Pennsylvania, University of Oslo, and Stockholm University.

They examine the specific impact of unemployment insurance.

We measure the effect of unemployment benefit duration on employment. …Federal benefit extensions that ranged from 0 to 47 weeks across U.S. states at the beginning of December 2013 were abruptly cut to zero. …we use the fact that this policy change was exogenous to cross-sectional differences across U.S. states and we exploit a policy discontinuity at state borders. We find that a 1% drop in benefit duration leads to a statistically significant increase of employment by 0.0161 log points. In levels, 1.8 million additional jobs were created in 2014 due to the benefit cut. Almost 1 million of these jobs were filled by workers from out of the labor force who would not have participated in the labor market had benefit extensions been reauthorized.

To be sure, I’ll be the first to admit that empirical work is imprecise. Ask five economists for an estimate and you’ll get nine answers, as the old joke goes. Professor Hall, for instance, found a smaller impact of unemployment insurance on joblessness in his study.

But even if the actual number of people cajoled back into employment is only 500,000 rather than 1 million, that would still be profound.

Though at some point we have to ask whether it really matters whether people are being lured out of the labor force by food stamps, disability payments, unemployment insurance, ObamaCare, or any of the many other redistribution programs in Washington.

What does matter is that we have a malignant welfare state that is eroding the social capital of the country. The entire apparatus should be dismantled and turned over to the states.

But not everyone agrees. You probably won’t be surprised to learn that the White House is impervious to data and evidence. Indeed, notwithstanding the evidence that the left was wildly wrong about the impact of ending extended unemployment benefits, the White House is proposing to expand the program.

Here’s some of what’s being reported by The Hill.

The president’s three-pronged plan includes wage insurance of up to $10,000 over two years, expanded unemployment insurance coverage… The plan comes on the heels of Obama’s final State of the Union address on Tuesday, in which he committed to fighting for expanded out-of-work benefits during his last year in office. …The plan would also extend benefits to part-time, low-income and intermittent workers who can’t already take advantage of the out-of-work programs. And it would mandate states provide at least 26 weeks of coverage for those looking for work.

The part about mandating that all states provide extended coverage is particularly galling. It’s almost as if he wants to make sure that no states are allowed to adopt good policy since that would show why the President’s overall approach is wrong.

I joked in 2012 about a potential Obama campaign slogan, and I suggested an official motto for Washington back in 2014. Perhaps we should augment those examples of satire with a version of the Gospel according to Obama: Always wrong, never in doubt.