The Congressional Budget Office has just released its new 10-year fiscal forecast and the numbers are getting worse. Most people are focusing on the fact that the deficit is rising rather than falling and that annual government borrowing will again climb above $1 trillion by 2022.

This isn’t good news, of course, but it’s a mistake to focus on the symptom of red ink rather than the underlying disease of excessive spending.

So here’s the really bad news in the report.

In other words, the progress that was achieved between 2010 and 2014 is evaporating and America is on the path to becoming a Greek-style welfare state.

There are two obvious reasons for this dismal trend.

Here’s a chart that shows what’s been happening. It shows the rolling average of annual changes in revenue and spending. With responsible fiscal policy, the red line (spending) will be close to 0% and have no upward trend.

Unfortunately, federal outlays have been moving in the wrong direction since 2014 and government spending is now growing twice as fast as inflation. 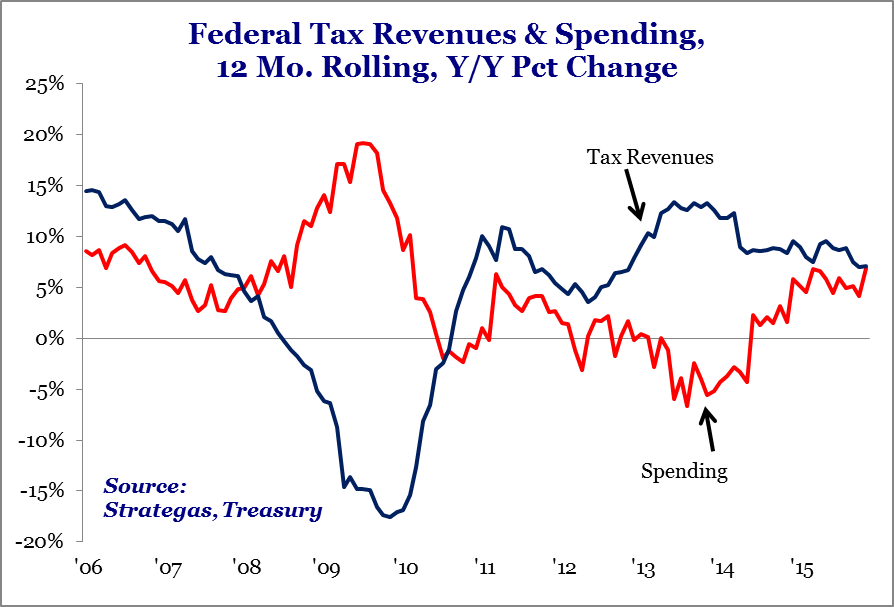 By the way, don’t forget that we’re at the very start of the looming tsunami of retiring baby boomers, so this should be the time when spending restraint is relatively easy.

Yet if you’ll allow me to mix metaphors, bipartisan profligacy is digging a deeper hole as we get closer to an entitlement cliff.

Here’s a chart that shows projected revenues (blue line) and various measures of how quickly the budget can be balanced with a modest bit of spending restraint.

That being said, when you impose some restraint on the spending side of the fiscal ledger, you automatically solve the symptom of deficits.

With a spending freeze, the budget is balanced in 2020. If spending is allowed to climb 1 percent annually, the deficit disappears in 2022. And if outlays climb 2 percent annually (about the rate of inflation), the budget is balanced in 2024. And if you want to give the politicians a 10-year window, you get to balance by 2026 if spending is “only” allowed to grow 2.5 percent per year.

In other words, the solution is a spending cap.

Here’s my video on spending restraint and fiscal balance from 2010. The numbers obviously have changed, but the message is still the same because good policy never goes out of style.

Needless to say, a simple solution isn’t the same as an easy solution. The various interest groups in Washington will team up with bureaucrats, politicians, and lobbyists to resist spending restraint.

P.S. A final snow update. Since my neighbors were kind enough to help me finish my driveway yesterday, I was inspired to “pay it forward” by helping to clear an older couple’s driveway this morning (not that I was much help since another neighbor brought a tractor with a plow).

It’s amazing that these good things happen without some government authority directing things!

Great News, the Income Tax Is Being Abolished! (Read the Fine Print)