HomePolicyMore Arguments Against the Value-Added Tax

More Arguments Against the Value-Added Tax

The left is very clever about accepting “compromise,” so long as the result is a larger burden of government.

This is one of the reasons why I’m so concerned about Senator Cruz’s proposal for a value-added tax. Even though he wants a VAT for good reasons (to finance lower tax rates and also to reduce the tax bias against saving and investment),my fear is that the statists will say yes, then quickly use the VAT to finance a big expansion of the welfare state. 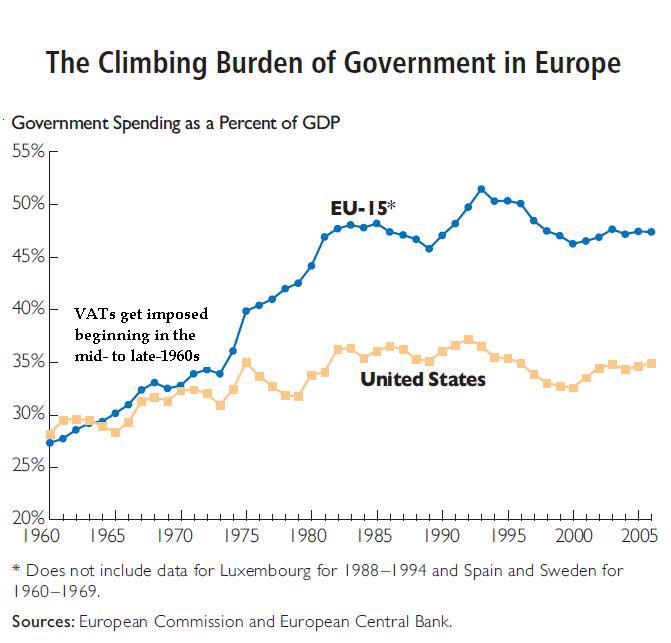 Which is exactly what happened in Europe.

Some folks think I’m being paranoid, to which there are two responses. First, there’s the old joke that even paranoid people have enemies.

But the second and more serious response is to point out that lots of statists openly say they want a VAT to make government bigger.

Indeed, some of these folks already are semi-embracing Cruz’s VAT because of their desire to have a new source of revenue for Washington. Consider, for instance, these excerpts from an editorial in USA Today.

The VAT is a kind of national sales tax used by virtually every other nation in the world because it can raise lots of money …partly because deficits are set to explode again as Baby Boomers retire, the VAT is back. Texas Republican Ted Cruz, winner of the Iowa GOP caucuses, is proposing a VAT… The concept has a lot going for it. …Cruz’s plan is flawed, but he’s on to something. A more progressive, phased-in VAT deserves to be part of any future conversation

You don’t have to read between the lines to understand that the editors at USA Today want a VAT to expand the public sector. The editorial even favorably cites Senator Cardin and former Treasury official Michael Graetz.

Do they want a VAT for the same reasons as Senator Cruz?

Not exactly. Senator Cardin acknowledges that the VAT could lead to a spigot of new tax revenue (“enacting a consumption tax could mean enacting a new and easy-to-adjust lever to raise taxes irresponsibly”), but he claims to have a mechanism that supposedly will guard against ever-higher tax burdens.

The Progressive Consumption Tax Act addresses this concern with a circuit breaker that returns overages from the PCT to taxpayers when revenues exceed predetermined levels.

This is a joke. The politicians in Washington get to set the “predetermined levels,” so it goes without saying that those levels will go from predetermined to redetermined in a blink of an eye, just as we’ve seen in other nations.

And what about Michael Graetz’s plan? Well, here are a few excerpts from an article he wrote.

…tax increases will be necessary to…address the nation’s unsustainable fiscal condition fairly… With this plan in place, our ability to raise additional revenue would be increased…

To be fair, Graetz is not a leftist. He basically wants a VAT because it’s a less-destructive way of financing bigger government.

I agree. It’s highly likely that a $100 billion VAT hike would do less damage than a $100 billion increase in income taxes, but why on earth would anyone want higher taxes to fund bigger government, particularly when we know sensible entitlement reforms could fix the nation’s long-run fiscal problem?

No wonder Avik Roy, writing for Forbes, is so worried about a VAT.

Sen. Ted Cruz…favors replacing the corporate income tax with what Cruz calls a “business flat tax,” and what Canadians and Europeans call a “value-added tax.” But the real debate isn’t about terminology; it’s about whether or not Cruz’s approach would drive an explosion of government taxes—and spending—over the mid- to long-term.

One reason it’s a money machine is that it’s actually a hidden tax on wages and salaries.

…businesses would no longer be able to deduct the cost of labor. As my colleague Ryan Ellis has detailed, that amounts to a “16 percent wage tax withheld at the employer level under the Cruz plan.”

And that creates a very large tax base, so any increase in the tax rate transfers a lot of money from the private sector to Washington.

…the most important problem with the Cruz plan is how Democrats would take advantage of it. Cruz envisions a VAT tax rate of 16 percent. But his plan would hand progressives a simple tool to raise taxes to far higher rates in the future. …the vast majority of federal revenue will hit voters indirectly, because it will come from businesses. From a political standpoint, Cruz’s plan would pave the way to higher tax rates in the future. …every one percent increase in the VAT would yield $1.6 trillion in new revenue over a decade. The temptation for a Democratic president and Congress to raise VAT rates to higher levels will be enormous.

And Avik echoes one of my concerns, warning that a VAT will greatly undermine and perhaps even kill any opportunity for genuine entitlement reform.

Under Cruz’s tax system, there would be absolutely no pressure on Washington to reform Medicare and Medicaid. Why reform entitlements when you can simply increase the “business flat tax” rate from 16 percent to 17 percent to 18 percent to 19 percent? This is exactly what has happened in Canada and Europe, where VAT rates started out low, and have gone up and up over time.

I should point out (as he does in his column) that Avik supports Marco Rubio, so he has a political motive to trash the VAT.

Indeed, he even makes some anti-VAT arguments that strike me as unfair, so I’ve omitted them from this analysis.

But the parts I have shared are completely accurate and they are more than adequate to make a very powerful case against giving Washington a new source of revenue.

Let’s close with some wisdom from the 1980s. I wrote that one of America’s worst presidents wanted a VAT to expand the welfare state. And I also mentioned that one of the best presidents in American history was on the right side of the issue. And it’s worth listening to the Gipper’s wisdom on this issue.

P.S. Here’s a short update to my recent post about the craziness of Keynesian economics. You may recall that the economic illiterates at the International Monetary Fund said diverting money from the private sector to finance government outlays on refugees would be good for growth.

Well, we now have estimates of how much will be spent on this so-called stimulus.

Shelter, medical care and integration policies for refugees will cost the German state €22 billion in 2016, and €27.6 billion in 2017.

Gee, according to the perpetual motion machine of Keynesianism, maybe the German government should put the entire population on welfare and the economy will really boom.

On Campaign Finance, Bernie and Hillary Put the Cart Before the Horse

Educating Congress and Debunking the White House on the Debt Limit