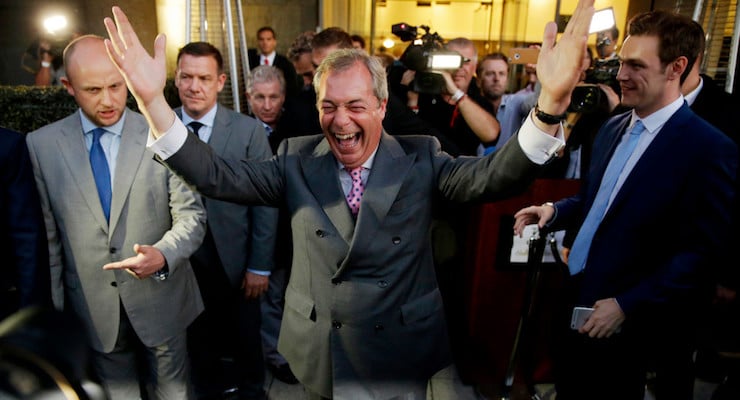 Nigel Farage, the leader of the UK Independence Party celebrates and poses for photographers as he leaves a “Leave.EU” organization party for the British European Union membership referendum in London, Friday, June 24, 2016. (Photo: AP)

What an amazing vote. The people of the United Kingdom defied the supposed experts, rejected a fear-based campaign by advocates of the status quo, and declared their independence from the European Union.

Here are some takeaway thoughts on this startling development.

1. The UK has voted to leave a sinking ship. Because of unfavorable demographics and a dirigiste economic model, the European Union has a very grim future.

2. Brexit is a vote against centralization, bureaucratization, and harmonization. It also is a victory for more growth, though the amount of additional long-run growth will depend on whether the UK government seizes the opportunity for lower taxes, less red tape, and a smaller burden of government.

3. President Obama once again fired blanks. Whether it was his failed attempt early in his presidency to get the Olympic Games in Chicago or his feckless attempt in his final year to get Britons to remain in the EU, Obama has a remarkably dismal track record. Maybe I can get him to endorse the Boston Red Sox, thus ensuring the Yankees make it to the World Series?

4. . Potential mea culpa…I can’t find proof that Trudeau actually made this statement. Even with the excuse that I wrote this column at 3:00 AM, I should have known better than to believe something I saw on Twitter (though I still think he’s vapid).

5. Nigel Farage and UKIP have voted themselves out of a job. A common joke in Washington is that government bureaucracies never solve problems for which they were created because that would eliminate their excuse for existing. After all, what would “poverty pimps” do if there weren’t poor people trapped in government dependency? Well, Brexit almost surely means doom for Farage and UKIP, yet they put country above personal interest. Congratulations to them, though I’ll miss Farage’s acerbic speeches.

6. The IMF and OECD disgracefully took part in “Project Fear” by concocting hysterical predictions of economic damage if the U.K. decided to get off the sinking ship of the European Union. To the extent there is some short-term economic instability over the next few days or weeks, those reckless international bureaucracies deserve much of the blame.

7. As part of his failed effort to influence the referendum, President Obama rejected the notion of quickly inking a free-trade agreement with the UK.

Now that Brexit has been approved, hopefully the President will have the maturity and judgement to change his mind. Not only should the UK be first in line, but this should be the opportunity to launch the Global Free Trade Association that my former Heritage Foundation colleagues promoted last decade. Unfettered trade among jurisdictions with relatively high levels of economic freedom, such as the US, UK, Australia, Switzerland, New Zealand, Chile, etc, would be a great way of quickly capturing some of the benefits made possible by Brexit.

8. David Cameron should copy California Governor Jerry Brown. Not for anything recent, but for what he did in 1978 when voters approved an anti-tax referendum known as Proposition 13. Brown naturally opposed the referendum, but he completely reversed himself after the referendum was approved. By embracing the initiative, even if only belatedly, he helped his state and himself. That would be the smart approach for Cameron, though there’s a distinct danger that he could do great harm to himself, his party, and his country by trying to negotiate a deal to somehow keep the UK in the EU.

9. Last but not least, I’m very happy to be wrong about the outcome. I originally expected that “Project Fear” would be successful and that Britons would choose the devil they know over the one they don’t know. Well, I’m delighted that Elizabeth Hurley and I helped convince Britons to vote the right way. We obviously make a good team.

Joking aside, the real credit belongs to all UK freedom fighters, even the disaffected Labour Party voters who voted the right way for wrong reasons.

I’m particularly proud of the good work of my friends Allister Heath of theTelegraph, Eamonn Butler of the Adam Smith Institute, Dan Hannan of the European Parliament, and Matthew Elliott of Vote Leave. I imagine Margaret Thatcher is smiling down on them today.

Now it’s on to the second stage of this campaign and convincing California to declare independence from the United States!

A very happy Nigel Farage (front), the leader of the United Kingdom Independence Party (UKIP) celebrates with supporters after the Brexit victory being the result of the EU referendum, outside the Houses of Parliament in London, Britain June 24, 2016. (Photo: REUTERS/Toby Melville)

Japan and the IMF: A Match Made in Keynesian Hell