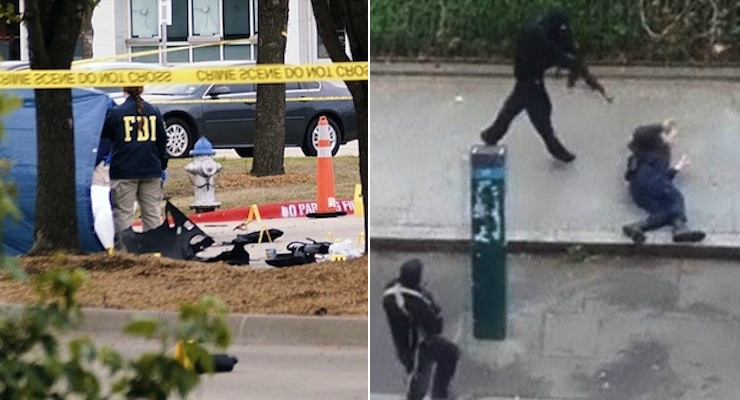 An FBI agent, left, looks at debris of a car blown up by police as a precaution, near the Curtis Culwell Center, on Monday morning. An image from video posted online shows masked gunmen just before one of them appears to shoot a Paris police officer at close range, following an attack on the office of weekly newspaper Charlie Hebdo, Jan. 7, 2015, in Paris, France.

There are no simple answers to Islamist terrorism, particularly when individual nut-jobs are determined to kill a  bunch of innocent people.

But I know that some answers to the problem are wrong. So when politicians like Hillary Clinton say we should have more gun control, I side with police chiefs who recognize that an armed citizenry is a much more effective approach.

Simply stated, we’re dealing with evil people who want to maximize death, so they pick out places where they are less likely to encounter armed resistance.

The European response to terrorism is especially insipid. Law-abiding people are disarmed while terrorists have no problems obtaining all the guns they need.

Which leads to terrible consequences with tragic regularity.

I’m not sure how to categorize this sarcastic look at how Europe responds to a terror attack compared to how Texas responds, but it does make the key point that it’s better to shoot back than die meekly.

Consider this the terrorism version of the joke comparing how the governors of Texas and California respond to a coyote attack.

Though this is a deadly serious issue, not a joking matter.

P.S. If you want some genuine terror-related humor, look at the bottom of this post.

P.P.S. And if you want something truly pathetic, look at how statists try to rationalize terrorism.

Thomas Sowell on Redistribution: Quicksand at One End, Beatings at the Other