HomePolicyCalifornia Bullet Train Off the Rails on Budget: Plagued by Delays, Cost Overruns

California Bullet Train Off the Rails on Budget: Plagued by Delays, Cost Overruns 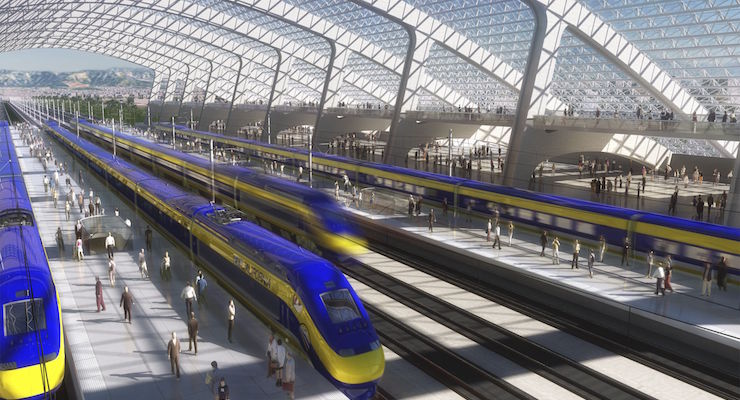 When politicians create programs and announce projects, they routinely lie about the real costs. Their primary goal is to get initial approval for various boondoggles and they figure it will be too late to reverse path once it becomes apparent that something will cost for more than the initial low-ball estimates. Obamacare is a classic (and discouraging) example.

This scam is particularly prevalent whenever politicians decide to build infrastructure. And there are lots of local examples in the Washington area.

But it’s definitely not limited to Washington. There are ridiculous examples of cost overruns elsewhere in the world.

And it goes without saying that places controlled by statists often produce the most absurd examples of wasteful boondoggles. Indeed, is there anyone in the world surprised to see this headline from a story in the Los Angeles Times?

Here are some of the details from the report.

A confidential Federal Railroad Administration risk analysis, obtained by The Times, projects that building bridges, viaducts, trenches and track from Merced to Shafter, just north of Bakersfield, could cost $9.5 billion to $10 billion, compared with the original budget of $6.4 billion. …The California High-Speed Rail Authority originally anticipated completing the Central Valley track by this year, but the federal risk analysis estimates that that won’t happen until 2024, placing the project seven years behind schedule.

Over budget and overdue? Gee, who could have predicted that would happen with a government infrastructure project (other than every single person with an IQ above room temperature).

What happens next is unclear. The federal bureaucracy that disburses grants presumably wants to keep the gravy train on the tracks (pun intended), though hopefully Congress will tell California there won’t be any more federal handouts.

The Federal Railroad Administration is tracking the project because it has extended $3.5 billion in two grants to help build the Central Valley segment. …Rep. Jeff Denham (R-Turlock), chairman of the House rail subcommittee, said Friday… “Despite past issues with funding this boondoggle, we were repeatedly assured in an August field hearing that construction costs were under control,” he said in a statement. “They continue to reaffirm my belief that this is a huge waste of taxpayer dollars.” …About 80% of all bullet train systems incur massive overruns in their construction, according to Bent Flyvbjerg, an infrastructure risk expert at the University of Oxford who has studied such rail projects all over the world.

Unsurprisingly, the various interest groups that are feasting on this boondoggle want it to continue, whether the money comes from federal taxpayers or state taxpayers.

The California system is being built by an independent authority that has never built anything and depends on a large network of consultants and contractors for advice. …Proponents of the project, including many veteran transportation experts, have said that California’s massive economy can handle higher costs for the project — even more than $100 billion — by increasing sales taxes.

For what it’s worth, I don’t particularly care if California voters want to squander their own money and hasten the state’s economic decline.

But I’m very much against the idea that my income should be forcibly redistributed to support this foolish bit of pork. And this is why I’m very nervous about Donald Trump’s infatuation with infrastructure. Though since he hasn’t provided many details, so we don’t know whether he wants a business-as-usual expansion of pork or a much-needed expansion of private-sector involvement. But I’m not optimistic.

Biggest Moochers: Which States Rely Most on Federal Aid?