An essential part of a free market economy is the price system. The competitive pricing of goods and services transmits information to producers and consumers and creates incentives for the efficient allocation of resources. Just as the circulatory system or nervous system enables our bodies to function.

And when you weaken or cripple markets with various forms government intervention (price controls, taxes, third-party payer, etc), that leads to distortions that reduce prosperity.

This is why “paycheck fairness” proposals to address the supposed “gender pay gap” are so risky for prosperity. It’s no exaggeration to say that these “comparable worth” schemes are designed to empower bureaucrats and politicians to override market forces.

What makes all this especially frustrating is there is no systemic discrimination against females in the workplace.

One of the leading scholars in this field is Christina Hoff Summers of the American Enterprise Institute. She has dissected the data and demonstrated that there is no gender pay gap once factors such as occupational choice and work hours are added to the equation. And now she has a must-watch video on the subject from Prager University.

All of her data is very compelling, but the most persuasive part of the video is at the beginning when she asks why profit-seeking businesses don’t fire men and hire women if there really is a wage gap.

Statists might respond that businesses are part of some evil patriarchy and that there’s some sort of oligopolistic conspiracy to forego income in order to oppress females. But if that’s what they really think, why don’t these leftists start their own businesses and take advantage of the supposed pay gap?

Not only would they earn large profits, but they would also bankrupt existing firms that ostensibly are engaging in discrimination.

And if they respond by saying that they don’t happen to have business skills because they chose to study more enlightened topics while in school, then ask them why progressive companies from France or Sweden aren’t entering the American market and earning lots of business?

Or are they part of the patriarchal conspiracy as well? Like almost all theories based on conspiracies, this is nonsense.

Let’s close with some wisdom on this issue from one of my colleagues at the Cato Institute. Vanessa Brown Calder cites a considerable amount of data on occupational choice, but also focuses on quality-of-life and family issues.

…women are considerably more likely to absorb more care-taker responsibilities within their families, and these roles demand associated career trade-offs. Sheryl Sandberg’s Lean In describes 43% of highly-qualified women with children as leaving their careers or off-ramping for a period of time. And a recent Harvard Business Review report describes women as being more likely than men to make decisions “to accommodate family responsibilities, such as limiting (work-related) travel, choosing a more flexible job, slowing down the pace of one’s career, making a lateral move, leaving a job, or declining to work toward a promotion.” It’s fair to assume that such interruptions impact long-term wages substantially. In fact, when researchers try to control for these differences, the wage gap virtually disappears. …It’s likely that other, more nuanced but documented differences, like spending fewer hours on paid work per week would explain some of the remaining five percent pay differential. 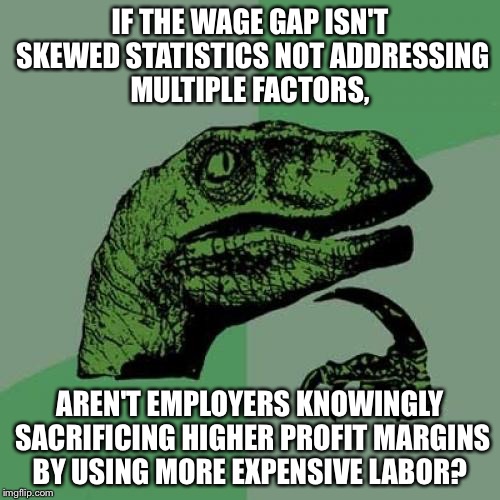 P.S. Given its track record of shoddy and biased output, is anyone surprised that the Paris-based Organization for Economic Cooperation and Development is pushing dishonest gender pay data?

P.P.S. Even the Obama-era Council of Economic Advisers had enough integrity to disavow the feminist pay-gap numbers.