Director of the Office of Management and Budget Mick Mulvaney (L) listens to U.S. President Donald Trump speak during a ”strategic initiatives” lunch at the White House in Washington, U.S., February 22, 2017. (Photo: Reuters)

President Donald Trump’s Budget Blueprint doesn’t thrill me, largely because it’s silent on the very important issues of tax reform and entitlement reform. All that he’s proposing is to rearrange the allocation of annually appropriated spending, or so-called discretionary outlays).

Here’s a chart from a summary prepared by the Committee for a Responsible Federal Budget. As you can see, the federal Leviathan does not shrink in size. 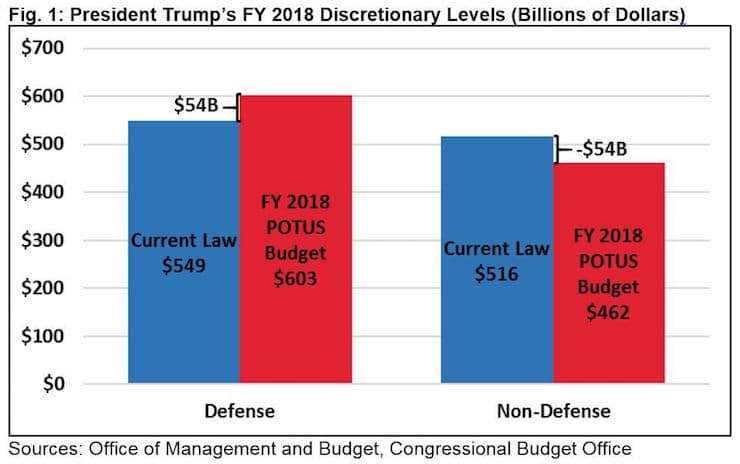 It’s possible, of course, to applaud this shift from domestic discretionary to defense discretionary. Or to criticize the reallocation. But nobody can pretend the net result is smaller government.

My view, for what it’s worth, is that we should accept all the domestic reductions but not boost the defense budget (the U.S. already has a very large military budget compared to potential adversaries).

And speaking of domestic reductions, the main focus of today’s column is to highlight one of my favorite program terminations in Trump’s plan (yesterday’s example was the National Endowment for the Arts). The President has proposed to eliminate all taxpayer handouts for the Corporation for Public Broadcasting (CPB), which is the entity that subsidizes National Public Radio (NPR) and the Public Broadcasting Service (PBS).

This is music to my ears. As I wrote more than six years ago,

Even if we had a giant budget surplus, federal subsidies for the Corporation for Public Broadcasting would be misguided and improper. In an environment

where excessive federal spending is strangling growth and threatening the nation’s solvency, the argument to defund PBS and NPR is even stronger…the fact that PBS and NPR have a statist bias is another argument for getting rid of taxpayer subsidies, but that’s barely a blip on my radar screen. It wouldn’t matter if government TV and radio was genuinely fair and balanced. Taxpayers should not subsidize broadcasting of any kind, period.

This should be a slam-dunk issue for congressional Republicans. Even milquetoast GOPers like Mitt Romney have said it’s time for NPR and PBS to be self-supporting.

But the best analysis, as usual, comes from the Cato Institute. Here are some excerpts from a study written by my colleague Trevor Burrus.

Assailed from all sides with allegations of bias, charges of political influence, and threats to defund their operations, public broadcasters have responded with everything from outright denial to personnel changes, but never have they squarely faced the fundamental problem: government-funded media companies are inherently problematic and impossible to reconcile with either the First Amendment or a government of constitutionally limited powers. The Constitution does not give Congress the power to create media companies, and we should heed the Founders’ wisdom on this matter. …before the Corporation for Public Broadcasting was created, nonprofit, noncommercial media stations enjoyed a vibrant existence, remaining free to criticize current policies and exhibit whatever bias they wished. Yet today…, public broadcasting suffers the main downside of public funding—political influence and control—yet enjoys little of the upside—a significant taxpayer contribution that would relieve it of the need to seek corporate underwriting and listener donations. But the limited taxpayer funding also shows that defunding can be relatively painless. Public broadcasting not only can survive on its own, it can thrive—and be free.

And Cato’s David Boaz adds another important point, which is that government-subsidized broadcasting is another odious example (Export-Import Bank, agriculture subsidies, TARP bailout, etc) of how government coercion is used to provide goodies to upper-income people at the expense of those with more modest levels of income.

By the way, these numbers are more than 10 years old, so more recent data surely would show that an ever greater share of fans are part of an economic elite that easily can afford to privately finance PBS programming.

By the way, there already has been some self-privatization, as John Stossel reports in his Reason column

New York ran a photo of Big Bird, or rather a protester dressed as Big Bird, wearing a sign saying “Keep your mitts off me!” What New York doesn’t say is that the picture is three years old, and Big Bird’s employer, “Sesame Street,” no longer gets government funds. We confronted the article writer, Eric Levitz. He said, “Big Bird has long functioned as a symbol of public broadcasting … Still, considering Sesame Street‘s switch to HBO, I concede that some could have been misled.” You bet. Big Bird doesn’t need government help. Sesame Street is so rich that it paid one of its performers more than $800,000.

Last but not least, here’s a video from Reason that looks at how government-run broadcasting is driven by the interests of the stations rather than consumers.

Best Trump Budget Cuts, Part I: Shutting Down the National Endowment for the Arts