Imagine that we’re in a parallel universe and that you’re the lookout on the Titanic. But in this make-believe world, you have all sorts of fancy radar that allows you to detect icebergs with lots of advance notice. Furthermore, imagine that you detect danger and give lots of warning to the Captain and other officers.

How would you feel if they then decided to ignore your warnings and continued on their course to disaster? You’d probably tear your hair out in frustration.

And that’s a pretty good description of how I feel about the easy-to-predict, visible-to-the-naked-eye, baked-in-the-cake, bound-to-happen fiscal crisis that will occur because of the combination of demographic change and poorly designed entitlement programs.

Simply stated, welfare states were created back when everyone assumed that there would always be a “population pyramid,” which means relatively few old people (who collect a lot of money from entitlement programs) at the top, plenty of workers (also known as taxpayers) in the middle, and lots of children (i.e., future taxpayers) at the bottom.

In that world, a modest-sized welfare state isn’t a good idea, but at least it is mathematically sustainable.

Today, by contrast, such a welfare state is a problem because we’re living longer and having fewer children.

And in the future, that kind of welfare state is a recipe for a Greek-style fiscal crisis because demographic trends will be even less favorable. To be blunt, there won’t be enough people pulling the wagon compared to the mass of people riding in the wagon.

At the risk of beating a dead horse, here’s some additional data on this global problem. We’ll start with this look at how the population pyramid is becoming a population cylinder. The key thing to notice is the growth of the over-65 cohort.

And here’s a different way of looking at the same data, but stretching out to 2100.

I didn’t add a red line at age 65, but it’s easy to see that the number of older people will dramatically increase without a concomitant increase in the number of working-age people who are expected to pay the taxes to finance pensions and health care. 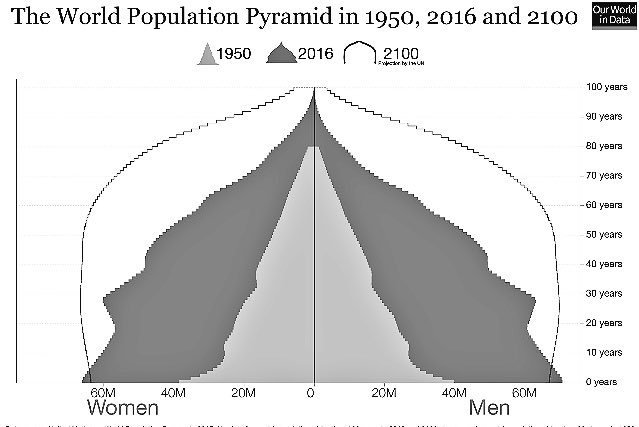 So what’s all this mean? Here’s a sobering thought from Prospect.

The ageing populations of the advanced economies and the larger emerging ones combines with past falls in the birth rate to mean that the share of total world population who are of prime working age has been falling since 2012. After a four-decade rise, the trend has reversed with that fall projected to last throughout the 2020s, 2030s and 2040s. A slower-growing global workforce will be a big challenge for the global economy.

A “big challenge” may win the prize for understatement.

Bloomberg has a column on the implications of this massive demographic shift. Notice the data on the number of workers per retiree in various nations.

The bottom line is that there are enormous unfunded liabilities.

Arnaud Mares of Morgan Stanley analyzed national solvency, or the difference between actual and potential government revenue, on one hand, and existing debt levels and future commitments on the other. The study found that by this measure the net worth of the U.S. was negative 800 percent of its GDP; that is, its future tax revenue was less than committed obligations by an amount equivalent to eight times the value of all goods and services America produces in a year. The net worth of European countries ranged from about negative 250 percent (Italy) to negative 1,800 percent (Greece). For Germany, France and the U.K., the approximate figures were negative 500 percent, negative 600 percent and negative 1,000 percent of GDP.

Wow, it’s depressing that the long-run outlook for the United States is worse than it is for some of Europe’s most infamous welfare states. Though I guess we shouldn’t be totally surprised since I’ve already shared similarly grim estimates from the IMF, BIS, and OECD.

I’ll close with some (sort of) good news.

Notwithstanding some of the estimates I’ve shared, America actually is in better shape than these other nations. If we enact genuine entitlement reform, ideally sooner rather than later, the long-run numbers dramatically improve because spending and debt no longer would be projected to rise so dramatically (whereas government already is an enormous burden in Europe).

This isn’t idle theory. Policymakers don’t have much control over demographics, but they can reduce the fiscal impact of demographic change by adopting better policy.

To cite the most prominent examples, jurisdictions such as Hong Kong and Singapore have very long lifespans and very low birthrates, yet their public finances don’t face nearly as much long-run pressure because they never made the mistake of setting up western-style welfare states.

The solution, therefore, is for America and other nations to copy these successful jurisdictions by replacing tax-and-transfer entitlements with systems based on private savings.

P.S. For what it’s worth, I’m not overflowing with optimism that we’ll get the reforms that are needed with Trump in the White House.

Now There Are Four: Another Honest Liberal Debunks Gun Control

Child Labor, Economic Development, and the Folly of Good Intentions