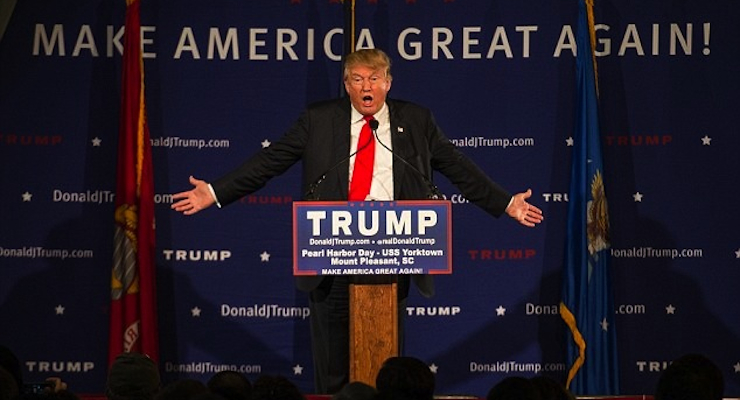 Since Donald Trump announced in June he was running for president, the conventional “wisdom” from tired pundits and Establishment elites has held the current Republican frontrunner will cost the party the White House in 2016. The argument, so it goes, contends the billionaire real estate mogul’s brash, not-so politically correct tone will alienate minorities and damage the party brand.

While it may seem simple enough to the casual observer and voter, considering the demographic shifts in the American electorate, the aggregate and latest polling data simply do NOT support their argument. The fears they have been trying to project on GOP primary voters in order to place doubt on Trump’s electability appear to be rather unfounded, at least in the short-term.

First, immediately after his announcement at Trump Tower, during which he promised to crack down on illegal immigrants and make Mexico pay for a wall on the southern border, we conclusively showed that Americans agreed with him and couldn’t understand the media backlash. Then, when he released his immigration plan, we showed you point-by-point that a majority of Americans supported the specifics of the plan.

The latest controversy came Monday night when Trump called for a total moratorium on Muslim immigration. With the Establishment in both parties believing it is their best chance yet to put big donors back in the driver seat, everyone from former vice president Dick Cheney to longtime Clinton aide and “proud Muslim” Huma Abedin (who has family ties to the Muslim Brotherhood), condemned Trump for the proposal.

Even his fellow Republican rivals who had previously taken a pass on criticizing him, took to Twitter or the press to trash the frontrunner. But we find again that those condemnations don’t exactly echo where voters stand, and not just Republican voters.

In a Rasmussen Reports survey taken prior to the attack in San Bernardino, Calif., half of all likely voters said they did not want the U.S. to take in any Muslim immigrants from the Middle East, at all. Zero. On the refugee issue–again, prior to California–60% said they did not want the president’s program to relocate “asylum-seekers” from the Middle East to their state.

The latest FOX Poll showed a majority of Republicans, Democrats and independents believed at least one Syrian refugee will come to the U.S. intending to carry out a terror attack, and will succeed.

Contrary to the assertions heard in the media and the Oval Office, Americans–including Trump supporters–are not xenophobic. They have common sense.

According to a new Gallup survey, the number of Americans expressing confidence in the government to protect the nation from future terrorist attacks was at the lowest level ever recorded in the history of this trend question, which began in late 2001. Overall, public concerns about the possibility of future terrorist attacks in the U.S. rose this year by 12 percentage points, up from 39% who expressed “a great deal of concern” in 2014 to 51% in 2015.

Terrorism has become the third-highest on the list of 15 concerns posed in the Gallup poll, placing behind only healthcare and the economy. It was number one in the minds of voters in the latest FOX Poll released just before the San Bernardino terror attack. The same poll found only 33% approved of Obama on the issue, while nearly two-thirds disapproved.

Now, the latest Gallup tracking on party preference shows the Republican Party has steadily made gains relative to the Democratic Party since Trump announced, despite the repeated controversies and doom-and-gloom predictions that never came to fruition. The GOP closed a 7-point deficit during the “Summer of Trump” to a tie at 42%.

What seemed most interesting in the latest survey to someone who has been arguing the party’s brand issue comes from within, is that they’ve modestly lost ground relative to Democrats last month in the wake of the constant Establishment barrage and backlash against Trump. During the same period, The Donald extended his lead over his closest rival in the crowded Republican field to 20 points.

“While some observers may have predicted that the controversial statements and positions of leading GOP candidates such as Trump and Ben Carson could hurt the party’s image, these results show that on the contrary,” said Jeffrey Jones of Gallup. “The Republican Party’s standing relative to the Democratic Party has improved since the spring. Given usual Republican advantages in election turnout, having party preferences closely divided among national adults would be a sign of a potentially strong Republican year.”

Worth noting, a large majority of American voters also agreed with Ben Carson when he said central tenets of Islam are not compatible with the U.S. Constitution, thus they would not vote for a Muslim for president.

That’s not to overplay the GOP’s hand this cycle, as Jones also noted how the 2015 trend shows “party preferences can shift over the course of a year, and one party can gain, or lose, an advantage fairly quickly.” Following the 2014 midterm blowout, voters’ party preference predictably shifted dramatically toward the GOP. That tends to happen after a party has a big year, as was the case following the 1994 Republican Revolution.

But it quickly faded as the party’s base and independent-leaning voters began to turn on party leadership in D.C., as it became crystal clear they were unwilling to keep campaign promises.

Donald Trump had nothing to do with that. Tarnishing the party brand in the aftermath of a historic landslide victory was all Establishment. Karl Rove and Jeb Bush can make all the anecdotal arguments they want and, who knows, perhaps the party gets wiped out in the end. Political events can shift public opinion wildly, so very little surprises me anymore.

However, as of now, the polls simply do not support these arguments. Polls and the campaign trail show Trump is drawing in new voters to the party and energizing crucial elements of the base. If the party comes unglued this fall–or, even before at the convention–I would put my money on the Establishment tearing it apart, not Donald Trump.