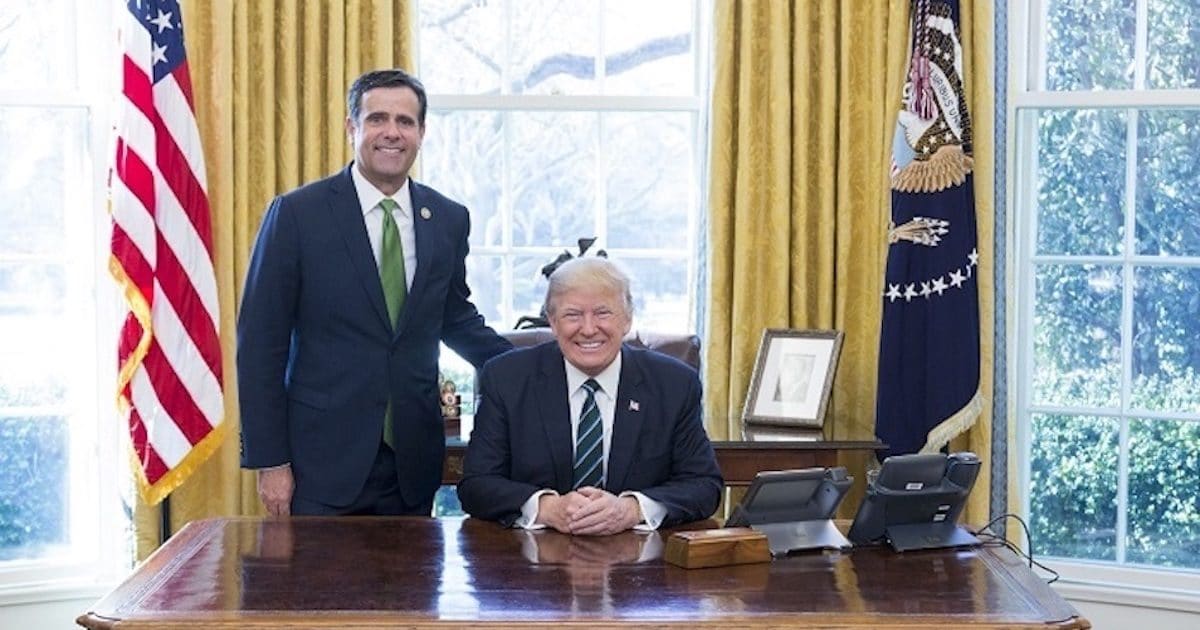 Rep. John Ratcliffe, R-Tx., on Friday withdrew his name from consideration to replace Dan Coats as the Director of National Intelligence (DNI). The withdrawal came only days after President Donald Trump announced that Director Coats would step down this month.

Director Coats, a former U.S. Senator from Indiana, has held the job since March 2017.

“While I am and will remain very grateful to the President for his intention to nominate me as Director of National Intelligence, I am withdrawing from consideration,” the Ranking Member of the House Subcommittee on Crime, Terrorism and Homeland Security tweeted on Friday.

Critics argued he didn’t have the experience to run the Office of the Director of National Intelligence (ODNI). Senate Minority Leader Chuck Schumer, D-N.Y., said it would be a “big mistake” to confirm him “to a position that requires intelligence expertise and non-partisanship.”

President Trump said on Friday at the White House he thought Rep. Ratcliffe “was being treated very unfairly.”

“He doesn’t deserve it,” the President told reporters. He announced the withdrawal of Rep. Ratcliffe’s name from consideration and his intent to nominate on Twitter.

But according to sources with knowledge of the events, it was Senate Majority Leader Mitch McConnell, R-Ky., and two other Republican Senators who sank the intended nominee before the formal nomination. Further, their reasons appear to be unrelated to his job qualifications.

Sources tell PPD that President Trump, Vice President Mike Pence and acting White House Chief of Staff Mick Mulvaney were willing to fight for what was expected to be a tough nomination battle.

The White House strategy was to allow political opponents to have their attacks following the announcement. They would not hold a press conference or respond until the political storm calmed. Rep. Ratcliff agreed under the condition the majority leader would have his back.

Instead, Senate Majority Leader McConnell refused to meet with Rep. Ratcliffe after the announcement, at best putting him off for at least a few weeks.

Senator Richard Burr, R-N.C., the Chairman of the Senate Intelligence Committee who would’ve presided over confirmation hearings, said publicly he would “work to move it swiftly through regular order” after the White House sent the formal nomination.

But privately, he was a “hard no,” according to sources.

“Burr was the big schemer,” one source, who spoke to PPD on the condition of anonymity, said. The scheme was to sabotage Rep. Ratcliffe to force President Trump to nominate ODNI Principal Deputy Director Sue Gordon, who by federal law is next in line to take over as acting DNI.

Senator Mark Warner, D-Va., the Ranking Member of the Senate Intelligence Committee, agrees. He tweeted “the President should take this opportunity to nominate a DNI in the mold of Dan Coats,” an intelligence insider.

“He [Burr] has more in common with Warner than he does with Trump on this and they want a more intelligence community-friendly nominee,” another source added. “Someone more like Coats.”

After the U.S. Senate voted 85 to 12 to confirmed him on March 15, the committee undertook what media and D.C. framed as “the serious investigation” into Russian interference. The comparison aimed to downplay findings from the more skeptical House Intelligence Committee.

While ultimately concluding there was no evidence to support allegations of collusion between members of the Trump Campaign and Russia — the same conclusion reached by the House a year earlier — the committee was not without embarrassment.

James A. Wolfe, the committee’s longtime director of security, pleaded guilty in October 2018 to making false statements to federal agents during the course of an investigation into the unlawful disclosure of classified information.

In May, Attorney General William Barr assigned U.S. Attorney John H. Durham in Connecticut to conduct an investigation in to the origins of and potential wrongdoings in the Russia probe. Director Coats and FBI Director Christopher Wray have been less than cooperative with investigators.

But Rep. Ratcliffe supported the investigation, has long-been skeptical of unfounded allegations of collusion, and likely would’ve been more forthcoming with investigators.

Senator Susan Collins, R-Me., found that skepticism problematic. She was also a “no” specifically because she felt Rep. Ratcliffe was too tough on former Special Counsel Robert Mueller during testimony under oath last month.

Mr. Mueller, the former figurehead of the Investigation into Russian Interference in the 2016 Presidential Election, testified before House Committees on July 31. He appeared confused and contradictory as he faced questions from Republicans on the House Judiciary Committee.

One of the most damning moments for Mr. Mueller and Democrats came during an exchange with Rep. Ratcliffe, who argued the assertion that the investigation didn’t exonerate President Trump violated policy and a “bedrock principle of our justice system.”

Rep. Ratcliffe asked Mr. Mueller to identify a case in which the law “set forth a legal standard that an investigated person is not exonerated if their innocence from criminal conduct is not conclusively determined.”

“Can you give an example other than Donald Trump where the Justice Department determined an investigated person was not exonerated because their innocence was not conclusively determined?” Rep. Ratcliffe asked.

Mr. Mueller replied: “I cannot but this is a unique situation.”

“Okay, well you can’t–time is short, I got five minutes, let’s leave it at you can’t find it because–I’ll tell you why, it doesn’t exist,” he said. “The special counsel’s job didn’t say you were to determine Trump’s innocence or to exonerate him.”

“It’s not in documents, it’s not in the Office of Legal Counsel opinion, any justice manual… Respectfully it was not the special counsel’s job to conclusively determine Trump’s innocence.”

It is not accurate for Republicans to claim experience was the predominant factor, according to sources. Senator Collins, an important member of the committee and swing vote, found the exchange disqualifying, though it was irrelevant to his job experience.

Records at the Justice Department (DOJ) show Rep. Ratcliffe was assigned to more than 40 cases related to terrorism. Critics point out only one of them led to criminal charges — a case involving a stolen Social Security number. The defendant pleaded guilty and was sentenced to six months in jail.

Then-U.S. Attorney Ratcliffe was named special prosecutor to investigate concerns of jury tampering during the trial against the Holy Land Foundation for Relief and Development (HLF). He spent over four months investigating the conspiracy that resulted in a mistrial.

The Washington Post published a report suggesting he embellished the record. But most of the details surrounding the investigation were sealed. Further, The Post’s source is the lawyer for the defendants.

Neither the lawyer nor the family had contact with Mr. Ratcliffe. The details would not have been disclosed to them given they were the subject of the investigation.

Five of its leaders were subsequently convicted in November 2008 on charges of providing material support to Hamas, a designated foreign terrorist organization. U.S. District Judge Jorge A. Solis sentenced them to prison terms ranging from 15 to 65 years on May 27, 2009.

Nevertheless, President Trump and his top chieftains at the White House wanted to fight for Rep. Ratcliffe. But the nominee needed Majority Leader McConnell’s assurance and support.

In the end, he received neither.

This article was removed from the paywall for public interest reasons.

If you’d like to support data journalism and investigative journalism such as this, consider donating or subscribing to PPD.

Trump: "Our Nation Must Condemn Hatred, Bigotry and White Supremacy"