The United States is going to become another Greece, and it’s largely because of poorly designed entitlement programs. As the old saying goes, demography is destiny.

Let’s look at just one piece of that puzzle. James Capretta of the American Enterprise Institute has a very sobering summary of how Medicaid has metastasized into one of the largest and fastest-growing entitlement programs.

You should read the entire article, but if you’re pressed for time, I’m going to share two grim charts that tell you what you need to know.

First, we have a look at how the burden of Medicaid spending, measured as a share of national output, has increased over time. 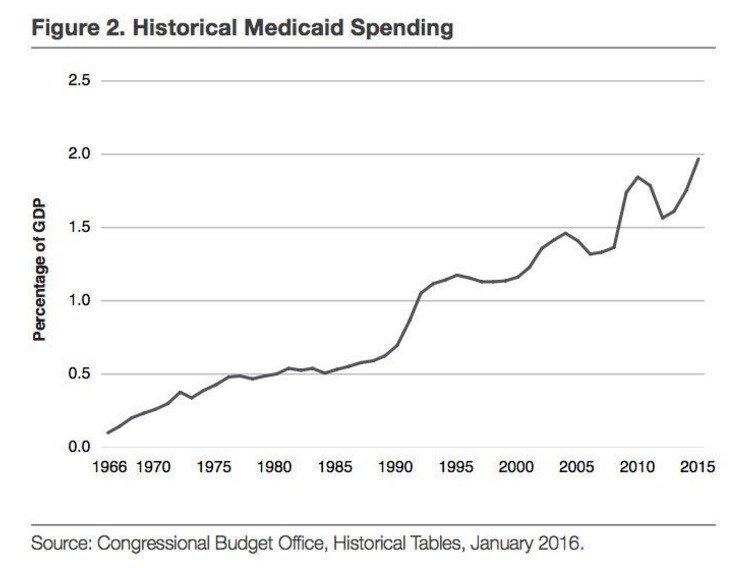 What makes this chart particularly depressing is that Medicaid was never supposed to become a massive entitlement program.

It was basically created so the crowd in Washington could buy a few votes. Yet the moment politicians decided that it was the federal government had a role in subsidizing health care for the indigent, it was just a matter of time before the program was expanded to new groups of potential voters.

And every time the program was expanded, that increased the burden of spending and further undermined market forces in the health sector.

This is why entitlement programs are so injurious to a nation.

But Medicaid isn’t just a problem because of its adverse fiscal and economic impact.

The program also is exacerbating the redistribution culture in the United States as more and more people get trapped in the web of dependency.

Which brings us to our second chart from Capretta’s article. Here’s a look at the share of the population being subsidized by Medicaid. 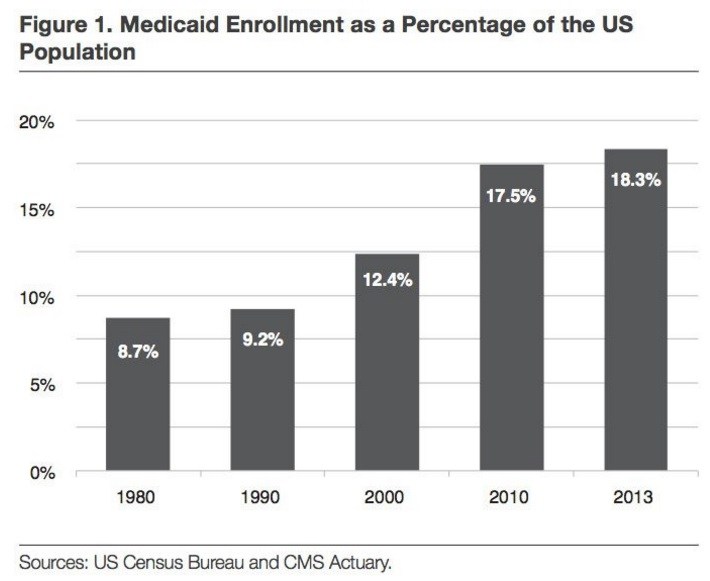 As a fiscal wonk, I realize I should care more about the budget numbers, but I actually find this second graph more depressing. In my lifetime, we’ve gone from a nation where the federal government had no role in the provision of low-income healthcare, and now nearly one out of every five Americans is on the federal teat.

Even though we’re far richer than we were in the mid-1960s when the program was created, which presumably should have meant less supposed need for federal subsidies.

For further background on the issue, here’s a video I narrated for the Center for Freedom and Prosperity.

I urge you to pay close attention to the discussion that starts at 1:48. I explain that programs with both federal and state spending create perverse incentives for even more spending. This is mostly because politicians in either Washington or state capitals can expand eligibility and take full credit for new handouts while only being responsible for a portion of the costs. But it also happens because the federal match gives states big incentives to manipulate the system to get more transfers.

Business Taxation and Connecting the Dots on Tax Rates, Tax Base, and Tax Revenue