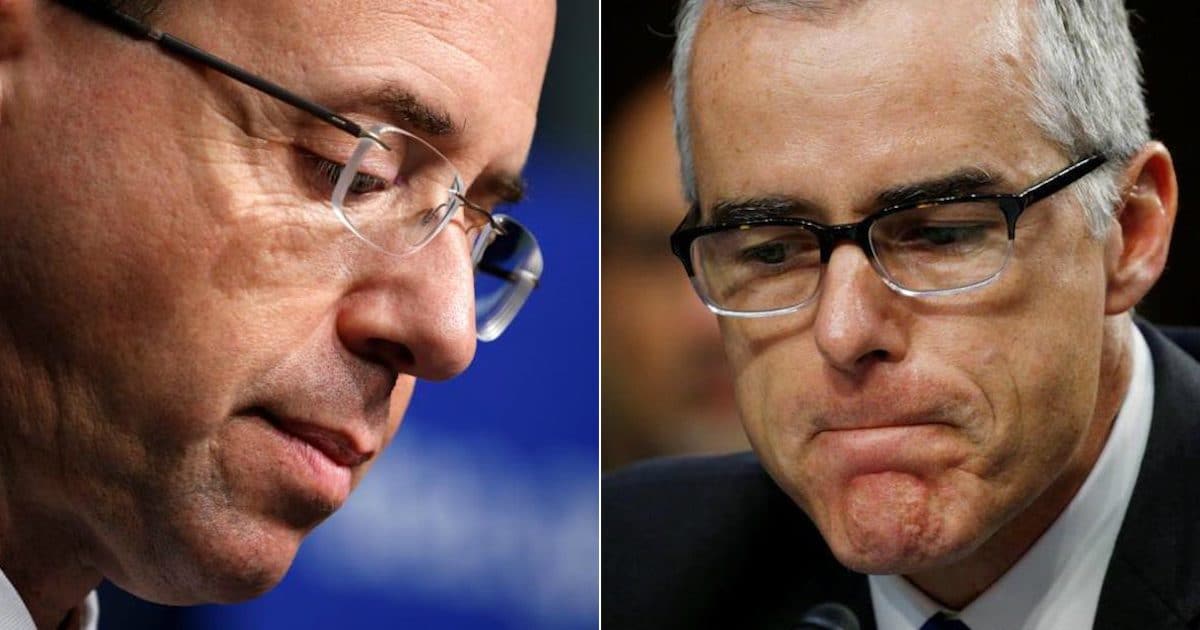 On Sunday, CBS “60 Minutes” aired an interview with Andrew McCabe, in which the former FBI deputy director admitted to a plan to remove Donald J. Trump as President of the United States.

Now, more voters than ever think it is likely a crime was committed against President Trump, and want a special prosecutor to investigate the investigators.

Fifty-six percent (56%) of likely voters believe senior officials at the Justice Department (DOJ) likely broke the law planning to oust the president, including 36% who say it is very likely and another 20% who say it is at least somewhat likely.

Mr. McCabe said in the interview that Mr. Rosenstein was “absolutely serious” when they discussed wearing a wire to record the president, and that a cabal was “counting votes” all in an effort to use the 25th Amendment to remove him.

The 25th Amendment was meant to answer a series of questions raised by the original U.S. Constitution’s treatment of presidential and vice-presidential vacancies, and presidential disability.

It was not meant to remove a president with whom the federal bureaucracy disagrees. Text and email messages show top officials at the Federal Bureau of Investigation (FBI) and DOJ wanted an “insurance policy” for themselves in the event Donald J. Trump won the 2016 presidential election.

Further, 51% think a special prosecutor should be named to investigate, while 38% disagree and 11% were undecided.

Only 36% say no disciplinary action should be taken against the senior law enforcement officials who discussed removing the president from office. Twenty-one percent (21%) say they should be fired, while even more (25%) think they should be jailed.

Twelve percent (12%) are calling for a formal reprimand of these officials.

Most of the players involved in what is proving to be an unfounded investigation into Donald Trump, have been fired or have resigned in disgrace.

Mr. McCabe was fired for lack of candor and leaking to the media for personal gain, and the Office of Inspector General (OIG) referred him to the U.S. Attorney in the District of Columbia for criminal prosecution. Rank-and-file FBI agents have offered to testify against him, and he has offered to provide emails incriminating to his former boss, James Comey, in exchange for immunity.

Mr. Comey was fired by President Trump. Mr. Rosenstein reviewed the handling of the investigation into Hillary Clinton’s use of a private email server, and provided the recommendation to fire Mr. Comey.

Peter Strzok, the former head of the FBI counterintelligence unit that started the counter-intel probe against the president, has been fired.

Lisa Page, Mr. Strzok’s extramarital lover and former FBI lawyer, resigned in disgrace and is cooperating with investigators. She resigned along with and at the same time as Peter A. Baker, the former FBI general counsel who told investigators about the plan to remove the president.

Bruce Ohr, then the fourth highest-ranking official at DOJ, was demoted not once but twice. His wife worked for the shadowy smear firm Fusion GPS, which hired former British MI6 officer Christopher Steel to compile the dossier.

It was deceptively used to obtain warrants to spy on Team Trump, without disclosing it was opposition research funded by the Clinton campaign and Democratic National Committee (DNC).

The national telephone and online survey of 1,000 likely voters in the U.S. was conducted February 17-18, 2019 by Rasmussen Reports. The margin of sampling error is +/- 3 percentage points with a 95% level of confidence.

Did the Floor on Trump's Approval Rating Rise After the State of the Union?