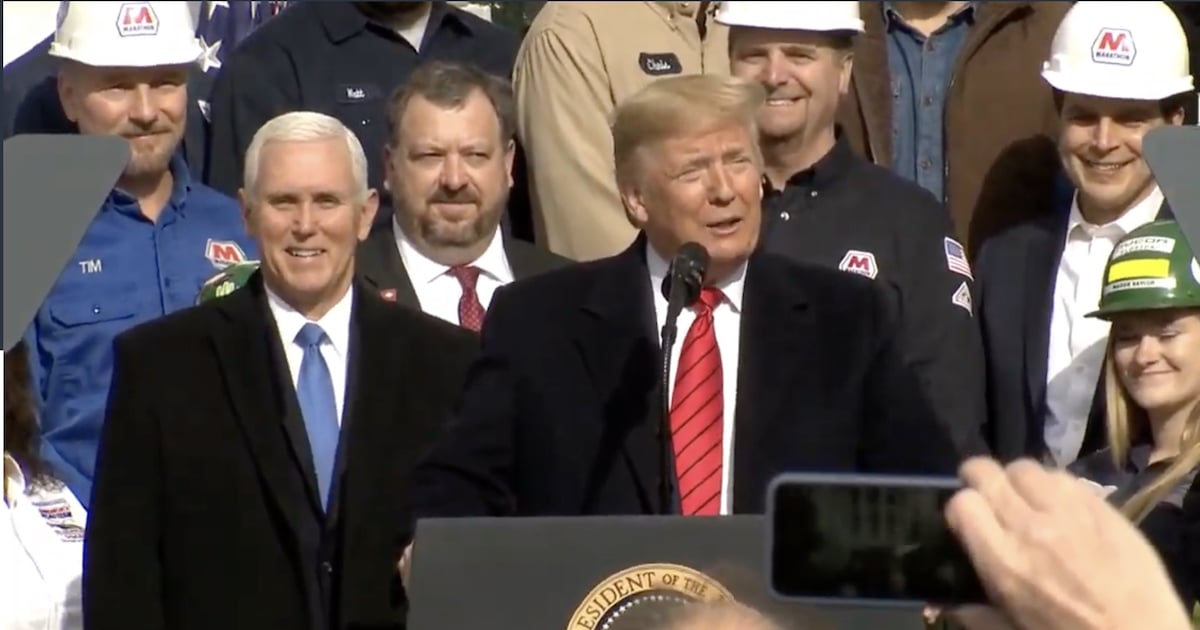 “Today, we’re finally ending the NAFTA nightmare and signing into law the brand-new U.S.-Mexico-Canada Agreement,” the president said. “The USMCA is the largest, fairest, most balanced, and modern trade agreement ever achieved.”

“This is a colossal victory for our farmers, ranchers, energy workers, factory workers, and American workers in all 50 states and, you could almost say, beyond — because it’s all beyond. “

The USMCA is estimated to add another 1.2% to U.S. gross domestic product (GDP) and create tens of thousands of manufacturing jobs, alone.

“It will make our blue-collar boom — which is beyond anybody’s expectation — even bigger, stronger, and more extraordinary, delivering massive gains for the loyal citizens of our nation,” he added.

“And, in a true sense, it’s also a partnership with Mexico and Canada and ourselves against the world.”

In 2016, the president made the renegotiating of the North American Free Trade Agreement (NAFTA), and other trade deals, central to his campaign message. Fifty-one percent (51%) of likely voters in a recent poll favored the renegotiation of NAFTA, while just 35% opposed it.

“We really put our heard and soul into this. It’s probably the number one reason why I decided to lead this crazy life,” he said in jest.

He noted how presidents have long campaigned on trade and promised to end the hollowing out of the manufacturing base in the Midwest and across the nation. But it never happened.

Only two days after his inauguration, President Trump signed executive orders stating his intention to renegotiate NAFTA and withdraw from the Trans-Pacific Partnership (TPP). Promising to take those actions alone won him Rust Belt states no Republican had carried since the 1980s.

By April, the White House announced the president had already convinced Mexico to come back to the table to negotiate a new agreement.

In January, President Donald Trump’s approval among farmers ticked even higher to 83%, the highest level ever measured by the Farm Journal Pulse Poll. The percentage of farmers who “strongly approve” of the president’s job performance rose to 64% in January, up from 61% at the end of 2019.

Only 16% disapprove, down one point from December.

The new record comes as the president touts trade accomplishments promised during the 2016 campaign. The president negotiated and signed Phase One of the U.S.-China Trade Deal in mid-January.

“Thanks to your leadership Mr. President, the era of NAFTA ends today and new era of growth and jobs begins,”

Vice President Mike Pence said the era of NAFTA ends today and a new era of growth and jobs begins.” He thanked the president for challenging the party and the American people “to think about international trade in new ways.”

He added that he saw firsthand how NAFTA hollowed out communities and outsourced American jobs. According to the U.S. Bureau of Labor Statistics, the vice president’s home state of Indiana alone lost roughly 18% of the manufacturing industry during the period 1994 to 2015, years impacted by NAFTA and the World Trade Organization.

Vice President Pence declared the days of hollowing out were over and touted gains already made in wages.

“Wages are rising across the board, but they’re rising the fastest among blue collar, hardworking Americans. As a son of the heartland, let me say, I couldn’t be more grateful.”

While Democrats delayed action on the trade deal to ensure total impact was not felt until after the 2020 president election, the signing of the United States-Mexico-Canada Trade Agreement (USMCA) is the biggest bipartisan achievement for the Trump Administration.